Another eavesdropping section must be completed at the start of the mission Run to the harbour and as you approach the barn they are meeting in, don’t just run straight in. The area is restricted and there are a lot of guards around so run to the back, jump up the boxes and through the opening near to where a guard is stood on the top rafters. Take him out from behind and you can listen in peace. 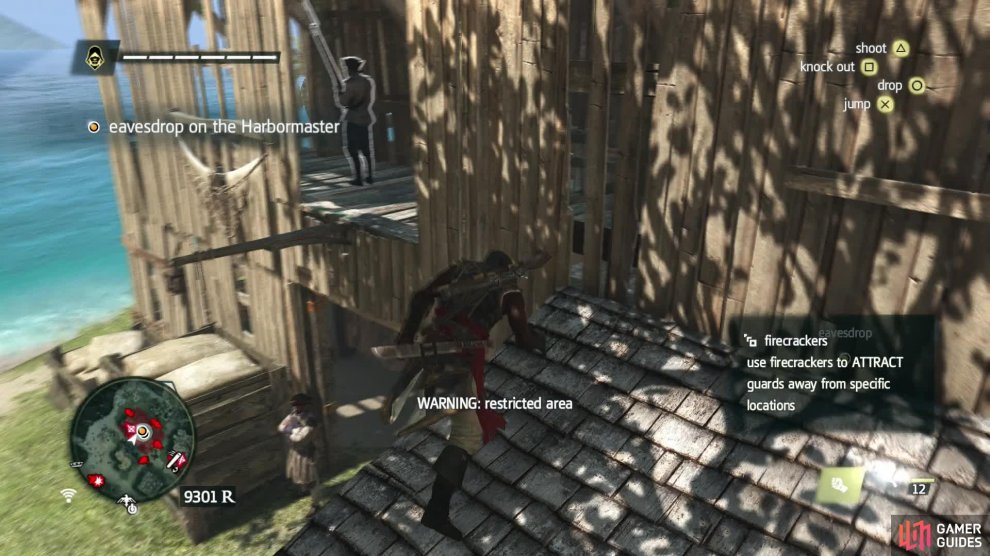 Complete at least 3 of 5 investigations into Godin

You must now complete at least three investigations into Godin out of a possible five. Each one is marked on the map by an orange marker. They all require you to do different things and if you kill anyone, you will fail one of the optional objectives so do remember to unequip your blades or macheté. Try and avoid jailers and other guards as you run around Port-au-Prince so limit the number of battles you’re involved in.

The first investigation is nearby at the end of the docks. You need to locate a thief on the ship docked there. Tag him with Eagle Vision and approach. As you get closer, he will panic and run away, diving into the water and trying to swim to shore. Dive off the dock after him and swim behind him until he gets out of the water. You should be close enough to tackle him now and once he’s down, loot him for the letter he carries. 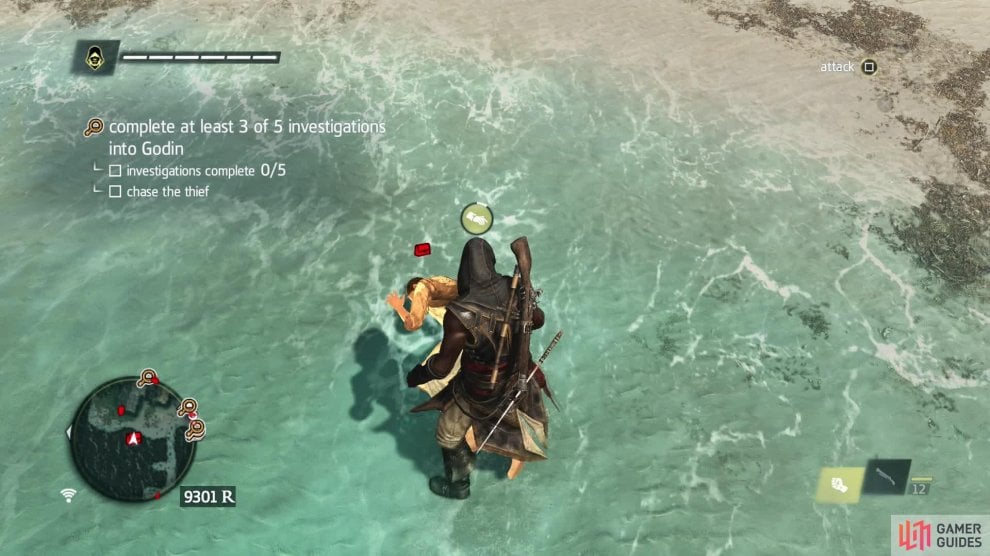 Investigation 2 - Locate the letter carrier and steal the letter

You will find this guy seated at a table gambling with another person. If you watch them for a while, they will finish and the guy will get up and walk away. Now is the time to steal the letter. Run around to the left side of the house the target was sat outside of and duck into the bushes here.

The target will pass along the road, moving left up the path here. There are a few guards around and some that end up patrolling very close to him so wait until he’s moved away from them before approaching him. When you’re in the clear, move up behind him and pickpocket him for the letter. 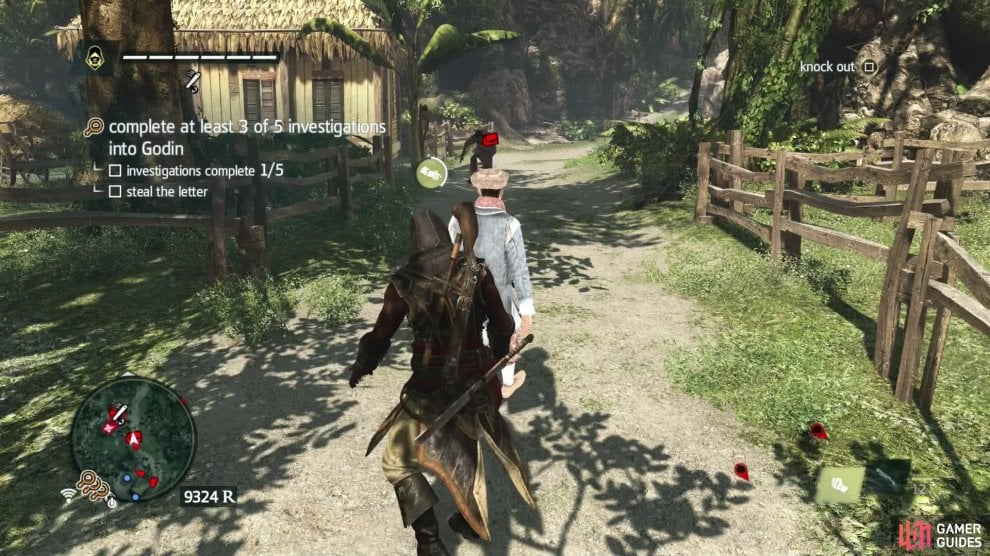 Investigation 3 - Eavesdrop on the scientists

Head into the bushes where the green marker is to begin the sequence. The pair will move up the alley and so you should follow them behind the fence and then climb up the building. They will stop for a while and carry on chatting but won’t see you if you keep off the ground. Use the trees to continue your progress. You will want to climb up as far into the tree as possible because they will stop to knock on a door. When they turn around they will see you unless you are up high enough.

After they move off, jump across to the next building and walk across the rooftops and jump down to the lower roof. Follow them to the left until you get to the building at the end. They will head towards the hut in front of you for the final discussion so jump off behind them and run to the outside of the hut. Stay here until they’ve finished but do be aware you may have to readjust your position a bit for passing jailers or guards. 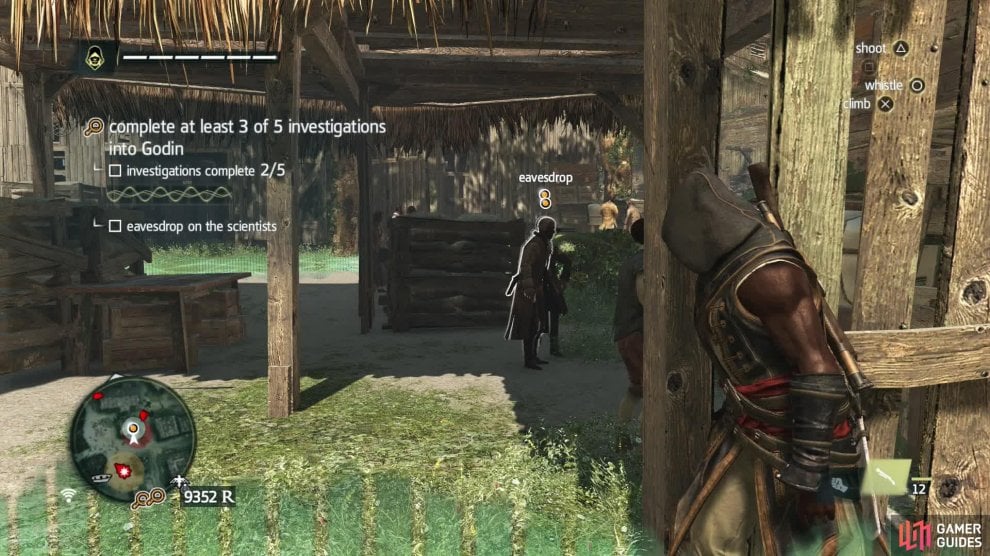 Investigation 4 - Locate and interrogate the messenger

Head to the green circle to locate the messenger. Use Eagle Vision to highlight him. He is stood against a wall next to another person but using Eagle Vision will mark the right one. Sneak up to the large tree and from here approach the guy who will then run off. Chase him down and tackle him to start the interrogation. 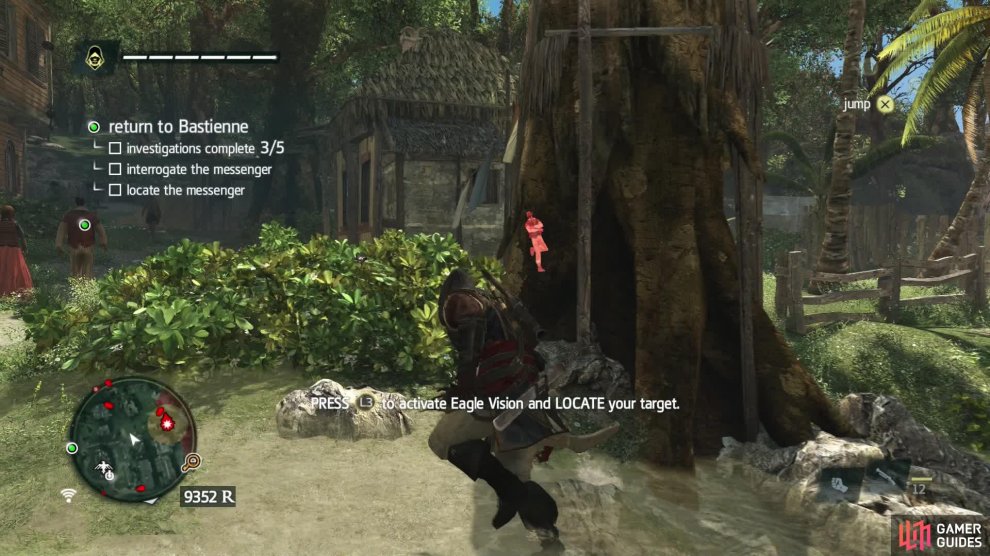 Talk to the guy on the stall to begin this investigation. He asks you to free some slaves to help his business so you’ll need to steal the key off the guard captain who carries it. Do not run straight over to the area. You’ll need to take a little detour off to the side to avoid all the guards and get a good vantage point where you can watch him safely until you’re ready.

Approach the area from the left side of the large group of buildings behind the stalls where the guard is. He will patrol back towards the slave cage for a quick inspection and then walk back again. When he turns on his heel to head back to the stalls, run to the bushes ahead just behind the auction platform and wait.

The guard will now walk over here, up the path and continue forward. Quickly follow behind him until he is far away from any guards. Pickpocket him for the key. You can now return to the slave pen and open it. 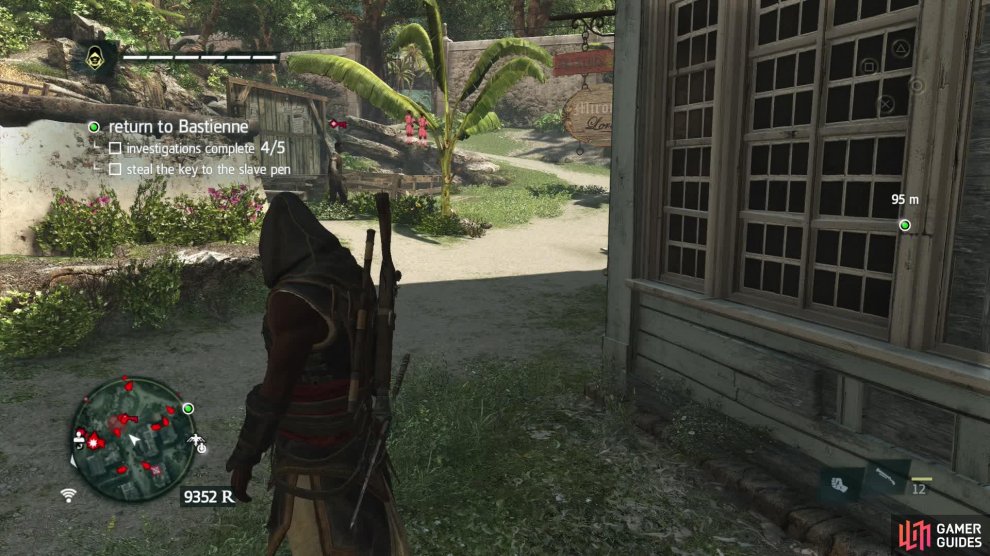 Equip sleep darts and approach the pen from on top of the hill behind it. The elevation allows you enough distance to stop the guards noticing any attempts to put them to sleep. There are three guards dotted round here that you’ll need to put to sleep .Once they’re all sleeping peacefully, jump down and open the pen. You can now return to the fisherman to complete the investigation.

Go and tell Bastienne everything you have discovered to complete this memory.