This part of the mission is essentially a series of four, sneak in and loot mini-missions. Once the mission has begun look at the map. There are four restricted areas here now, each of which has an objective marker indicating a gunpowder store that we want to pinch.

The goal at each of these locations is simply to steal the glowing crates; you can do this by sneaking in using your stealth techniques, or alternatively walk in in full sight, murder all of the enemies in sight and then loot the container as easy as you please.

Note that there are two optional objectives for this mission and one is focused on straight up combat (kill four guards in a single kill streak), whilst the other favours a more stealthy approach (use 10 blowpipe darts on guards). 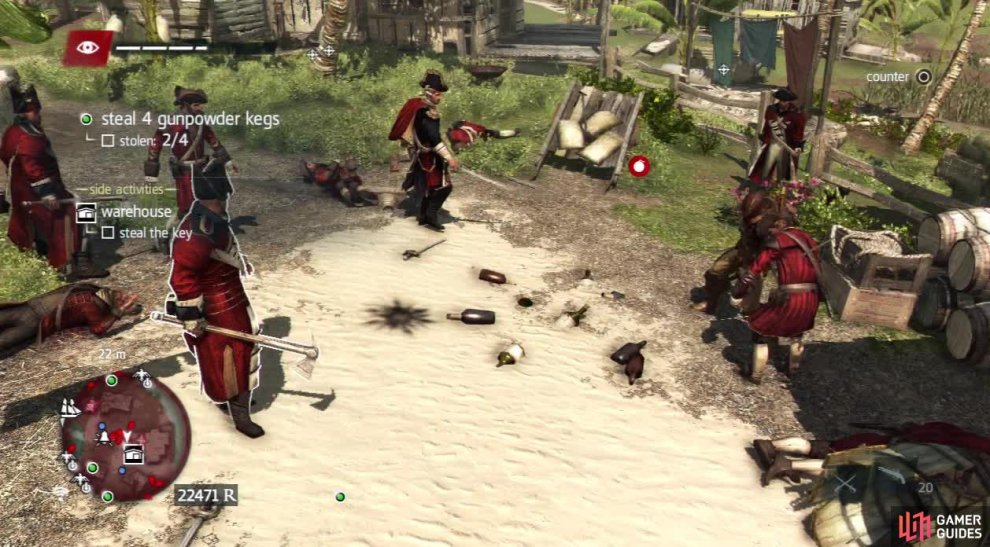 Each of the four locations is relatively easy to figure out and loot, just be sure to complete those pesky optional objectives before you loot the final chest.

Remember that using berserk darts on Brutes is a good way to create distractions and that sleep darts on Gunners are great for being stealthy. Also note that looting enemy bodies will often yield darts for your blowpipe in addition to bullets, so if you are the sneaky type, that is definitely worth doing! Once all four barrels of powder have been looted the mission will be complete.