Note: One of the chests contains a plan – Elite Ram.

Dive down and follow the path north. When it forks, take the left route and stay close to the seabed and move through the seaweed to avoid being spotted by the sharks patrolling above. As you move through the passage here, keep an eye out for a pair of jellyfish on the sunken ship to the right. They are hanging out by a hole that will allow us inside. Manoeuvre around the jellyfish and go inside for a chest.

Exit back to the previous pathway and continue until you reach an opening with an air barrel. Use this to replenish your air. Now continue to the north along the seafloor using the kelp to keep out of sight of the sharks. When you reach the air barrel, use it. Once you are done with the air barrel, enter the shipwreck just to the right. Avoid the jellyfish inside and open the chest. Exit via the hole in the hull to the right of the chest.

Upon leaving the hull, turn left and swim down to reach the seaweed below. When the sharks move away look up to the sunken ship in front and you’ll see an air barrel around half way up its side. Use this and then enter the window behind it. Go past the first doorframe and immediately turn right. Look around the corner here for an Animus Fragment. Turn around and enter the room opposite the fragment for a chest. Exit via the open window to the right.

Turn to the left and follow the line of the ship until you see an air barrel up on the deck to the right. Swim up and interact with this. Look just behind the wall nearby between the two sets of stairways to find another chest. Swim up the mast until you reach the second platform above. You’ll find another Animus Fragment here. 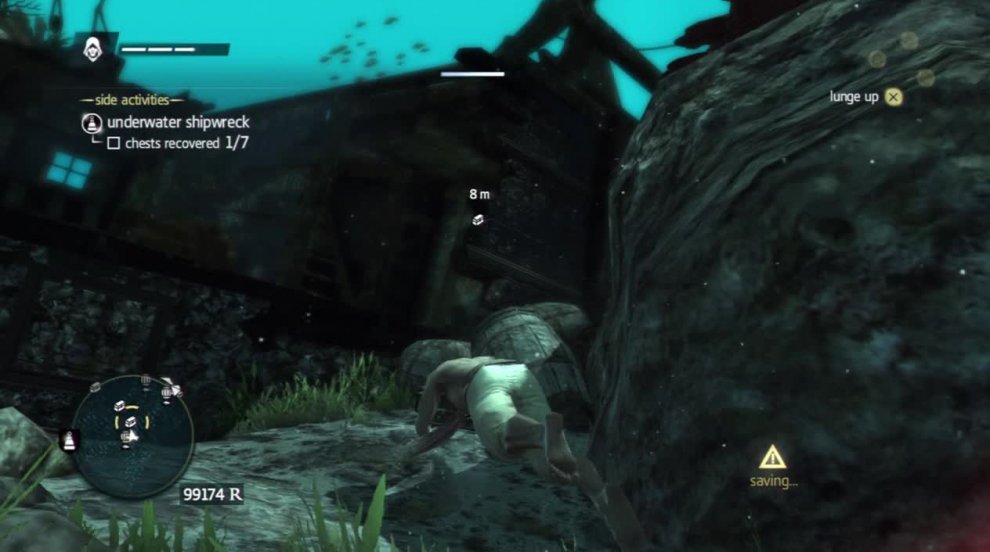 Return back down to the deck and follow it to the south. When you reach the hole in the centre, swim inside and look in the room to the right for a chest. Exit the area and swim up to the air barrel near the southern end of the ship. From here, you’ll see a shark patrolling back and forth and a chest just in a hallway to the right. When the shark moves away, quickly swim into the doorway and grab the chest.

Instead of going back out to meet the shark again, follow the hallway and take the stairs at the end. From the top, turn left and look in the corner of the end of the ship here for the final chest. Now swim over to the east of the ship to find the final Animus Fragment. Now quickly swim over and interact with the diving bell just to the south to return to the Jackdaw.