This page details where you can find all Super MIX.R Raids in Grounded. There are currently 3 Super MIX.R Raids, all of which are located in the Upper Yard. You’ll find one just southeast of the large car tyre, one under the lawnmower, and one in the Moldorc Highlands. If you’re looking for the locations of the 5 regular MIX.R Raids, see our page on those here.

The first thing you should know about the Super MIX.R Raids is that they’re much tougher than the 5 regular ones, which are linked to above. You’ll need to upgrade your armor and weapons as much as possible, construct substantial defences around the MIX.Rs, and ideally attempt to complete them with allies. However, don’t worry too much if you’re playing the game solo, you’ll just need to prepare a bit more to make sure that you’re strong enough to face the waves of enemies. You’ll be facing some of the most powerful bugs in the game during these raids, including the Fire Solider Ant,

If you’re at a stage in the game where you’re thinking about attempting these Super MIX.R Raids, you’ve probably already completed one of the regular MIX.Rs. The same basic principles apply: You will interact with the Super MIX.R and it will start to spin. The spinning speed will gradually increase as more and more enemies swarm the area and attempt to destroy the MIX.R. You will need to defend the MIX.R until the MIX.R Overdrive bar (top left of the screen) is filled, but if the health of the machine (top right of the screen) is entirely depleted, you will fail and you’ll need to use a Repair Tool on it before you can try again.

You won’t necessarily be attacked by a greater number of enemies during the Super MIX.R Raids, but the numbers will still generally increase over time. The real issue here is that you’ll have multiple tough bugs attacking you at once, such as the

Green Shield Bug. It will probably take you much longer to kill these than it did for the bugs you faced during the regular MIX.R Raids, so it’s important that you have stronger defences surrounding the Super MIX.R. If a bug breaks through as you’re trying to kill waves of them, they can destroy the machine in a matter of seconds.

Ash Wall. It’s worth taking the time to farm the materials for these items before you attempt the Super MIX.Rs, but if this is taking longer than you want to wait, you can try reinforcing them by creating multiple layers of walls with

Sturdy Wall panels. To further fortify your structures, you can make use of Spike Strips by placing them at the base of your walls. These will injure whatever creature gets caught in them, but keep in mind that each time the spikes inflict damage, their durability is reduced, so they will eventually be destroyed if a creature is caught in them enough times.

Ultimately, the power of upgrading your gear can’t be underestimated here. You will often benefit more from a fully upgraded (to level 9) Tier II Medium Armor set than you will from a Tier III Heavy Armor set that hasn’t been upgraded at all. Keep this in mind if you’re working towards making yourself tougher. The main thing you may want to consider is the set bonus for each armor set, then upgrade whichever armor set that your playstyle will benefit from most. See our page on Best Armor in Grounded for a full list of these.

The first Super MIX.R Raid that you’re likely to encounter is located just southeast of the large car tyre, as shown in the screenshot below. This is in an area where there’s a bank of mud on either side of the Super MIX.R, which you can construct defensive walls around. It’s worth considering the addition of Spike Strips being placed at the base of wall panels in the deepest part of the ditch, especially since most of the attackers will come from either side of the depression in the mud, rather than from above. At this stage you may even have access to the

Pebblet Turret or Explosive Bur Trap, both of which can be effective when defending against multiple enemies at once.

You’ll be facing the following types of enemies during this MIX.R Raid:

Roly Poly bugs are the toughest to take down here, so you may benefit from using

Gas Arrows to apply damage over time while you work on other enemies. You’ll need to avoid being in the gas cloud yourself though, as you can take damage from it if you’re too close. The fire ants will inflict massive damage if you don’t thin their numbers, so it’s a good idea to kill them first since they take a lot less time to eat through their relatively small health. The Ant-Nihilator mutation may be useful to that end, and don’t forget the Guard Dog mutation which will increase your damage against all creatures during these raids.

(1 of 2) The location of the Super MIX.R just southeast of the large car tyre.

The location of the Super MIX.R just southeast of the large car tyre. (left), There are two mud wall ridges on either side of this Super MIX.R, which you can use to frame your defensive structures. (right)

This MIX.R Raid is located to the northeast of the previous one. It’s directly underneath the Lawnmower here, which can be a fairly dark place during the night. You’ll benefit from attempting this raid in the day time for that reason, but you could always place some

Sap Sconce on the walls if necessary. The Super MIX.R under the Lawnmower is already partially protected for this reason, so you don’t have to worry about creatures coming from all directions. With that being said, you should still seek to construct walls all around the MIX.R, especially since the ants are capable of breaching even some of the smallest holes in your defences.

You’ll be facing the same enemies here as you were in the last MIX.R Raid:

As with the other Super MIX.R, the same guidance applies for this combination of bugs: try to distract the

Roly Poly bugs with something that will inflict damage over time on their substantial health bars, such as

Gas Arrows, while you thin the numbers of fire ants if they begin to overwhelm. The

Roly Poly is weak to Busting damage, and especially if it comes from a Spicy, Fresh, or Salty source. They’re resistant to Chopping, Stabbing, and Slashing, so try to avoid using these types of weapons if possible.

Roly Poly bugs are weakest at their legs, so if you can find a way to attack these you can kill them more quickly. One way of doing this is to build some stairs outside of your defensive walls, forcing the

Roly Poly to climb up and expose their legs. You can then hit them or shoot at them when you see an opening.

(1 of 2) The location of the Super MIX.R underneath the Lawnmower, in the northeast part of the Upper Yard.

The Moldorc Highlands Super MIX.R is located just next to the berry tree, as shown in the screenshot below. You can access this area from the Upper Yard by heading south from the Lawnmower. This is the last Super MIX.R that we recommend you attempt. It has a tough combination of enemies with the following:

This is a rough combination of enemies to defend against. You shouldn’t underestimate the power of a group of Tick bugs: they can inflict a lot of damage on you and your structures if you’re not careful, and they can jump over some defences. They are however weak to the Spike Strips, so be sure to use these at the base of your walls wherever possible. The Tick is resistant to Busting, Fresh, and Salty damage, but they’re weak to Spicy.

The Ticks are the least of your worries during this MIX.R Raid. After a brief initial wave of them, you’ll soon be attacked by a bunch of Tiger

Mosquito. These can inflict massive amounts of damage from the air, so you’ll need to make sure that you’ve build sturdy defences which cover the top of the MIX.R with multiple layers. The chances of the Tiger

Mosquito breaking through one layer is high for the duration of this raid. They are weak to Chopping and Slashing, with a particular weakness to Fresh damage, but they’re resistant to Busting.

Although it may be easier to attack the Tiger

Mosquito from range, you’ll kill them more quickly if you attack them in melee with a chopping or slashing weapon. To get close to them, you can create a platform above the MIX.R and use it to protect yourself from creatures below, while slashing at the Tiger

Mosquitos whenever they dive down at you. Placing spikes around the sides of a platform can also damage them as they dive, but you’ll need to be careful not to get caught in these yourself.

Mosquito during this raid, but the final type of enemy to arrive will be the

Green Shield Bug. These are incredibly tough bugs who are resistant to gas damage, resistant to Spicy, but weak to Fresh and Stabbing. You can get close with a stabbing weapon such as the

Tiger Mosquito Rapier initially, but you may soon need to step back away from the gas cloud. A

Gas Mask can be useful here, but it will soon be destroyed if you stay within the cloud for too long. The Rapier has the added benefit of healing you slightly with each hit, but this is unlikely to be enough for the whole duration of the fight. The best way to deal with these bugs is a combination of playstyles which includes running in and out of melee, and using ranged damage intermittently.

(1 of 2) The location of the Super MIX.R in the Moldorc Highlands.

The location of the Super MIX.R in the Moldorc Highlands. (left), This MIX.R is tucked into a corner near the berry tree. (right) 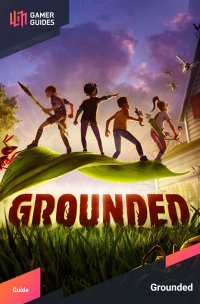 Grounded is a survival game published by Oblivion Entertainment. It has been in early access since July 2020, and was fully released on September 27th, 2022.

In this guide, you’ll find information on all essential aspects of the game: