You have two ways to reach Sunshade, Primrose’s starting city. You can either venture out from Clearbrook, or start from Rippletide. If you do the latter, you can stop by Cobbleston and have it for fast travel later on, whenever you do recruit Olberic. So, start off by fast travelling back to Rippletide for now. Note that you have the means to finish the remaining side story here, but let’s save that for later. Finish any business in the town, then take the eastern exit to East Rippletide Coast.

Unlike the last time you were here, you will be fully exploring it. Head south at the split and you will arrive at another fork in the road. Descend the stairs first to find a chest at the dead end (Magic Nut), then explore the path to the east of the bridge for another chest (Inspiriting Plum). Cross the bridge going south and follow the trail until you spot a hill to your west, which leads to another chest (Wind Soulstone). Run the rest of the way south to reach North Cobbleston Gap.

As soon as you cross the bridge, there will be a chest slightly hidden behind a bush, which contains a Light Soulstone. Continue south, opening the chest along the way (1,200 Leaves) and you will come to a split in the road. West leads to Stonegard, a higher-level area, while north will eventually bring you to Cobbleston. Start going north and immediately look northeast to see a chest, which you can reach by hugging the eastern wall as soon as you started going north (Inspiriting Plum). There is also a cave nearby, called Untouched Sanctum, which has a Danger Level of 15. It might be possible to explore it right now, but let’s save it for later.

Continue north now and follow the trail as it heads west, stopping when you can find a small path to the south, which leads to a chest (Healing Grape). Don’t return just yet, though, as there is a hidden path in the same area that leads down to a purple chest (need Therion), containing a Magic Nut. There will be a save point right before the exit to South Cobbleston Gap. 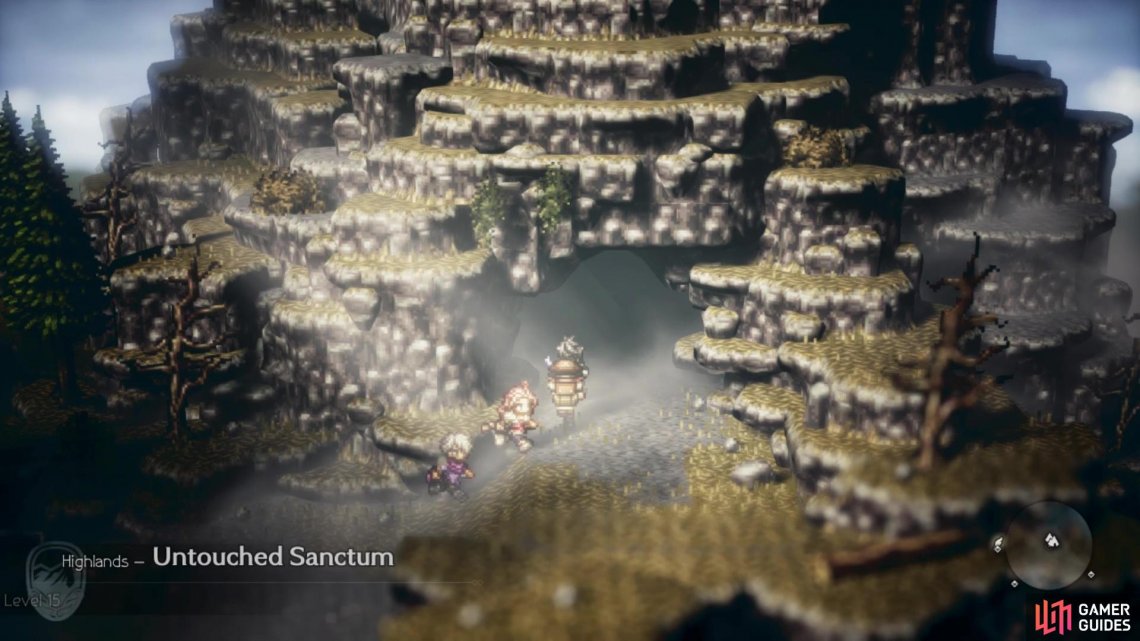 Remember the location of this dungeon, as you will need it later for a Side Story

Shortly before the path veers off to the east, there is a hidden alcove to the west that has a chest (Olive of Life). Keep going along the trail and open the chest that you see in plain sight (Healing Grape). To the west of that chest is a doorway in the mountain, which will lead you to another chest (1,000 Leaves). Return to the main path and go west, staying on the northern bit, until you eventually reach a dead end with a chest (Herb of Clamor). Head all the way north, up all the stairs, to a save point and the entrance to Cobbleston.

You can explore Cobbleston a little bit now, just to see what the townspeople have on them. You won’t find much when using Purchase/Steal, but Inquire/Scrutinize will turn up a few things. The Village Headman blocking the door in the southern portion will unveil a hidden item, inside of the house he’s blocking. Provoke him to get him out of the way, then head inside to find a War Lance, as well as a chest with a Healing Grape. The villager by the northeastern exit requires Alfyn to be level 12, but he also reveals a hidden item near the shop (Purifying Seed). If you think you’re up to the challenge, the other door that’s blocked (strength of 4) has a chest inside with a Captain’s Sword in it.

Exit the town for now and head all the way to the southern end of South Cobbleston Gap. There will be a chest in the southeastern corner, which contains an Herb of Awakening, plus the exit will be to the southwest.

This area is a little more open-ended in terms of the layout than others, but there isn’t too much to explore just yet. As soon as you enter, there will be a save point to your south, as well as a chest to your west, close to some rocks and a signpost (Healing Grape). If you take a quick venture south of that chest, you will find the exit to Northern Wellspring Sands, which has a Danger Level of 31, so avoid that for now. To the west of that is the exit to Southern Sunshade Sands, but that’s not where you’re going for now, at least. 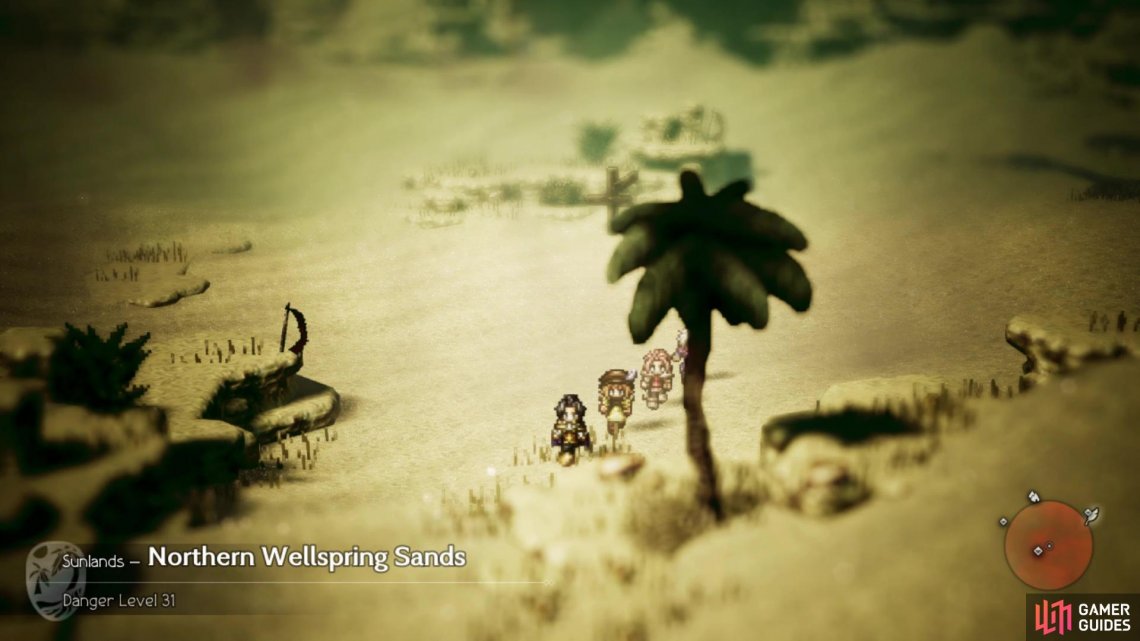 Unless you have a deathwish, avoid going into the Wellspring Sands for right now

Return to the first chest you got and head straight north to the edge of the map, where you’ll spot another chest near another rock formation (Olive of Life). West of that chest is an entrance to some cave, named Whistling Cavern, which has a Danger Level of 20. The enemies inside shouldn’t be too bad, but saving it for later is recommended. Just to the left of the Whistling Cavern is a chest, so open it for a Thunder Soulstone. Head back down south again and enter Southern Sunshade Sands.

In this new area, hug the wall to the south as you move west, where you’ll run into a chest that contains an Herb of Clarity. West of that is the exit to South Clearbrook Traverse, so forget about that and head to the northwestern corner of this area to find another chest (Inspiriting Plum). Double back to where you entered this area and hug the eastern edge as you move north, where you’ll find a chest with an Old Coin not too far above the jugs. North of there will be the town of Sunshade.