As already mentioned, the majority of the Chapter 3 stories will take place in the towns the second chapters took place. The only exception to this will be Olberic and Therion’s third chapters, as the town for those might not have been visited yet (although it was pointed out when going for the secondary job shrines). Cyrus’ third chapter will begin in Stonegard, so head on over there and use the tavern to start it.

Having found a translated copy of From the Far Reaches of Hell at the end of the previous chapter, Cyrus heads to Stonegard, as that is where the book was bound. Of course, what better place to look first than the actual bindery in town. This place is the very large building to the right of the tavern, so enter it and Scrutinize the only NPC you can interact with to find some information. It seems the employee sold a book to Dominic, a translator who lives on the east side of town.

Head straight east and the house you’re looking for is the last one before Stonegard Valleys. Approach his house and Dominic isn’t so willing to see anyone, so you’ll have to think of a different way to get him to talk. Naturally, Cyrus thinks that asking around will get him some information, so start by Scrutinizing the NPC in front of Dominic’s house, as well as the one inside of the small house next to his. The last one is in Stonegard Valleys, the eastern part of town, on the stairs as soon as you enter from the exit next to Dominic’s house. With all of this info, return to Dominic’s house for a scene, where you’ll have to answer some questions.

If you paid attention, the answers will be “His daughter” and “Translating a book.” With everything learned and said, Dominic tells you everything, as it turns out that Headmaster Yvon was the one who commissioned the book fifteen years ago. Some more stuff will play out and you will be heading to Yvon’s house next, which is located in the northern part of town. If you take the stairs in the first part of town, Yvon’s house will be straight ahead. Of course, it seems like Lucia set up a trap and you are in some hole inside of the house. 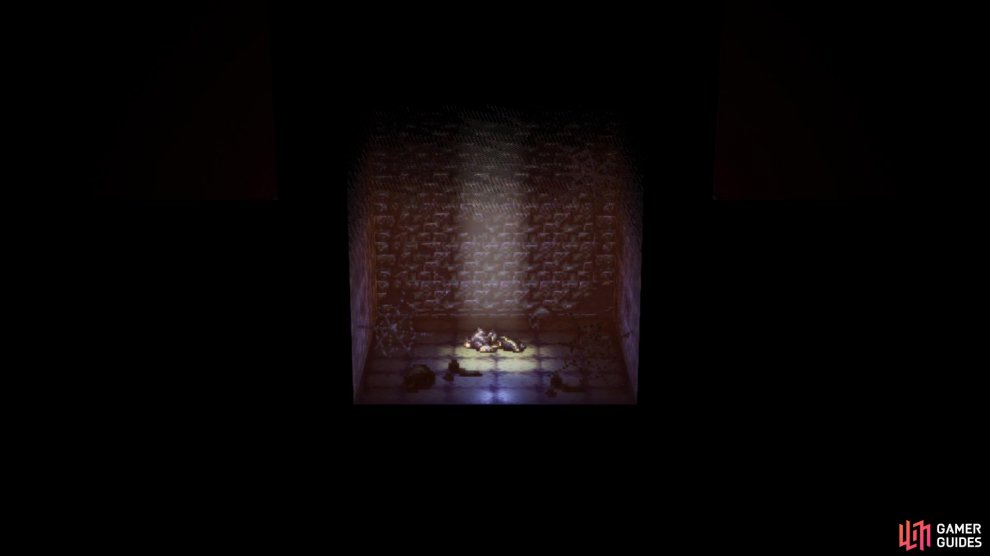 When you regain control, open the chest for a Bone, then walk around until you get a prompt to either investigate further or wait and see. Choose the second option and someone comes to rescue you, but after climbing out of the hole, Yvon takes her hostage and you will now be left to roam the house. The actual dungeon is in the basement, with its entrance on the west side, but don’t head down there just yet. Climb the stairs to the east and make your way to the room in the northwest corner, where a chest will be waiting (Inspiriting Plum). Now you can go down into the basement.

Upon entering, you can see you can go either left or right, plus there will also be a chest below you. For now, head left at the start and you’ll reach a dead end with a chest (Light Soulstone L). There is a secret passage next to this chest, leading to the other that you saw below you at the start (12,000 Leaves). Return to the beginning, heading right and go inside of the room you notice north of the stairs. There’s nothing in the actual room, but another doorway on the opposite end will lead to a chest (Bright Stone). Descend the stairs in front of the room you entered before, looting the chest to the right (Energizing Pomegranate M).

At the bottom, continue west, ignoring the first room and entering the second for another chest (Fire Soulstone M). Bypass the stairs and enter the first of two rooms to the west of them for a purple chest, which contains a Sturdy Quartz Rod. Climb the stairs you passed earlier and enter the room at the top of them for a chest with an Inspiriting Plum Basket, then a save point and the boss will be to the west.

Undergoing a grotesque transformation, Yvon will be accompanied by two Research Fellows. Yvon is strong and coming straight off of Chapter 2, his attacks will deal quite a bit of damage, so you will want to make sure your equipment is updated. If you manage to sneak your way to a Chapter 4 town, you might find some extra goodies that could prove useful in Chapter 3, but they aren’t necessary. Although his weaknesses aren’t blocked, you will still want to get rid of the Research Fellows as quickly as possible, since their added damage won’t make things any easier.

The Research Fellows have Tornado, which hits all characters for medium wind damage, as well as Whirlwind Slash. This attack can hit a single character up to four times, for medium damage, and could even KO those without a lot of HP. They are weak to spears, axes, lightning and dark, only have four shields and around 12,000 or so HP. Scholars and Warriors can make quick work of their shields with multi-hit attacks (Lightning Blast and Thousand Spears, although the latter is random). With them out of the way, you can begin concentrating on Yvon.

As already mentioned, Yvon’s attacks are very strong and Physical Augmentation increases both his physical attack and defense. If you have a Thief in your party, then use Shackle Foe to cancel the attack buff portion; in fact, you should always have Shackle Foe on Yvon to reduce the damage you receive. Other things you will see in the beginning stages of the battle are Intimidate, which can do some major damage to a single character and also inflict Silence, as well as Thrash, dealing major damage to the entire party. 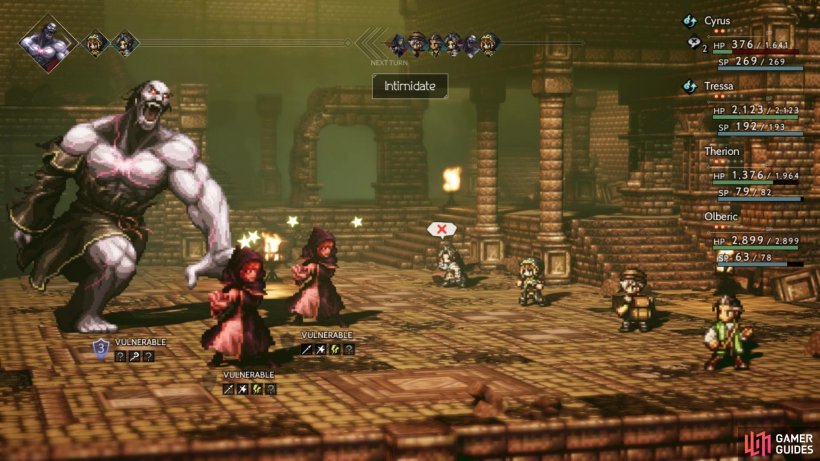 (1 of 2) Intimidate can silence a character, which is bad if it’s your Cleric 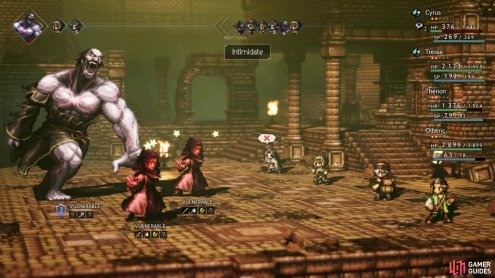 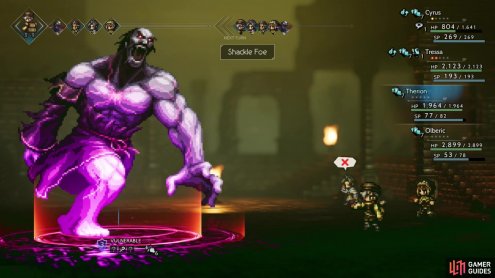 Intimidate can silence a character, which is bad if it’s your Cleric (left), Shackle Foe is definitely something you want to use on this boss (right)

Yvon starts out with three shields and upon recovering from a break, he will increase his shields up to three times, going from three to five, then from five to eight and lastly, from eight to twelve. He is initially weak to daggers, staves and light, then whenever he recovers from his first break, he’ll become susceptible to fire. This happens once more with the second break, as he’ll gain another weakness, this time to ice. Those will remain his weaknesses to the end of the fight, so he can actually become easier to break.

Upon reaching half health, Yvon will waste a turn by mentioning he is losing control of his body, which is the point where he’ll add two more attacks to his arsenal. Pulverize is a single-target physical attack that hits hard, but what’s special about this one is that it can remove your BP, too. Shatter Soul is similar, but instead of BP, it can drain your SP. Once you get rid of the Research Fellows, Yvon can become a bit more manageable and possibly even easier, as he only gets a single action per turn and he will waste some of those recovering from a break or “losing control of his body.”

As said earlier, reducing his physical attack is key, especially if you see him using Physical Augmentation. Combine that with the Mercenaries from Hired Help, you should reduce Yvon’s damage some. If your damage output is fairly good, you should be able to go through the phases of this boss without him actually doing any of the stronger moves.

Whatever you do, Yvon will eventually go down and some scenes will play out. You’ll get a lead on your next destination, which is Duskbarrow in the Woodlands. When you regain control, simply step towards the town exit to finish Cyrus’ third chapter.