You’re going to need to find Isaias Sandoval, an associate and aid of William Taggart. He is apparently hiding in the sewers.

o Get inside Sandoval’s Apartment [750 XP]

o Meet Malik on the roof of my apartment building

In any case, to find Sandoval you’ll need to head to Chiron Building (Jensen’s apartment building) and climb the fire escape in the nearby alley - check your quest marker for the specifics. Inside this building, head through the door on your right and sneak downstairs. 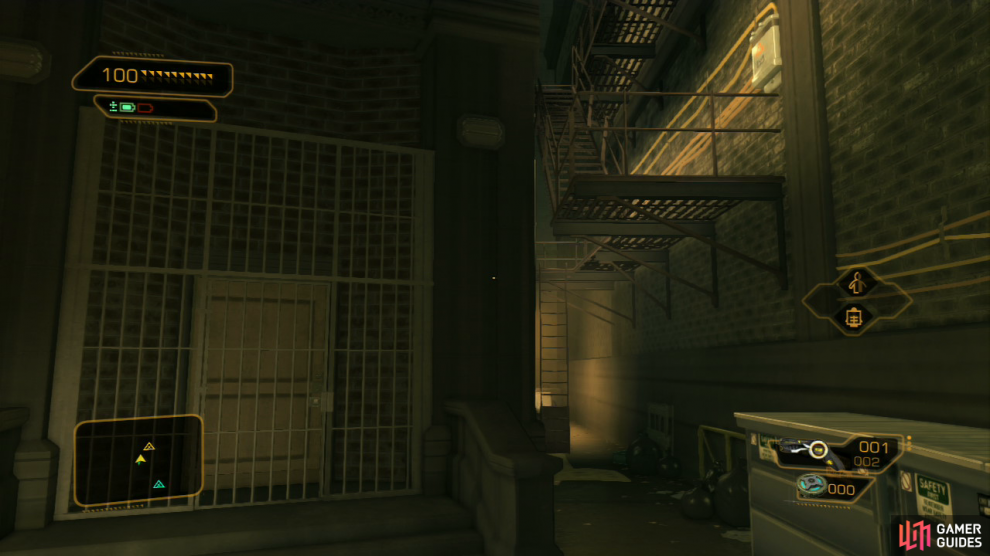 The thugs here are hostile so you’ll want to take them out. You can let them go downstairs first, though.

If you take the time to explore the apartment around the corner, don’t pick up the [PRAXIS KIT] immediately or you’ll trigger a trap of two [EMP GRENADES] underneath the body. Hide behind the door and take out none other than Zeke Sanders. Take him out as he comes investigating. He holds a [POCKET SECRETARY] with a keycode to a safe.

The next room contains the LVL4 safe behind the picture frame; code 5463. It contains [210 CREDITS] and [78 CREDITS], [4x TRANQUILIZER DARTS], [2x FRAG MINES], and [2x STUN GUN DARTS]. Head inside the bathroom and move the crates away from the wall to reveal a breaker box. Flip it and a secret basement entrance is revealed. (Alternatively you can destroy the breakable wall in this bathroom, which leads to the same place).

There are two guards downstairs which you can avoid by entering through a vent nearby the two green barrels; simply hop onto them and enter the vent. Silently drop down the shaft, one level at a time. Taking the two guards out isn’t necessary but if you wish to do so, activate cloak and perform takedowns on them. The weapon cabinets here contain [2x COMBAT RIFLE], [SHOTGUN], and [3x REVOLVER]. If you need the cash you could always pick up one at a time and sell them to a dealer. 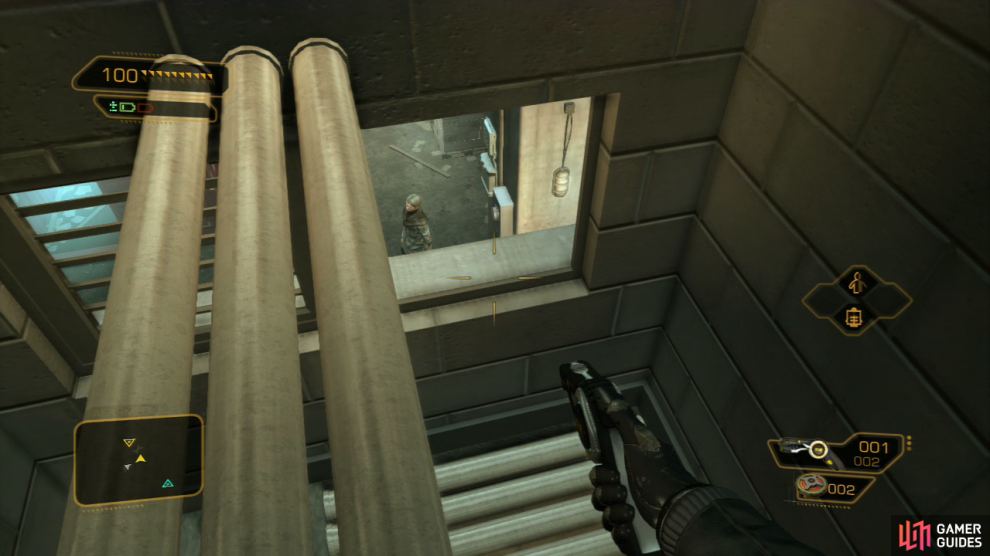 In any case, the lockers contain [15 SNIPER RIFLE AMMO],[4x SHOTGUN CARTRIDGES], [5x SHOTGUN SHELLS], and [20x COMBAT RIFLE AMMO]. Enter the sewers via the manhole in the red container.

The place is crawling with Purity First members, so stay on your toes. The first guard is taken out fairly easily since he’s not close to any other guards. Take him out when he passes by - hiding behind the barrels works well.

There’s a laser grid to your left, and more guards on the right. Enter through the vent nearby the green barrel to reach a small room [TRAVELER 100XP]. From here you can easily take out a guard in the next hallway. The LVL 4 security panel here (8218) disables the laser grids. Do beware of the four [FRAG MINES] placed on the overpasses. There’s a breakable wall on the southwest that grants you [EXPLORER 200XP] and a [CYBERBOOST PROENERGY BAR] can be found here (to make up for the energy cell usage).

As for the three guards at the burning barrel, it’s possible to sneak up on the two standing close to each other and perform a double takedown. The third one won’t notice, allowing you to take him down as well. There are [6x SHOTGUN CARTRIDGES] lying on top of the barrels. That’s essentially everything there is to this area, so head to the door around the corner and confront Sandoval. Empathizing with him is an excellent way to win the social battle. [1000X], [GHOST 500XP], [SMOOTH OPERATOR 250XP], [SILVER TONGUE 1000XP]. Take his [REVOLVER] and search the room for [5x REVOLVER AMMO]. There’s also a [HUGH DARROW EBOOK] on his desk.

Go through the other door to reach another part of the sewers. There’s a breakable wall on your right hand behind which you can find [28 CREDITS] and [300 CREDITS]. The ladder leads to a closed door with a LVL 1 security system that links to the main sewer system. From here head to Chiron Building and meet Malik at the roof [750XP]. 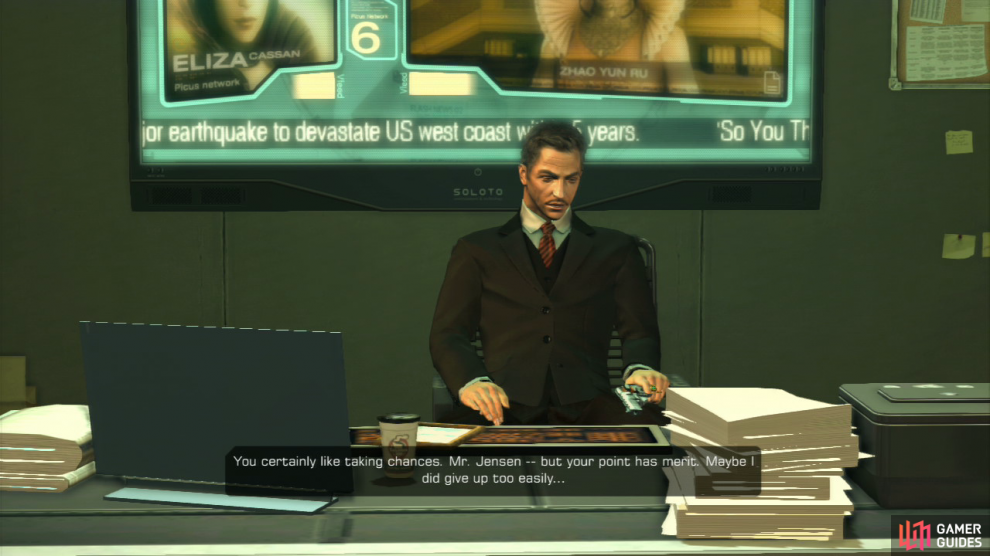 This guide will skip the two available sidequests for now and include them in a later update. Do these yourself if you want to, because continuing with the game cancels them - forever.