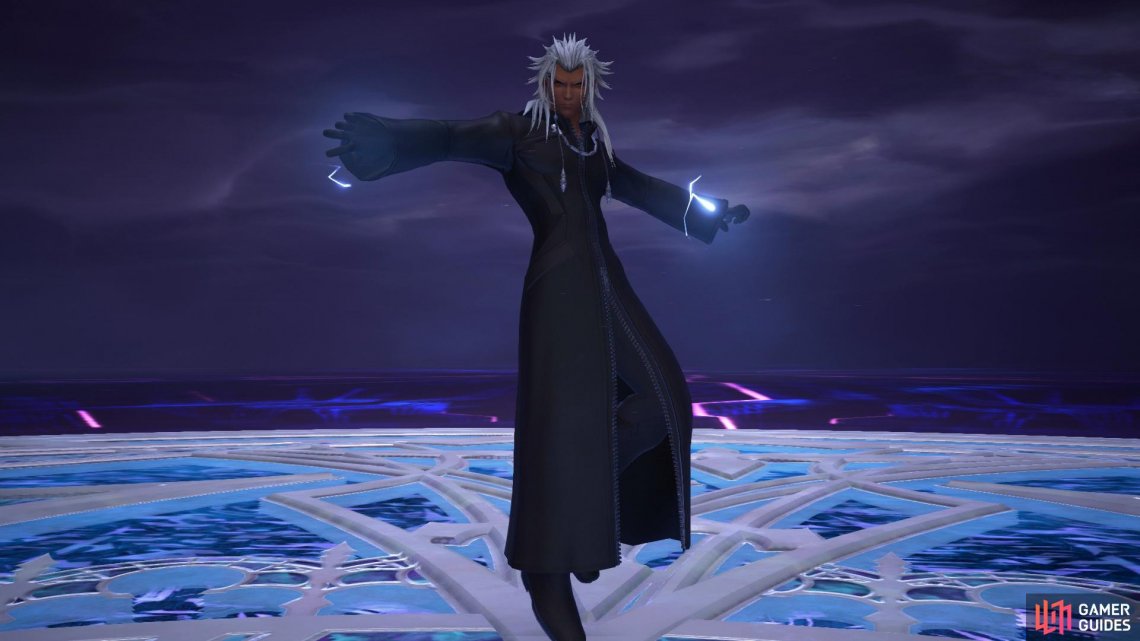 Did you know? Where Ansem is the Heartless of Ansem the Wise, Xemnas is the Nobody. He’s the leader of the original Organization XIII and has gone up against Sora in Kingdom Hearts II and Kingdom Hearts: Dream Drop Distance.

Xemnas, like Ansem, is one of the tougher initial Limitcut battles and you’ll need to take the time to learn all of his attacks if you wish to have any chance of beating him. If you can’t reliably block his attacks, you’ll find it difficult to find an opening to attack him, what’s worse, he has one of the more difficult Desperation Moves in the game.

Xemnas’s standard combo will see him teleport around the arena as he unleashes kicks and punches, it can be hard to keep up with him so be sure to stay locked-on. These can all be deflected and should you block them all, you can counter with a combo of your own. At times throughout the battle, Xemans will send out Black Thorns, these will do no damage but cannot be deflected and should you be struck by them, you’ll be pulled around the arena opening you up to Xemnas’s follow up combos. For this reason, focus on evading when you see the Black Thorns, should you be caught in them, focus on Air Dashing to get away from Xemnas. 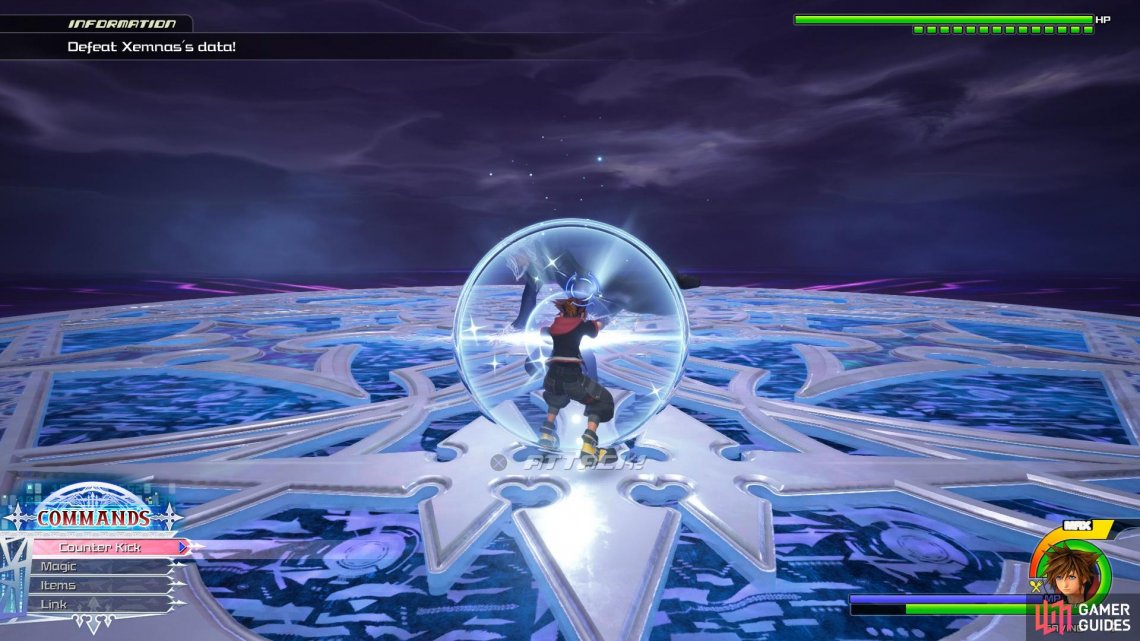 Xemnas will often send out large Electrical Orbs during this, these will home in on Sora and explode but they can be deflected so focus on standing your ground and guarding through these. Also keep an eye for when Xemnas creates Barriers around the arena, these can and shoule be taken out with a single strike as should you leave them, he’ll use Black Thorns to pull you into them, damaging you in the process. If you’re quick here, you can actually take down the Barriers and score a free combo on Xemnas provided you’re close enough.

Xemnas’s other attacks are his Blade Combo, he’ll swing several times at you before ending it with a Spinning Slash upwards, these can all be blocked and if you should block the Spinning Slash, you can counter safely here. Finally, Xemnas will send out small Red Orbs, these will wait a little and then start shooting projectiles at you, this is better to guard through rather than dodging. Your best methods of attacking Xemnas here is via countering his combos, the biggest issue is the fact that Xemnas will drag the battle into the air, making it tougher to block and dodge against him.

Xemnas becomes his most difficult during his Desperation Move, which is arguably one of the tougher ones to deal with in the game. He’ll transform the arena of darkness before using his Black Thorns to try and pull you around and combo you. Forget about looking for openings here and focus on dodging and blocking his attacks as it’s incredibly easy to have your HP cut short in a matter of moments. Once the initial onslaught is over, Xemnas will teleport away before summoning countless Red Orbs, stay on the ground and wait for them to start moving and block, you can block through all of these before Xemnas resumes his onslaught. After a period of time, Xemans will repeat the Red Orb attack but you’ll have to deal with two waves and the addition of a Blue Orb. This Blue Orb can’t be deflected so as soon as you see the blue glow, dodge to the side before putting your guard up again. This will signify the end of his Desperation Move but should you be struck, you’ll be reduced to 1HP and stunned, usually resulting in defeat. 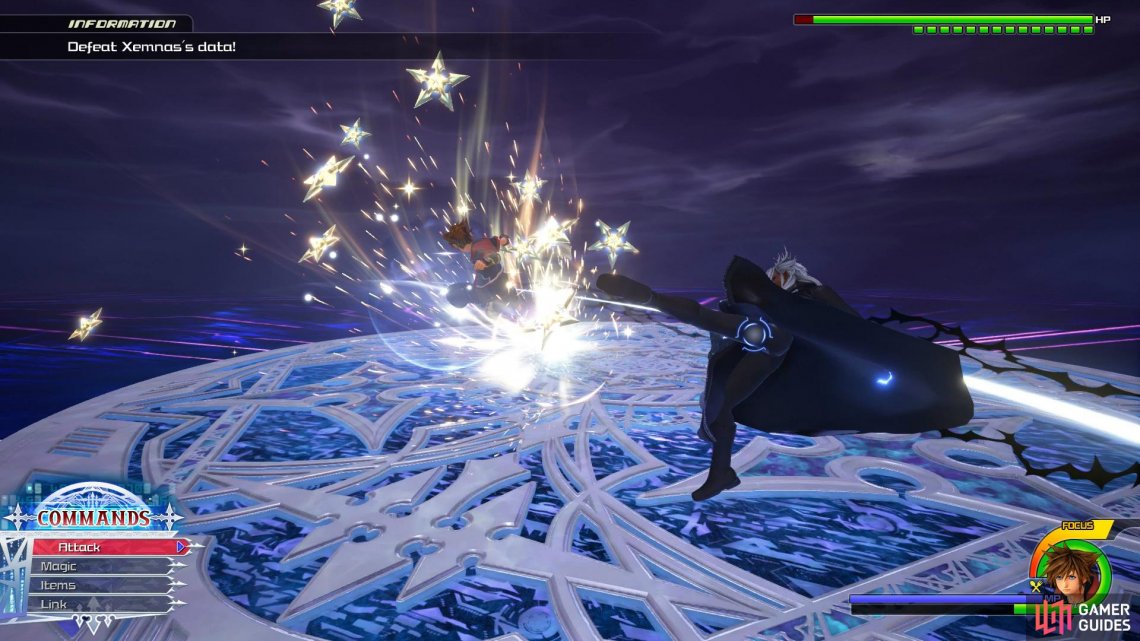 (1 of 7) Xemnas can be countered after deflecting his combos

Xemnas is incredibly tough, you’ll have to learn how to guard against all his attacks so you can comfortably attack him when he’s not in his Desperation Move. His Black Thorns are the toughest obstacle to master as he can send them out at any time, altering your position in the arena. His Desperation Move is a prime candidate for the Link method should you not master the timing on blocking the attack.