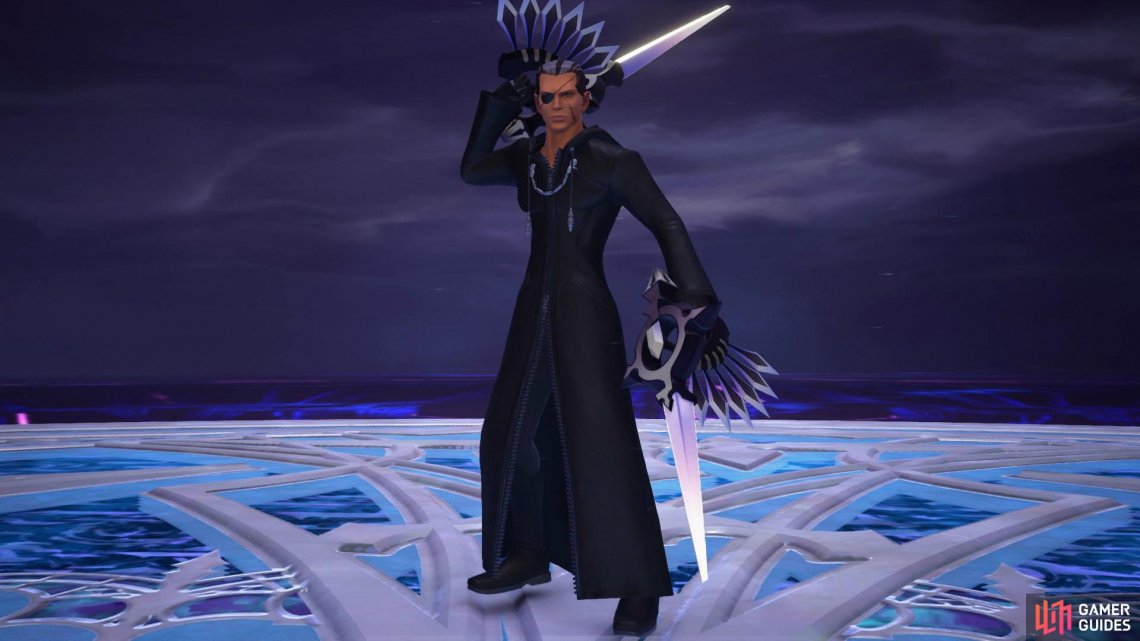 Xigbar is one of the more important characters in the Kingdom Hearts storyline. Although seemingly an Organization XIII grunt, the ending of Kingdom Hearts III revealed him to play a much larger role as one of the Lost Masters, Luxu. Expect to see much more of Xigbar in the series as their role becomes more clear.

For those of you who fought the Data Battle of Xigbar in Kingdom Hearts II Final Mix, you might know what to expect here. Xigbar is all about range and knowing how to deflect properly is essential for victory. The first phase begins with the two of you on opposite sides of the arena while the center is completely off limits. You can travel around the outer edge to attempt to get to him but it’s unwise as Xigbar will just move away.

Instead, focus on dealing with Xigbars Arrow Barrages that he shoots from distance. These can all be deflected back at him for some minor damage until the arena shifts. His normal Red Arrows are as you’d expect, a straight line Barrage that can be deflected right back at him, you’ll have to pause a little and wait for them to arrive before blocking. This is usually followed up by his Pulse Arrows, he’ll shoot out Red Arrows that will stick around before homing in on Sora at once, don’t get baited into blocking straight away and then block as they start moving. 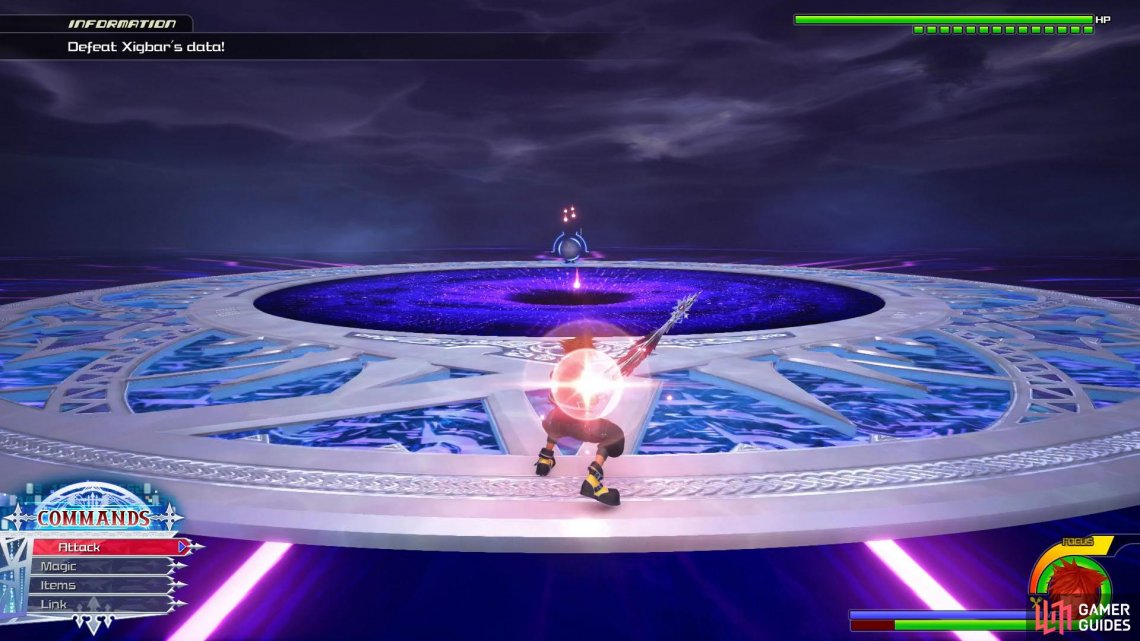 His final shot is a lot more trickier to deal with, he’ll shoot out a large ricocheting Blue Arrow that will travel towards Sora, this can be deflected although it will then eventually travel back two further times. To make matters worse, Xigbar will teleport over to Sora and shoot down regular Red Arrows so be sure to keep your guard up. His final attack before he transforms the arena is to use his Arrow Swarm, this is easily avoided by sticking to the edge of the arena and deflecting the follow up Red Arrows.

At this point, the arena will transform and you’ll be able to get close to Xigbar but beware as he’ll still have access to all his previous attacks. Try to stay locked-on here and when an opening approaches, Air Step over using a Shotlock to begin a Keyblade Combo of your own. Deal enough damage to Xigbar and keep an eye on the Situation Commands, eventually you’ll see the Showdown command. This is your western style Dual and you’ll need to wait for the moment for Xigbar to move and then press the [X]/[A] button to dodge at the last minute and land a blow of your own, it’s often easier to way for the command to appear on the screen to get the timining right. If you land the hit, you’ll be free to follow up with some Keyblade combos and really deal some major damage to Xigbar, fail however and you’ll take hefty damage yourself.

Xigbar will return to the first phase after an extended period of time where you’ll find yourself cut off from the center. This plays out exactly the same as that phase so work on deflecting the arrows once more to force him to change the arena once more. Xigbar is at his most dangerous during his Desperation Move, during this the arena will be limited to just a small circle as he darts around leaving a barrage of arrows all around him. The best way to attempt to avoid this is by running around the edge of the arena using dodge rolls constantly to dodge in and out of his attacks. Xigbar is completely invulnerable during this so focus purely on survival. 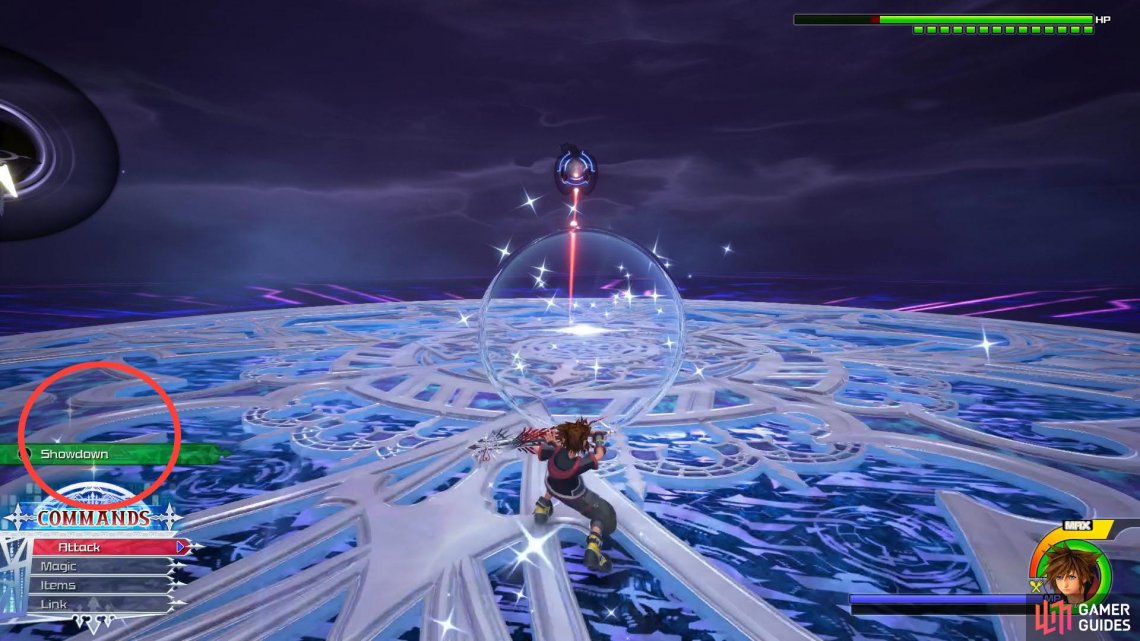 (1 of 2) Look for the Showdown Command in phase two 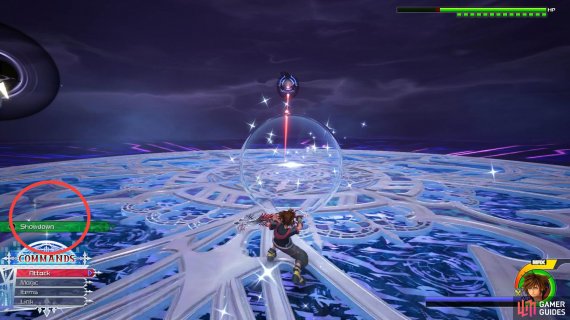 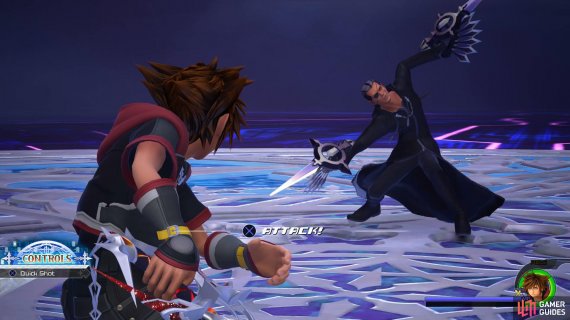 Look for the Showdown Command in phase two (left), and strike him with the right timing to open him up to some Keyblade Combos. (right)

Once this is over, you’ll return to second phase and the battle will play out as before. The main trick to defeating Xigbar is knowing when to deflect his attacks and making full use of winning the Showdown, giving you ample time to pile on the damage. This is a battle that will force you to learn how to deflect efficiently if you haven’t already learnt it.

If you’re really struggling, you can abuse Links (especially King’s Flare) to bypass all of the boss’ Desperation Move. You’re invulnerable during this state so you can skip most of the attacks.