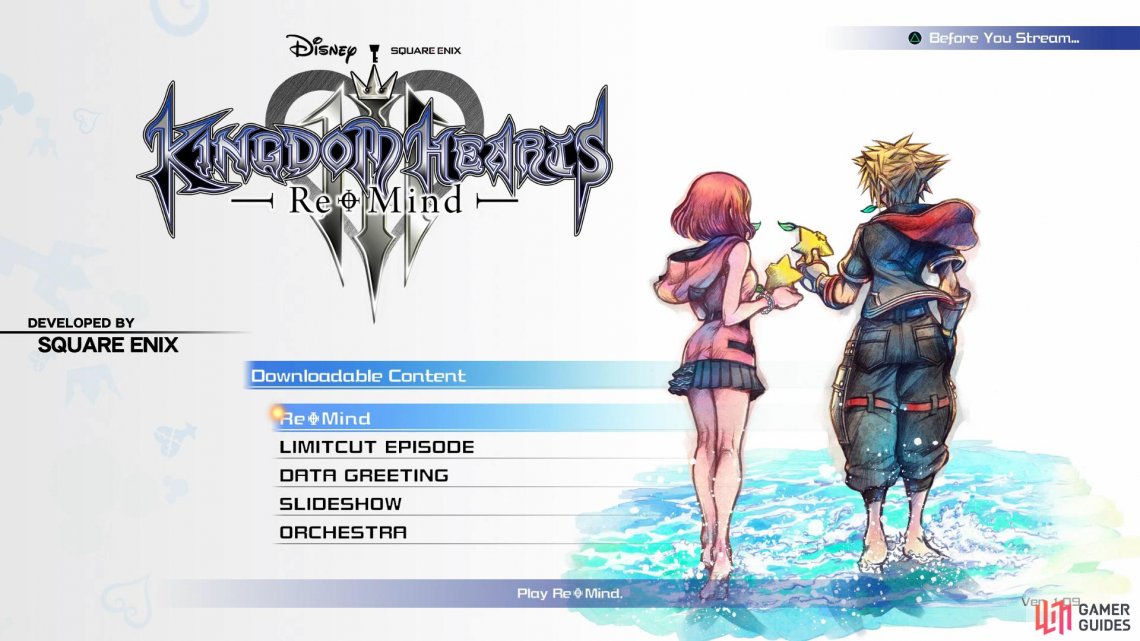 Re Mind is the DLC expansion to Kingdom Hearts III similar in nature to the Final Mix versions of the Kingdom Hearts, Kingdom Hearts II and Kingdom Hearts: Birth By Sleep. As such, you’ll need to purchase it in either two versions, with the deluxe version containing the footage from the KINGDOM HEARTS – World of Tres – Orchestra concert. Once you have the new content, you’ll require a Clear Save File on any difficulty level and the status of your current Sora will carry over, items, Keyblades and all included.

Warning: This save file will be the basis for all of the DLC for that particular playthrough including Limitcut which features extremely difficult bosses.

Warning: Likewise, when you begin Re Mind, save on a different slot if you wish to restart the Re Mind campaign from the start as you won’t be able to on that save file if you save over it.

Re Mind takes a look at the events of the finale of Kingdom Hearts III from several different perspectives. As such, the current status of your Sora will determine how difficult it will be and how quick you may progress through it. It’s strongly advised to take up the opportunity to play as the other characters when given the choice, it’s the only time in Kingdom Hearts III (save for one or two battles) that you’ll have the chance and it’s a unique experience well worth taking.

Do take into account however that if your Sora has Ultima Weapon along with a high level, you’ll still find it easy going when controlling the other characters where Sora is present.

Depending on your difficulty (Beginner requires no preparation), you may want to ensure that Sora is at least Level 50 with at least one maxed out Keyblade to give Re Mind a fair challenge. Anything above this and you’ll find it considerably easier with a Sora using Ultima Weapon and Level 99 on Standard and Proud completely trivializing the content.

Note: If you’re struggling in Re Mind, you can reload your current DLC save back into the non DLC content by pressing the [SQUARE]/[X] button on the Load screen.

Yes, Re Mind comes with a new Trophy list and one of them is unlocked by beating the Re Mind campaign. It’s a fairly difficult Trophy list to complete and only the real dedicated will fully complete it.