The Orange Flan can be found in the Kingdom of Corona, not too far from Rapunzel’s Tower. In fact, teleport to that save point, then take the tunnel out into the forest, where you should see the Orange Flan right there in the open. This mini-game is a bit different than the others, as you have to take pictures of flan around the area. Each flan is worth a specific amount of points, and your goal is to reach at least 23,000 points to get the high score. However, the problem is that you only have seven photos you can take, which means you’ll need to be a bit picky with the flans you capture on photo. It’s important to note that when taking the pictures, you want to see Excellent pop up, as this is worth the most points.

Note: More than seven flans will be listed in the following walkthrough of this mini-game, as some of the pictures can be a bit finicky to get the Excellent.

Note: All point values in parentheses are the values for that particular picture at Excellent value, and not the overall total.

From where you start, look by the entrance of the path leading to Rapunzel’s Tower, where there should be a small orange sticking out of the ground. Wait for it to pop out of the ground and stop moving before snapping the photo (4,000 points). Directly southwest of where you start is a cliff that you should be able to see the upper ledge. Approach this cliffside, then back off towards the starting point while keeping an eye on it. Eventually, a flan will appear on the ledge, followed by four more. Wait about a second or so after all five appear to snap the photo (7,200 points).

Head west-northwest from there, until you see a flan off in the distance floating up in the air. That’s not the one you want, as there are two flans on a tree branch just before it. Wait until they start jumping down before you pull out your camera, as when they do hit the ground, they will merge into a dessert. You only have a few seconds to snap a picture of the dessert before they disappear for good (5,000 points). Turn your attention to the floating flan behind the rocks and wait until it just hits its peak before snapping a photo (2700 points). South of that will be an orange in the water, so wait until it pops out and strikes a pose before snapping the photo (2700 points). 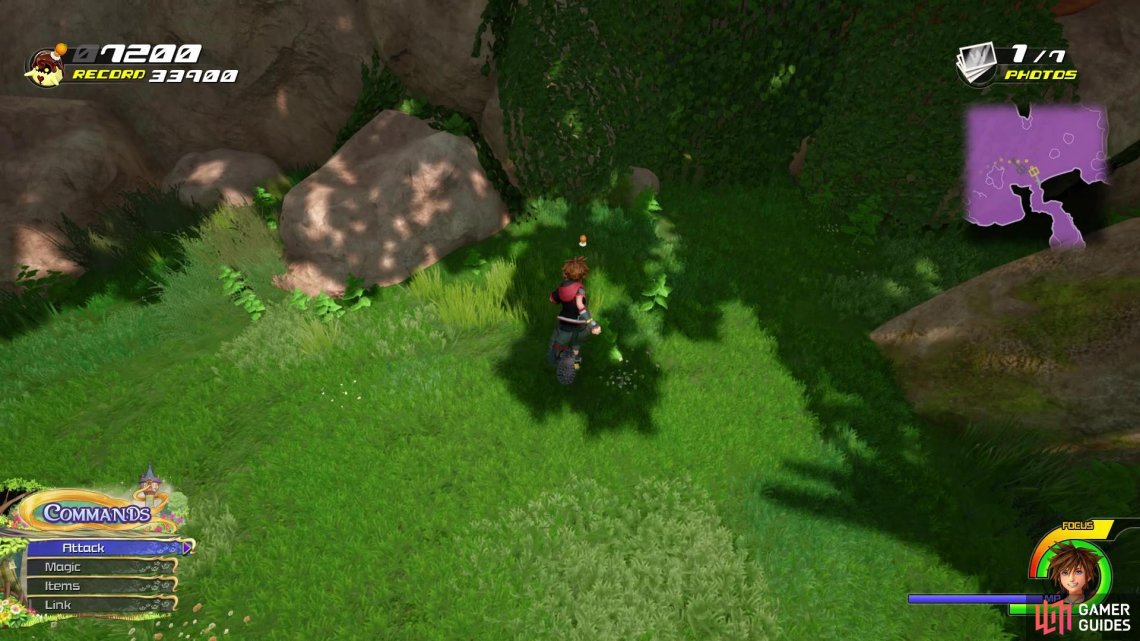 Continue north, bypassing the wandering flan, until you spot some huddled up in the little clearing. They will walk forward to strike a pose, but you want to wait until they do this the third time, as that will be when all five will be posing. Snap the photo at the third time they do this (6,000 points). Return to the starting area and look for the cave to the east-southeast. As you approach the entrance, a smaller flan will pop out of the bushes and strike a pose, so feel free to take a photo if you want (3,000 points). Inside of the cave is a super tiny flan walking around the central pillar, so follow it until it poses to take another picture (3,300 points).

For the last very good flan, exit the cave and go straight north, following the trail to another clearing. Right at the entrance of this clearing is a flan playing with some animals (a rabbit and two birds). Wait until the rabbit is on its head and the birds on its hands, then take the photo when it stops moving (5,400 points).