This quest can be found north of Mount Helikon.

As you make your way to Megaris, dock your ship at the Port of Kreusis, located beneath Mount Helikon, and ride inland toward where Eppie, the quest giver, can be found surrounded by five wolves beside the road.

Take cover in the nearby bushes and take out as many of the wolves as possible with headshots before they can respond to the ambush. You will most likely be fighting at least two wolves in close combat after that, but this should not be a problem if you take care to dodge their attacks and respond with swift light strikes to take them out.

When all the wolves are dead, speak with Eppie who is lying wounded on the floor. Eppie will propose that you escort him to the Cave of the Oracle, where he is convinced that undiscovered ancient treasures await. Follow him inside the cave and then speak with him again. He will suggest that you explore the cave further while he observes what motivates the people worshipping inside the cave. 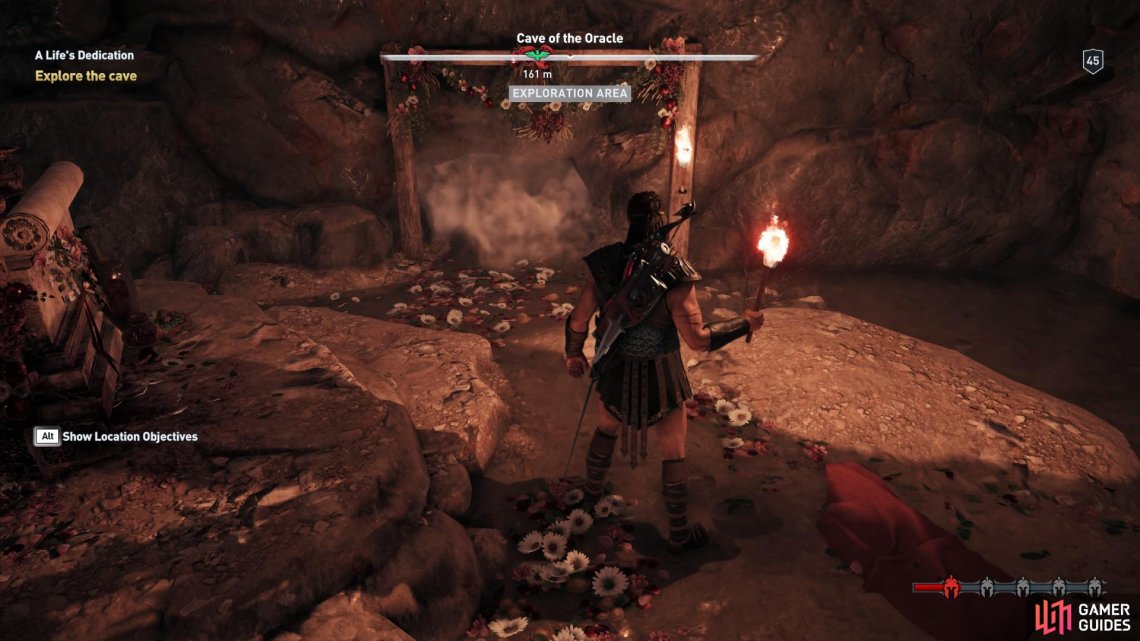 Approach the hole in the cave where the altar is positioned. You will automatically slide through it and be able to explore the cave.

Once you are in the depths of the cave, you will see an objective to loot three treasure items. Take a left turn to explore the first cavern, and be sure to loot any ore that is scattered around. As you move further east you will come across a large hole in the ground. Jump down into the water and continue to explore the tunnels within, looting as you go.

The path will eventually lead to an exit from the cave, but once you have looted all of the ore you can return up the shaft where you came from. You can now head west through the cave until you encounter a door. You can use the stele piece given to you by Eppie to open the door. Explore the rooms contained within and loot the treasure chests.

At the end of the tunnel you will find a large hole in the ground. Jump down into the room below, loot the treasure and interact with the search icons associated with the small warrior figurine on the floor, and the markings etched on the wall.

When you have thoroughly explored the room, move the storage containers to the north to find a way out of the room. Head back through the cave system the way you came in, and speak with Eppie in the first chamber. When you speak with him a brief cut scene will initiate, after which the quest will complete. See the ‘Language of the Ancients’ side quest to continue helping Eppie uncover the missing stele pieces.

Note: You will uncover numerous stele throughout the game world as you explore. Most of the stele will be encountered during main quest missions. Each stele is usually found within a tomb or cave. Once identified, you will receive an extra skill point along with any treasure that your local surroundings may yield.