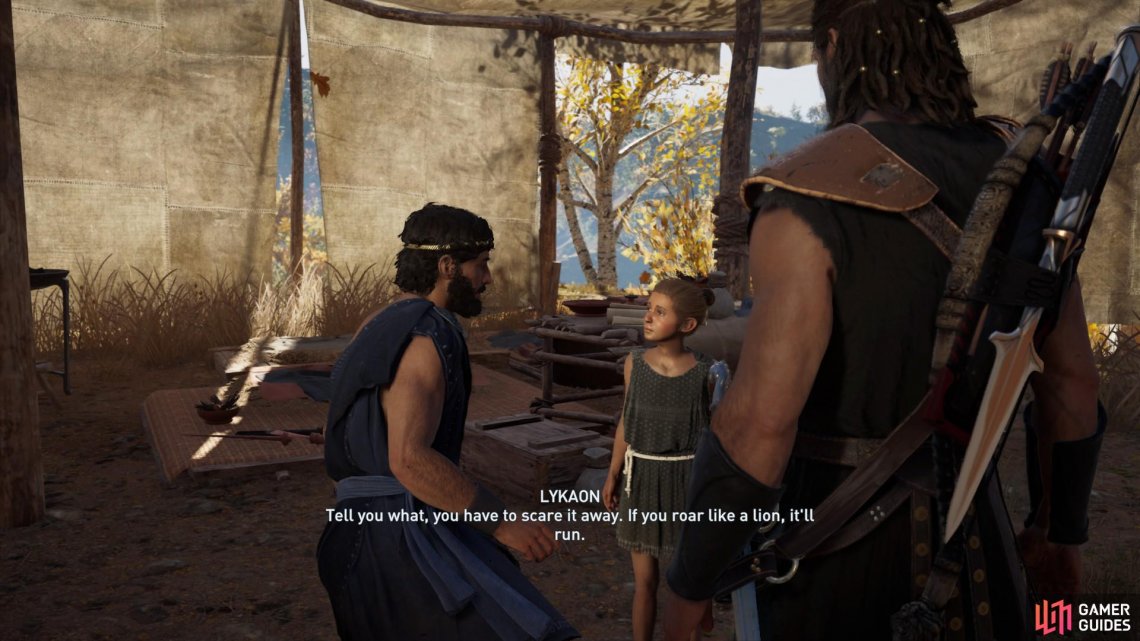 Lykaon is introduced to you as a kindly healer. You can establish a romance with him from your first choice of dialogue.

To begin this quest you should speak with Lykaon, a local healer based at the Chora of Delphi. As you approach him for the first time you will witness him helping a young girl with a rather basic ailment. When she is gone, you will have the option to initiate the conversation in a way which leads to a love interest developing between yourself and Lykaon.

However you begin the relation, it will be your task to gather some herbs for Lykaon to treat some of the local population. The herbs are located by a stream to the west of the settlement. As you approach the stream, you will note a number of wolves nearby. To avoid being overwhelmed kill as many of them as possible with headshots, and then move in to finish the rest off with melee attacks. When all the wolves are dead you will be able to pick the herbs, which can be found growing around the dense shrubbery. When you have all you need, return to Lykaon. 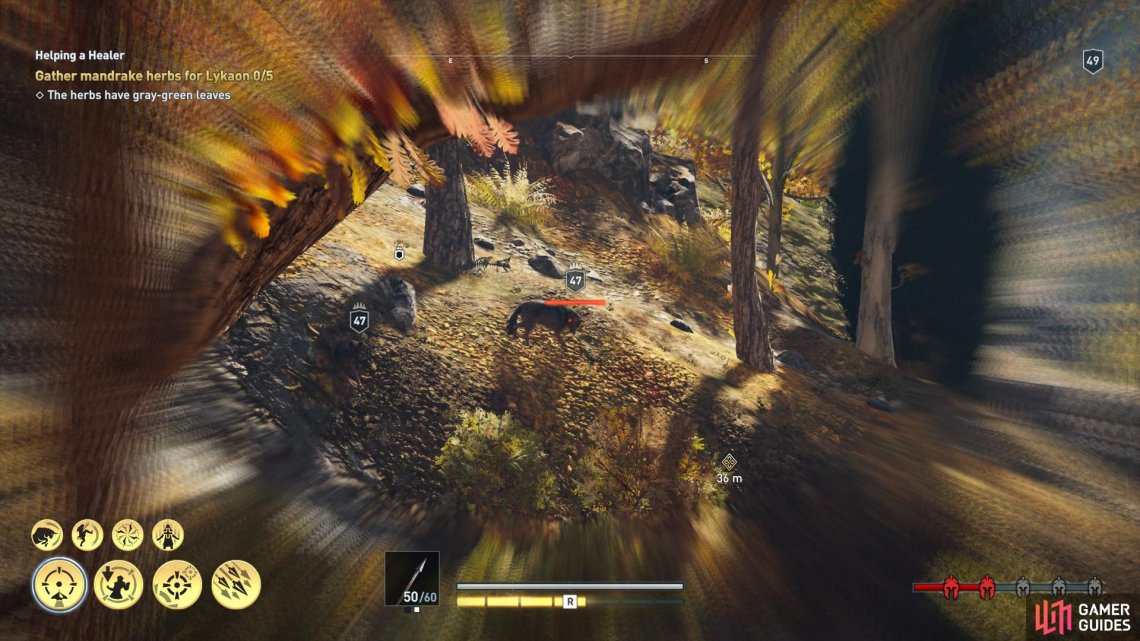 (1 of 2) Shoot as many of the wolves with headshots as possible before you approach them. More will spring from the bushes when you reach the stream. 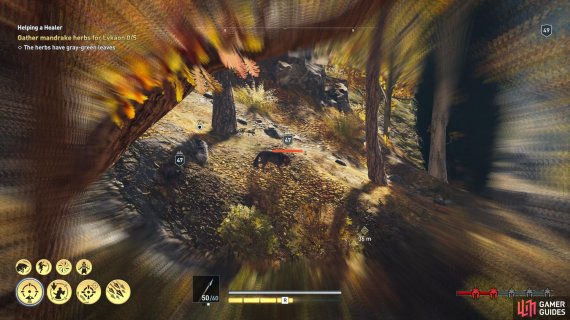 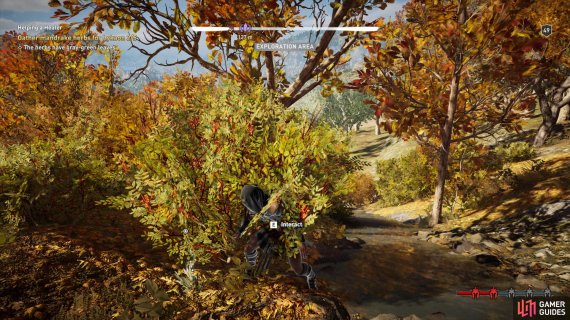 Shoot as many of the wolves with headshots as possible before you approach them. More will spring from the bushes when you reach the stream. (left), You will find the herbs growing beneath the dense foliage beside the stream. Follow it upstream to find more. (right)

Lykaon will then ask you to wait while he crushes the herbs into a medicinal form. You must now deliver it to three villagers. The first can be found nearby to the south. The other two can be found close together to the west. Be sure to avoid the House of the Pythia as you make your way west. The guards will not tolerate any trespassing. Speak with Lykaon to end this part of the quest.

Sins of the Past

When you have spoken with Lykaon another follow up quest will begin. You must now follow him to the house of his grandmother. When you arrive you will learn that she has been taken away by unidentified guards. Inspect the house to search for clues by examining the bracelet on the floor, the fire pit to the south west of the house, and by speaking with the civilian on the path to the north east of the house. When you have inspected all of the clues, speak with Lykaon again to proceed with the quest. 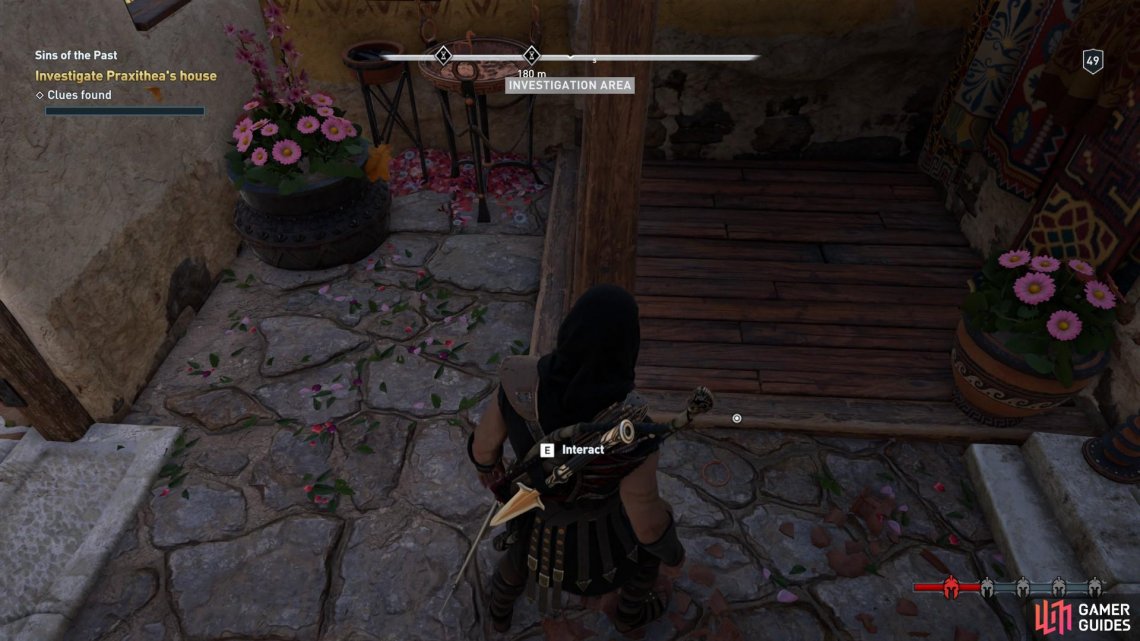 (1 of 3) Inspect the bracelet on the floor inside the house.

Now that you know where to find Lykaon’s grandmother, make your way north west to the bandit camp. As you approach the farm, use Ikaros to scout the location and identify any guards in the vicinity. The bandits will not be difficult to defeat. You can take most of them out with headshots and finish off any of those remaining with a few swift light attacks. You can then find Praxithea in a cage at the centre of the farm. Release her and escort her out of the farm. When you are far enough away from the farm you will be able to speak with her. Question her about the past. When you are done Lykaon will approach. You must now decide what is to be done with Praxithea. If you want the best outcome it is advised that you spare her life and pursue the romance with Lykaon.