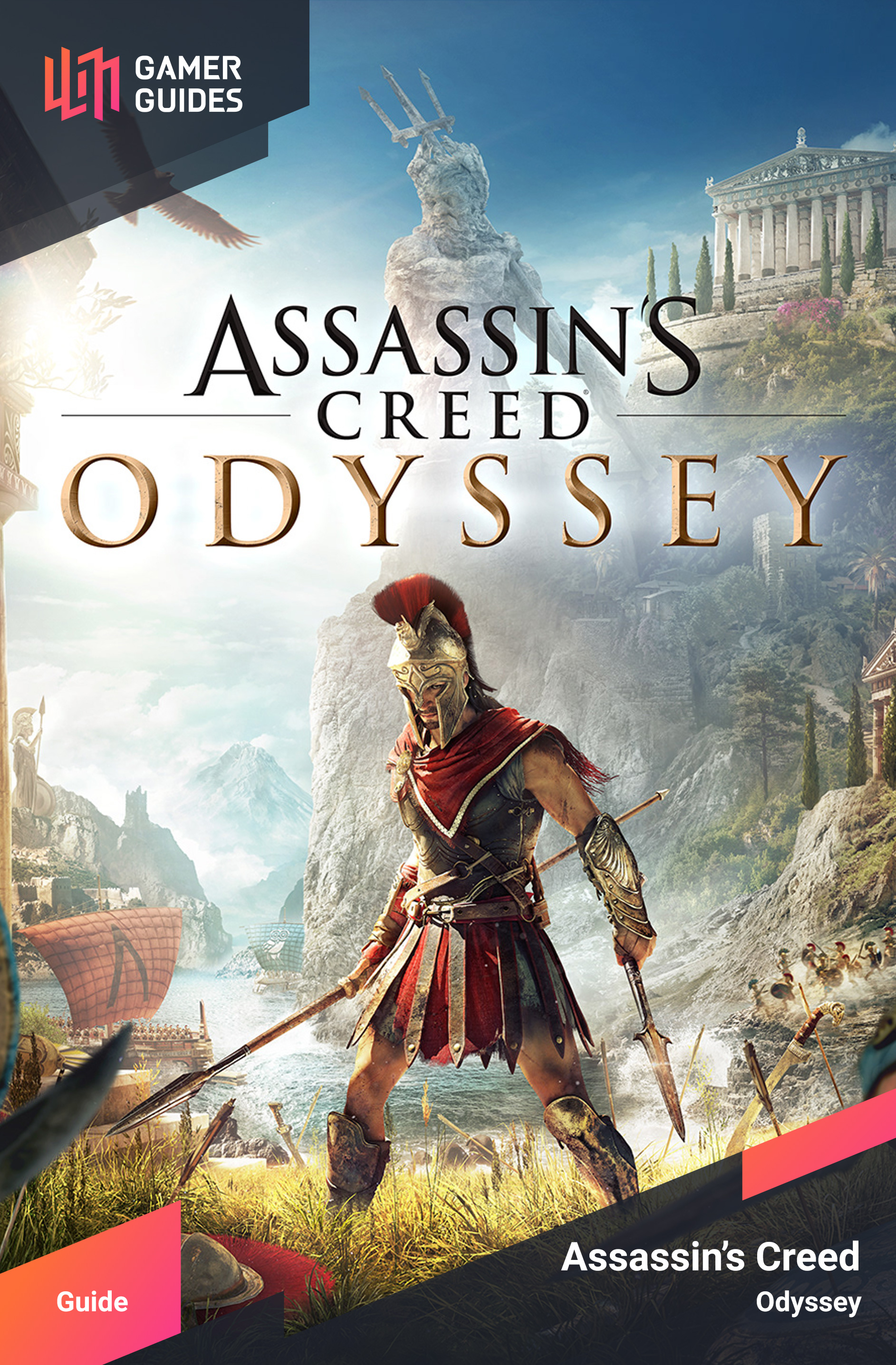 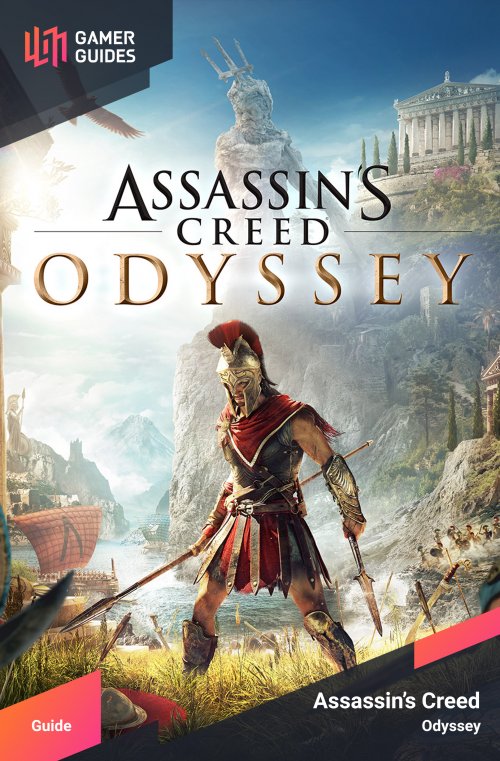 This quest has three support quests which should be completed before you aim to kill Misenos, the Athenian leader of Megaris. Since it is nearest to the bay, you should begin with 'The Athenian Treasure Trove'. The location of this quest also corresponds with one of the main locations for 'Crumble and Burn', allowing you to complete both quests within the same area more quickly.

The treasure trove of Megaris can be found in the Athenian Fort Geraneia to the west of the bay. As you move closer to the fort, use Ikaros to scout it for any potential opponents, and more specifically for the treasure trove itself. 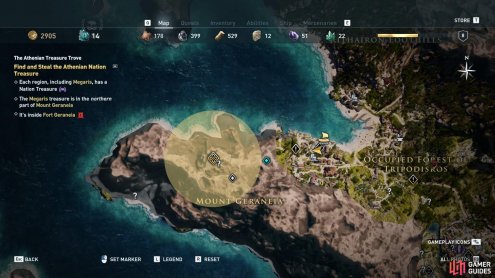 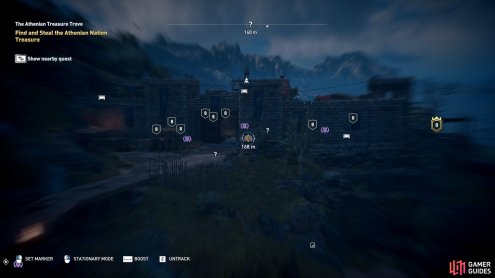 With the fort entirely scouted, you must now move in to steal the treasure trove. Assuming you want to kill as many Athenian soldiers as possible in order to maximise loot gain, you should begin by making your way to the main entrance gate.

Instead of running in head first to announce yourself, climb the fort wall to the left. When you get to the top you will see a chest to your left which you can loot as part of the location objective. Once you have done that, continue up the small grassy hill and turn right at the top. You will see a rope leading onto a high platform, where another chest associated with the location objective can be found. 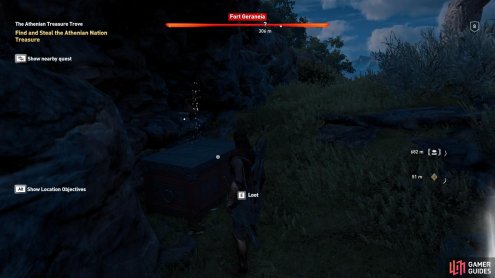 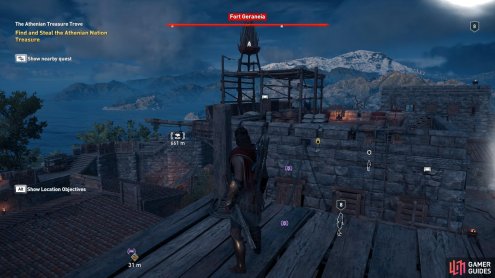 While you are atop the platform take the opportunity to shoot and kill the guards patrolling the north west and south west walls of the fort. Next, head east to the entranceway and jump down to assassinate the guard at the main gate. Climb the walls again and you will find a guard patrolling the northern wall. Assassinate him and continue along the fort walls heading west. 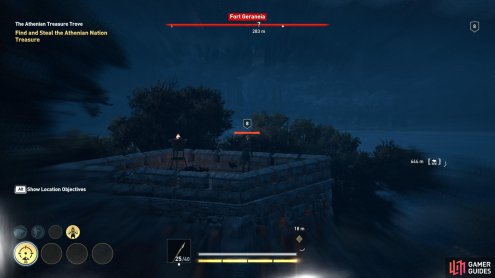 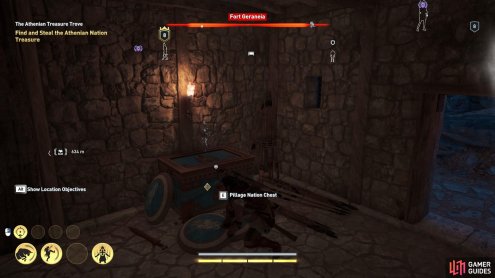 You can now focus on 'Crumble and Burn'. This is a simple one; find the war supplies throughout the fort by using Ikaros to scout it. You should already have most of them tagged from when you initially used Ikaros to locate the treasure trove, but it's worth doing one last check while you're inside the fort.

With all of them tagged, you can now get to burning them. You can burn the war supplies by finding a nearby brazier to light your arrow tips, or by using a torch while performing a basic attack. While most of the war supplies are easy to find, there is one that is located within a cave system, the entrance to which is located south east of the building where you found the treasure trove.

Note: The Location Objectives are not relevant to the main storyline, but if you want to complete them now you should continue assassinating the Athenian soliders, including the Captain and Polemarch, and looting the treasure chests.

With the treasure trove acquired and the war supplies burnt, you can focus on killing the remaining Athenian soldiers necessary for 'One Man Army'. If you have killed all of the soldiers within Fort Geraneia and the nearby cave that contained one of the war supplies, you should have 15/20 Athenian soldiers killed. The nearest place with the most amount of Athenian soldiers is Tripodiskos Farm, as shown below. There you should find at least four soldiers. If you are short of one more soldier after you have defeated those at the farm, you can head to Eirena Military Camp to the east, the precise location of which is also shown below. 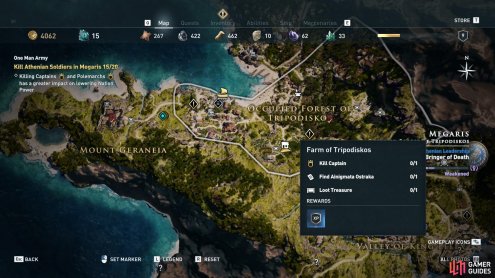 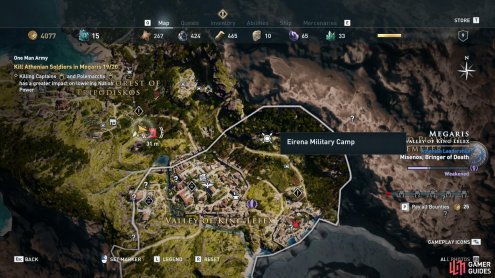 When you have completed all three support quests, you can find and kill the Athenian leader of Megaris. Note that this is a level ten quest, so if you are not yet there and are not feeling confident in your abilities you should level up by completing side quests first. The act of killing Misenos is not so difficult, but the subsequent quests may prove to be if you are not a suitable level. Once you feel you are ready, you will find Misenos in a tent outside the walls of Megaris, south east of the settlement. Approach him from behind and assassinate him. It should only take one attempt. Once he is dead, the quest will complete.