This side quest is acquired from Myrrine on Naxos, and is a useful prelude to ‘Home Sweet Home’ of Chapter 7. It involves meeting your real father, who can be found on the island of Thera, south west of Naxos. Board the Adrestia and sail south. On your way to Thera you can take advantage of the loot that can be found at both the Shipwreck of Dionysos and the Pirate and the Pirate Beach, both of which are located in the south west of Naxos. In addition you will find more loot at Kalantos Bay, which is located on the south east of the island. Here you should be cautious of the bandits that occupy the beach; they each posses fire weapons which are extremely deadly if you are hit multiple times at once. Use the surrounding foliage to facilitate as many assassination kills as you can manage before you meet the leader in open combat. When you have cleared these locations return to the Adrestia. If you are in need of hides you will find an easy source on the small island to the south east of Naxos, where a small settlement named Alektryon’s Rest is inhabited by murderous chickens. When you have completed the above local objectives, sail south to Thera. As you approach the island sail into the bay from the north west, and dock your ship at the port within. When you make landfall use Ikaros to scout the area and identify a chest. Make your way to it and open it to reveal a note. The note speaks of aligning mirrors in order to open the large triangular door below the chest. Look south east to find the beams of light reflected by movable mirrors. The first thing you need to do is destroy the wooden barricade which is blocking the beam from being channelled to the west. As you follow the light westward you will find it being blocked by the remains of a wooden door. Destroy the remnants of the wood to allow the light to shine north. Follow the beam until you reach a wooden tower which is blocking the light, and pull the tower to the east. You will then have to pull the remaining tower from south to north so that the light meets and reflects north east. The final part of the puzzle involves moving all of the towers away from the last beam of light so that it can reach the mirror through the hole in the floor, thereby reflecting to the large triangular door. You can then enter the door below the chest. 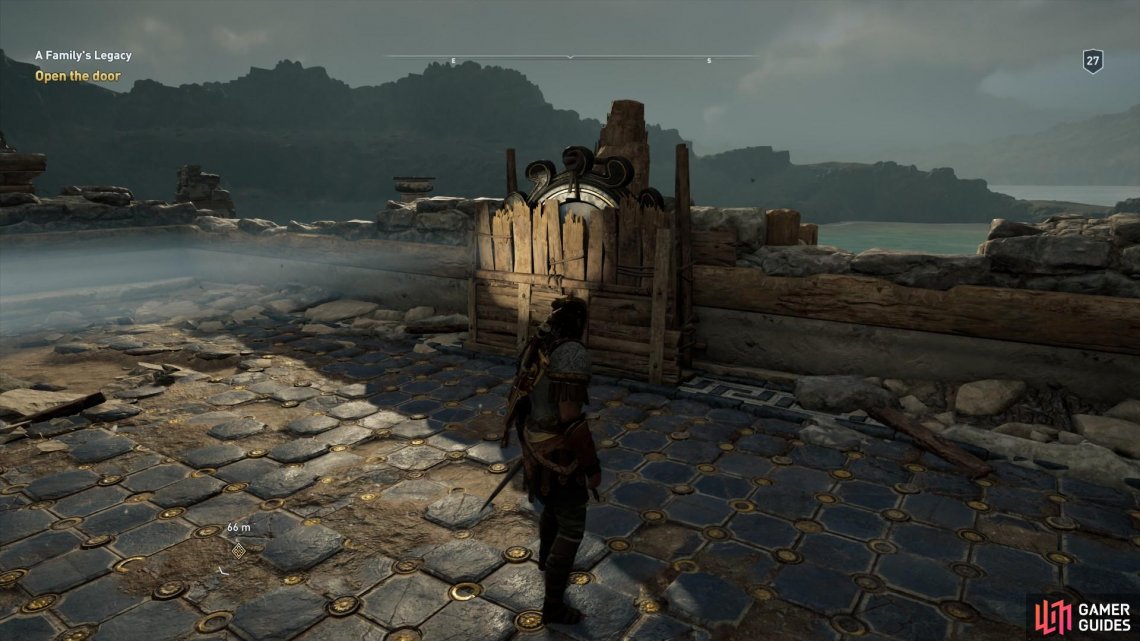 (1 of 4) Destroy the wooden barricade to reveal the first mirror.

When you enter through the door you will find yourself in a cave system. Jump down the hole into the pool within and then climb into the depths. Be sure to loot as much metal as possible as each node contains a reasonable amount of ore. As you follow the cave system through you will approach a room full of magma. Here you must be extremely careful not to fall in as you will die instantly. Make your way across by jumping from rock to rock. The quickest and easiest way is to jump on the rock surfaces to your left as you enter. You can then slide down another hole, at the bottom of which you will find an opening to another chamber. This time you should move from the right hand side and follow the rocks across. When you reach the other side you will find an opening leading to the Gateway to the Lost City. Dive into the pool below and run on ahead to meet your real father.

Note: Before you run toward the water where your father is waiting, look for a chest to your left. It contains a high quantity of precious metals.

When you have spoken with your father you will be transported back to the modern world. You must now dive into the ocean to find a way into the chamber. Head toward the quest marker and enter the underwater cave system. You can now swim through the way that you travelled back in Ancient Greece. When you each the end chamber, a brief cut scene will initiate, after which you will find yourself back in Ancient Greece. After questioning your father, walk back the way you came until you come across a circular portal on the ground. Use it to fast travel out of the chamber.