This quest begins on your new ship, the Adrestia. It is time to learn the ropes, and Barnabas has requested that you retrieve his shipment from some pirates in the nearby sea. Take command of the ship and sail to the quest marker which indicates the location of your target.

Note: As you approach the target you will notice that there are three pirate ships in the vicinity, one of which contains Barnabas’ shipment. You will have to defeat all three ships in order to obtain it safely.

The best way to enter the battle is to sail at such an angle alongside the ships so that you have a clear view of its side. You can then order your archers to fire at the ship, maximising damage. If you attempt to shoot at the ship with your archers head on, most of their arrows will miss. 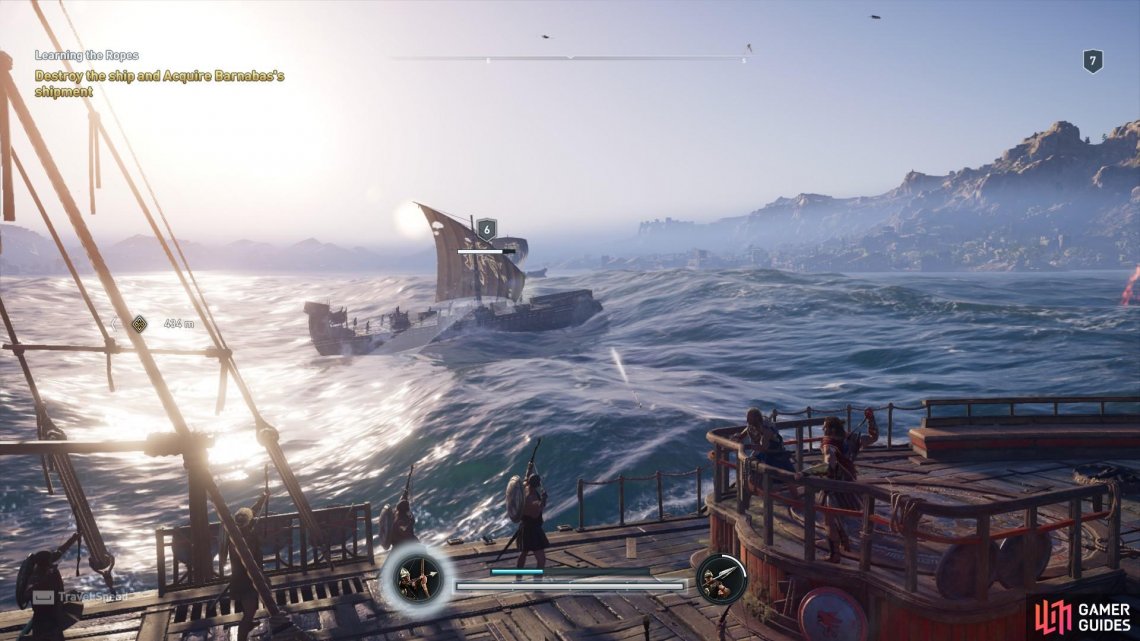 Sail around the enemy ship until you are positioned to its side. You can then loose arrows to inflict the most amount of damage.

You can continue shooting at the ships as you approach them from the side, or you can take the more direct approach of ramming the ships. Here again you will inflict the most damage if you ram them from the side. When you are close enough to the ship you will have the option of throwing javelins at the crew, further damaging the overall health of the ship and reducing the amount of damage its crew can inflict. To finish a ship off, ram it from the side so that it breaks in two. Destroying a ship in this way provides you with a health boost and allows you to automatically loot its resource content, such as olive wood and gold.

Note: Don’t forget to loot the remnant cargo of a ship when it is destroyed. The most common loot at this point will be olive wood. The quality of loot will depend on the size of the ship and whether it is primarily a war ship of Sparta or Athens, a pirate ship, or a merchant ship.

When all three of the ships are destroyed, a cut scene will follow and the quest will complete.