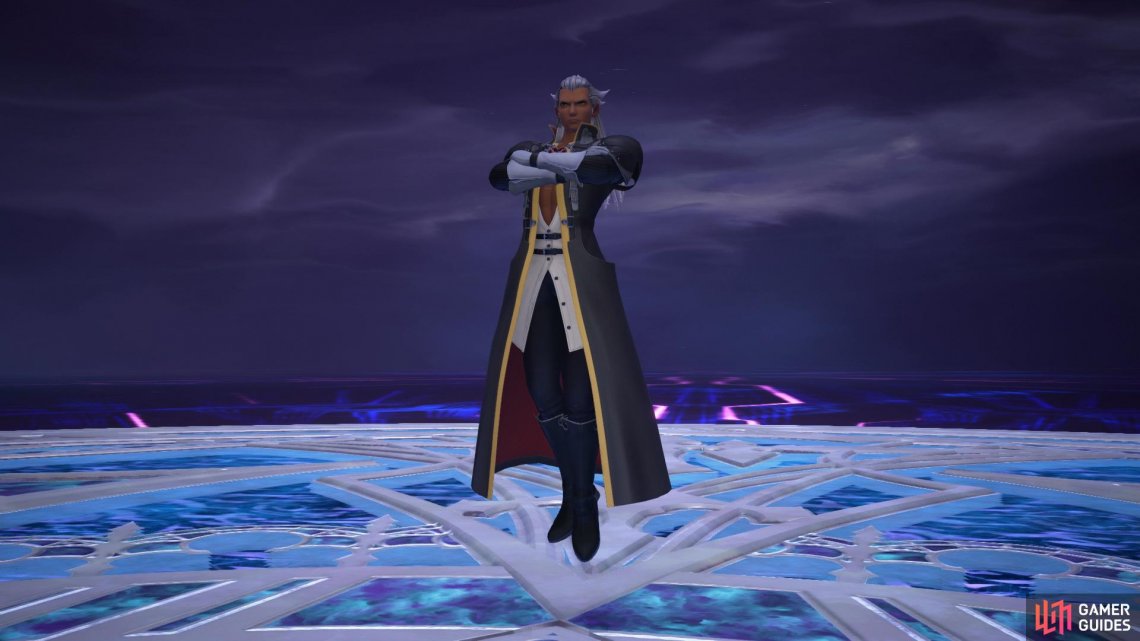 Did you know? Ansem was the original antagonist of the first Kingdom Hearts the game and is the heartless of Ansem the Wise, a researcher from Radiant Garden. He originally possessed Riku in Kingdom Hearts to seek out The Seven Princesses of Heart.

Ansem is far more technical than many of the other bosses available in Limitcut and you’ll really have to master making the most out of Air Step to deal damage to him effectively. Being a master of Darkness, all of Ansem’s attacks focus around Dark Orbs that attack in various ways.

His most common attack are his Dark Missiles attack, he’ll keep his distance and fire off barrages of Dark Missiles that will seek out Sora, stand your guard here and deflect the attacks and then follow up with a counter if you’re close enough. He can fire multiple barrages at once so be prepared to continue deflecting after the first. He’ll also use his Dark Mines that will seek Sora and explode on contact, these two should be deflected if you’re too close otherwise dodge out of the way.

One of his more trickier attacks are his Energy Balls that will surround you before firing out lasers, these can be dodged at the last moment or if you’re really confident, deflected. What makes this attack more troublesome is that he uses it alongside his other attacks. He can also turn these Energy Balls into a Energy Barrier for himself as he flies towards you, Ansem can’t be damaged through this so either keep your distance or stand and deflect through the entire attack. 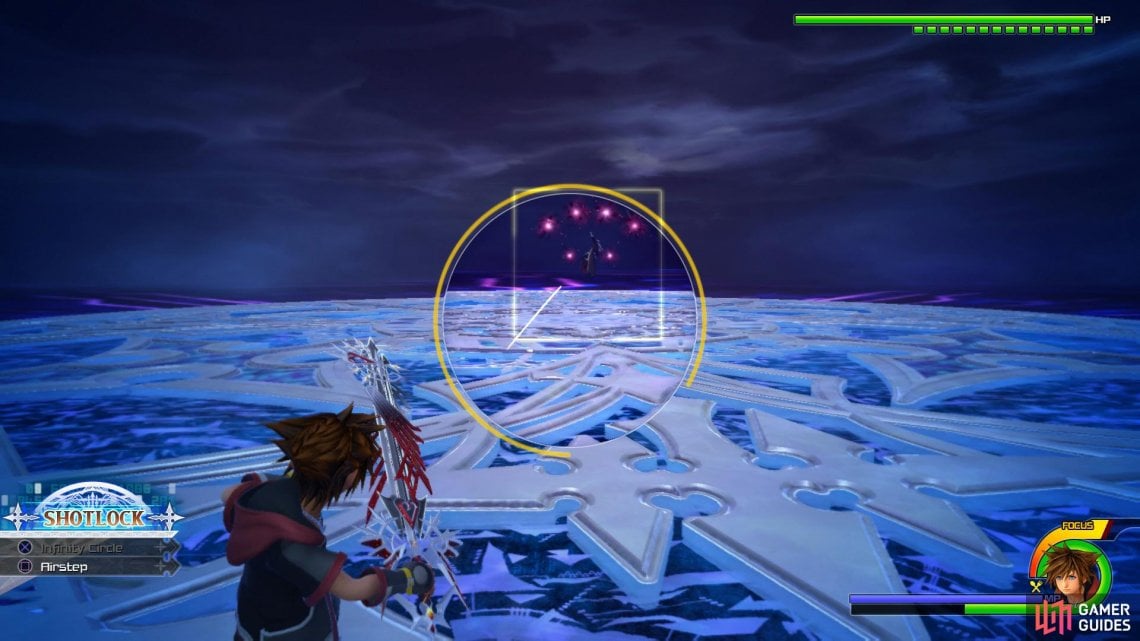 Similar to Dark Riku, Ansem can also use a Claw Trap of his own, if you see a shadow underneath Sora, keep dodging. This will usually be used alongside his Dark Mines that will close on Sora after the Claw Trap itself so be prepared to perform a second dodge after the Claw Trap. This is however a prime moment to Shotlock onto Ansem and Air Step over and score some attacks of your own, this will be your best method of opening him up to damage.

Finally, for phase one, Ansem will usually shoot three fast Darkness Waves at you across the screen, these can’t be deflected so dodge to the side at the last moment to avoid them. This attack will usually follow his Energy Barrier attack so always be ready following it. Once you’ve avoided the three waves, again Air Step over to him to score some free attacks.

Ansem is however, at his most deadly during his Desperation Move, an attack which transforms the entire arena into a shadowy realm. Once you gain control, you’ll notice Ansem has summoned two large Dark Orbs that will sit either side of Sora. After a short period of charging up, they’ll unleash a barrage of Darkness at Sora that will inflict status ailments should you be struck by it. This is best avoided by standing still and guarding through all the attacks and then following it up with an Air Step to launch a counter attack. Should you suffer the brunt of the damage, Ansem will trap Sora at the end of the attack dealing massive damage and resetting the arena. 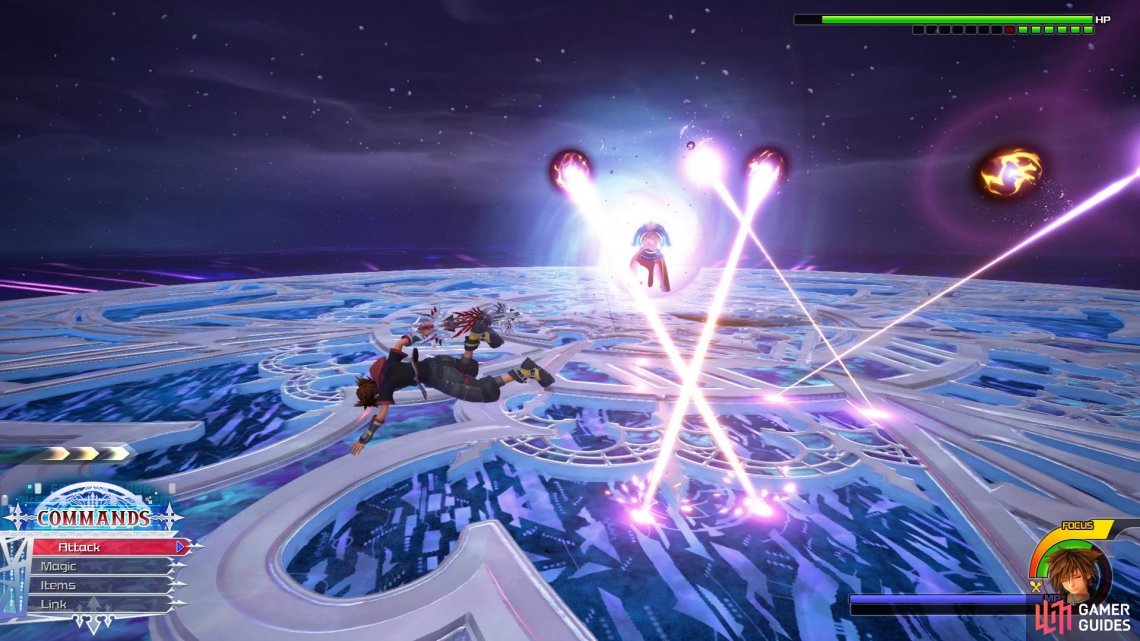 If you manage to avoid his final attack there however, Ansem will immediately begin pulliny you in while Energy Orbs fire at you, time your dodges away to roll through the lasers and you should avoid the lethal Shockwaves that follow. The battle will repeat itself at this point until he pulls you back into his Desperation Move once his HP drops low. At this point, you’ll have to dodge lots of Black Orbs, similar to a Bullet Hell game so keep to the outside and focus on evasion here rather than looking for openings.

The most difficult part about this battle is finding ways to attack Ansem. As he keeps his distance at almost all times, you’ll need to make full use of Air Step to close the distance and begin an assault of your own. Most of his attacks can be deflected however and once you learn the timing, the battle is not as difficult and chaotic as it might seem at first.