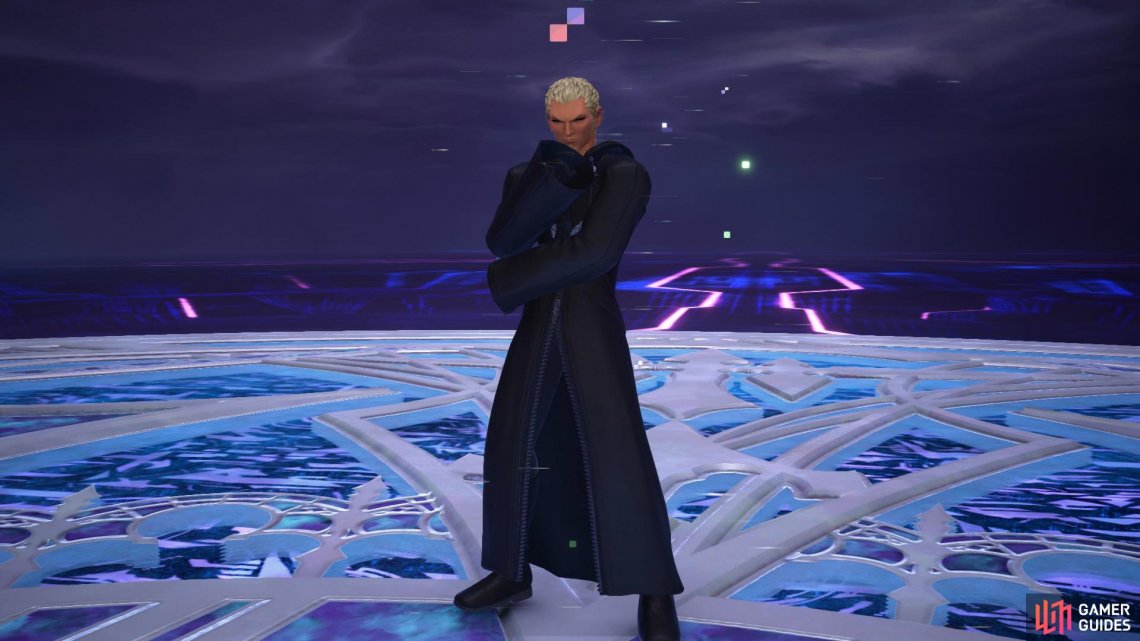 Did you know? Luxord first appeared in Kingdom Hearts II as one of Organization XIII. Using his card tricks, he stood in Sora’s way in The World That Never Was. He later returns in Kingdom Hearts III seeming to know more about what’s going on than he lets on.

If you’re played Kingdom Hearts II Final Mix, you’ll know all about Luxord and his Card Games. Rather than being a traditional battle, you’ll have to deal with this mini-game to take out Luxord and the first thing you’ll notice is the Time Gauge at the top of the screen. This acts as a HP bar of sorts and dealing damage to Luxord will slowly deplete his and restore a bit of Sora’s. This applies to Luxord too so if you find yourself getting hit constantly, you’ll find you’ll barely put a dent into him. The aim of the battle here is to use the Card Games that he’ll start (more on that later) to gain free openings at him. It is possible to damage him outside of these games but you’ll have to be spot on with your guarding to gain those opportunities. What’s more, you’ll want to deflect as many of the Cards that he tosses at you to make said Card Games easier as the ones on the ground will come into play.

His standard attacks will involve him tossing cards at you, these can and should be deflected although you’ll need to note that they come at different speeds. Should you be close to Luxord (which is dangerous in itself) when you deflect the cards, you can follow up with a Combo to deal some damage. He’ll also float in the air and shoot two barrages of cards at once at you with the second coming after a short delay. Again, if you’re close enough after the second barrage you can retaliate with a Combo. 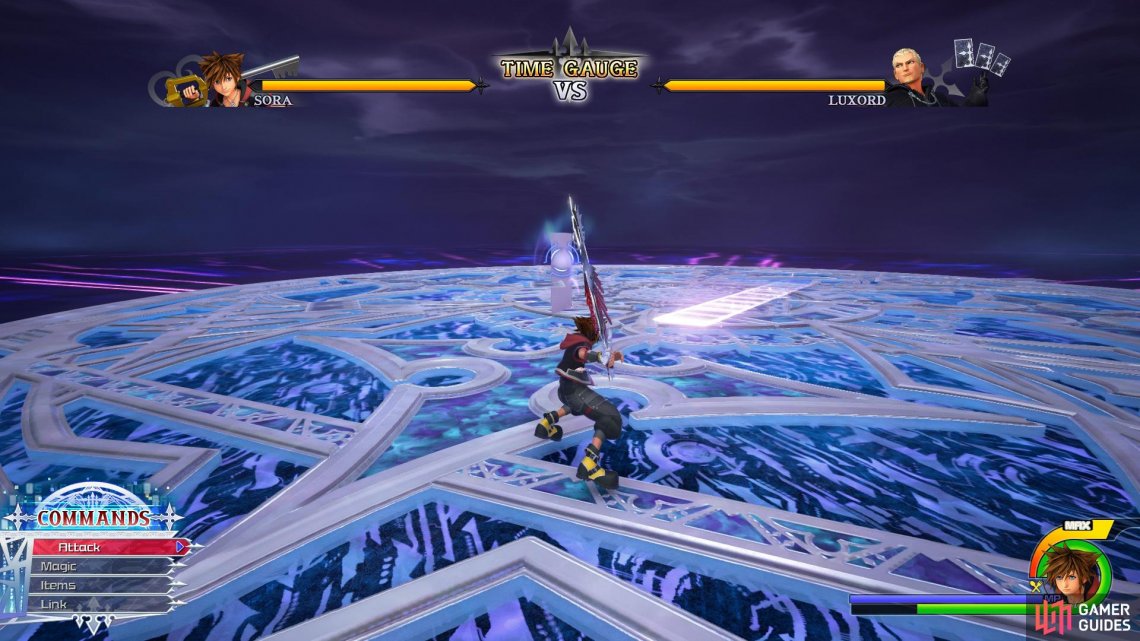 (1 of 5) The cards move at different speeds

He will also cause cards to float around Sora’s head before homing in on him at once, wait a little and then block the attack. Finally, he can use an attack where he will cause two large cards either side of Sora to strike him, wait until they begin to close in and then dodge roll forward to avoid it. You’ll need to do this three times to fully avoid this attack.

His first Card Game involves him circling around him and one will have a O on it, this is the card you need to hit. The other cards will explode and end that part of the game so you’ll need to time your strike carefully to hit the card (a task not easy with the way Sora swings the Keyblade). Once you hit the card, they will speed up and you’ll need to hit the next until no cards remain, allowing you to Combo Luxord without interruption.

He will follow this up with a second Card Game where any of the cards left on the ground that you didn’t deflect will all prop up. Here, your task is to find all of the cards with a O on it while avoiding the exploding card he sends underneath you, it’s a good idea to continue you dodge rolling here to get around quicker and avoid the blasts. You’ll need to alter the camera to spot which ones have the O on it and after striking enough, one card will feature Luxord himself. Strike this one to gain yet another opportunity to Combo Luxord, this is by far the best way to damage him in this battle. 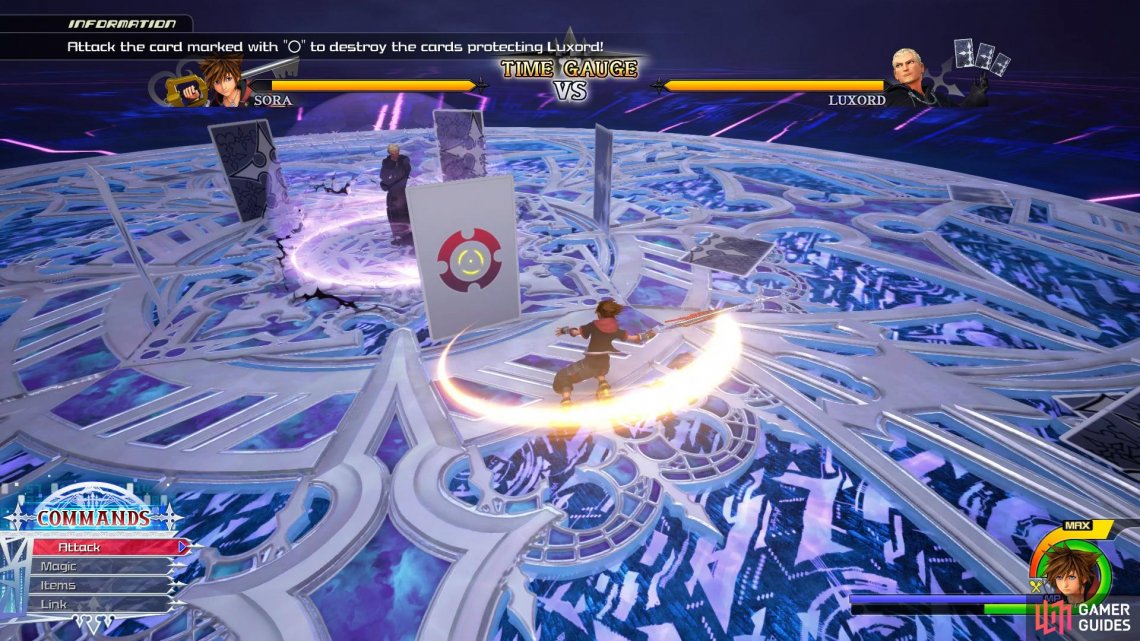 The final Card Game, Luxod’s Desperation Move, isn’t as daunting as it may look at first. The entire arena will be covered with cards and some will have Luxord himself here, you must seek these cards out and reveal them to proceed to the next part of the game. This becomes a lot easier once you realise you can use the [TRIANGLE]/[Y] button to activate it rather than using Sora’s wild swing and hitting the other nearby cards. The circle of cards will expand until you reach the final circle, repeat the same steps and you’ll open Luxord for more Combos again and the fight will revert back to the first phase.

The difficulty with Luxord lies more with Sora himself as you’ll often find yourself hitting cards you’re not attempting to due to the way Sora swings the Keyblade. Once you get used to his swing, his regular attacks aren’t too difficult to block and you should have no issue with finishing him off.