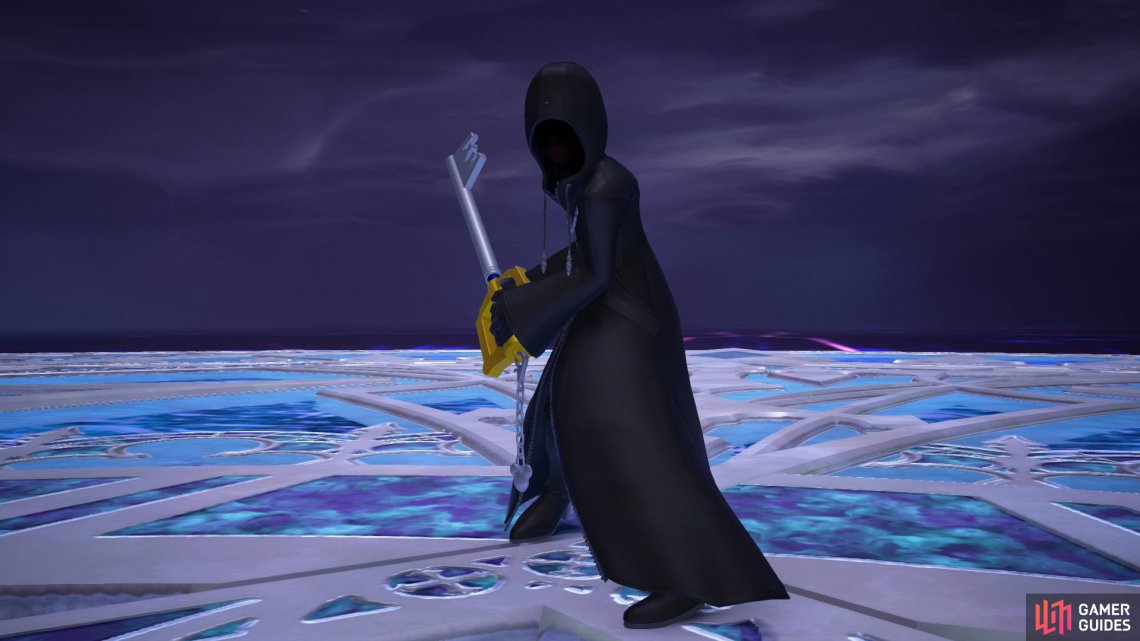 Did you know? Xion was introduced in Kingdom Hearts 358/2 Days and was an integral part of the partnership between Axel and Roxas. Xion was a replica and as such, she was wiped from everyone’s memories at the end of the game. In Kingdom Hearts III, she’s able to have her heart reconnected and due to the connection to Sora, she has the ability to wield Keyblades too.

Note: In order to unlock this battle, you must first defeat all of the other 11 Limitcut battles.

As you may expect from a battle locked behind defeating the other 10, Xion is your toughest encounter yet and there’s many factors to take into account if you have any chance at defeating her. Being able to effectively switch between blocking and dodging is key here and it’s a battle that gets tougher as it goes on.

To begin with, Xion is incredibly fast to the point you’ll almost certainly want to stay locked-on just to keep track of her. Her standard Keyblade Combo is used often and you can deflect all of the hits and follow up with a counter of your own. Alternatively, from range, she will toss her Keyblade at Sora three times, you can block these and launch a counter too and indeed these two counter opportunities are your best option for attacking Xion during this fight.

As she attacks, Xion will let loose Pillars of Light, these can and should be blocked as their movement is unpredicatable and you can face several at once. It’s imperative you avoid getting struck by these as each hit will temporarily decrease Sora’s Max HP all the way down to 1HP if you get hit constantly. This state will only persist for a short while before reverting so should you find yourself in this unfortunate situation, forget attacking and focus on survival until your Max HP returns to normal levels. Note that Xion will attack with regular Keyblade Combos during these Pillars of Light so you’ll need to be fully alert to block these and get in counter opportunities. 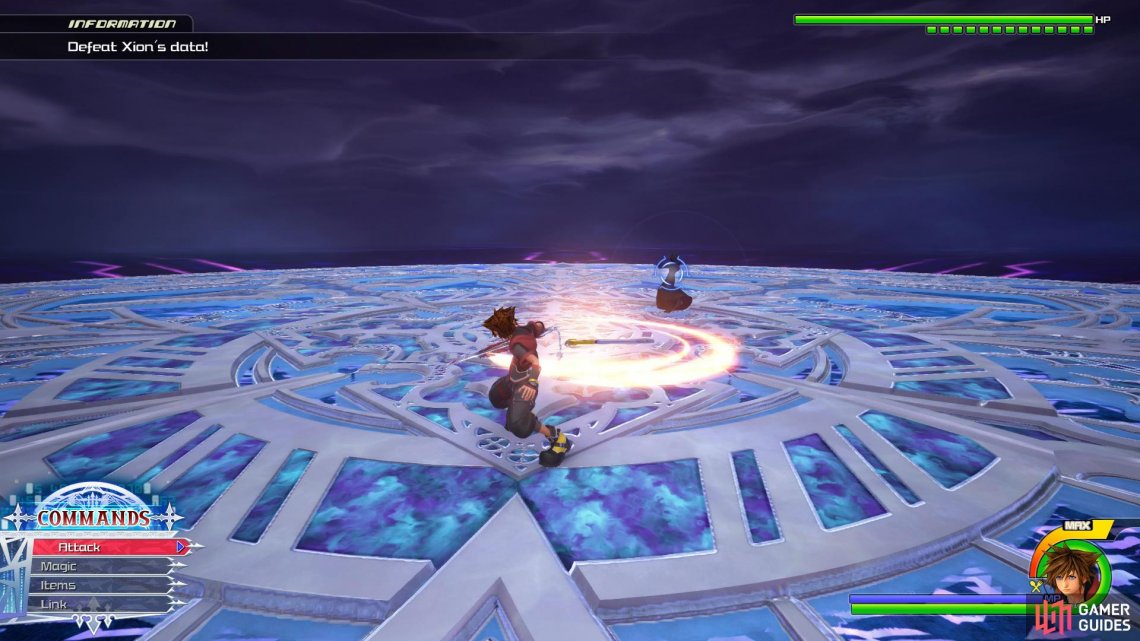 (1 of 4) You can easily counter her Keyblade Throw

When Xion glows yellow, she’ll gain Armor and her moveset will change up as she begins jumping to Sora’s location and unleashing Yellow Pillars of Light along with shockwaves. She’ll increase the speed of her regular Keyblade Combo here as well so it can be tough to block through this but you need to if you want to open the counter opportunities it presents. You can choose to wait this out and focus on dodge rolling around the arena but not only will you have to evade for a while, you won’t be dealing any damage to her. It may take several attempts to get the timing down here to effectively learn how to block her attacks but once you do, it’ll become second nature. She’ll end this phase by casting multiple barrages of Pillars of Light that will follow Sora, keep dodging to the side to avoid it.

Believe it or not, that wasn’t even Xion’s Despeartion Move as she’ll use this as you get her low on HP by transforming the arena into one bathed in light. The arena will be split in two by multiple Pillars of Light and Xion will attack by flying out from the middle, you need to time it right and deflect this to open a counter opportunity and begin stripping her Armor. You’ll also need to deal with a non-stop barrage of the regular Pillars of Light here so it’s extremely easy to find yourself with low Max HP while she’s non-stop attacking you. There’s no easy way to go about this, you’ll need to learn how to time your blocks here and gain the counters to force her out of her Desperation Move and finish her off. 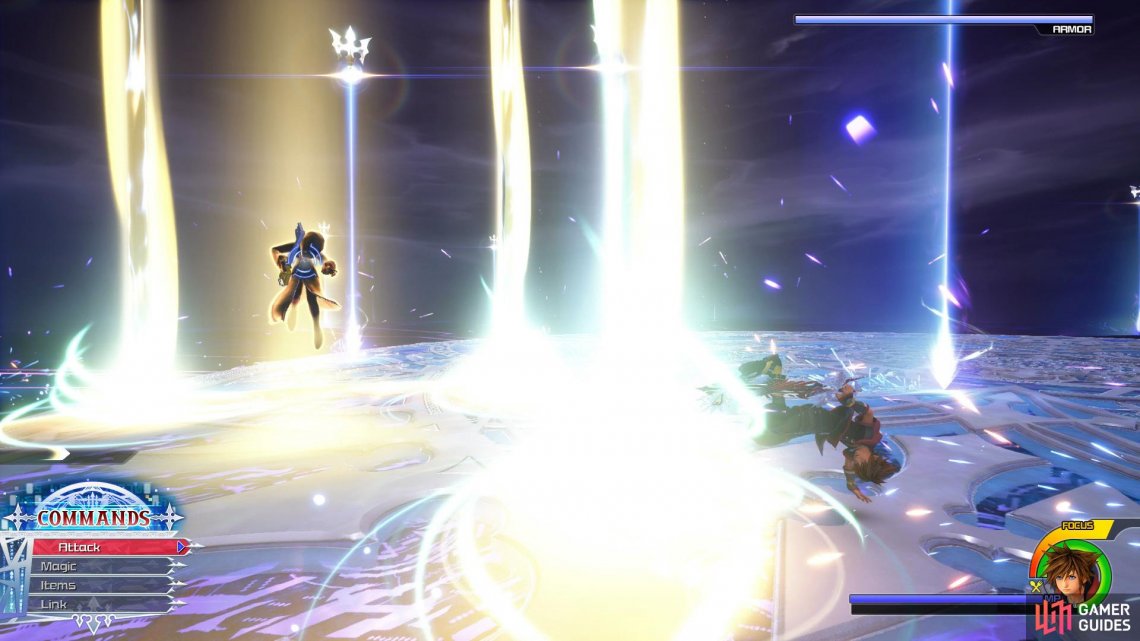 (1 of 6) Xion leaves Shockwaves behind when she has Armor

Xion is one of the tougher but more fun battles in Limitcut and it’s one that will take many times to learn until you’re ready to master it. Blocking is everything here and once you learn when and where to block, the rest of the battle should fall into place allowing you to dispatch her.