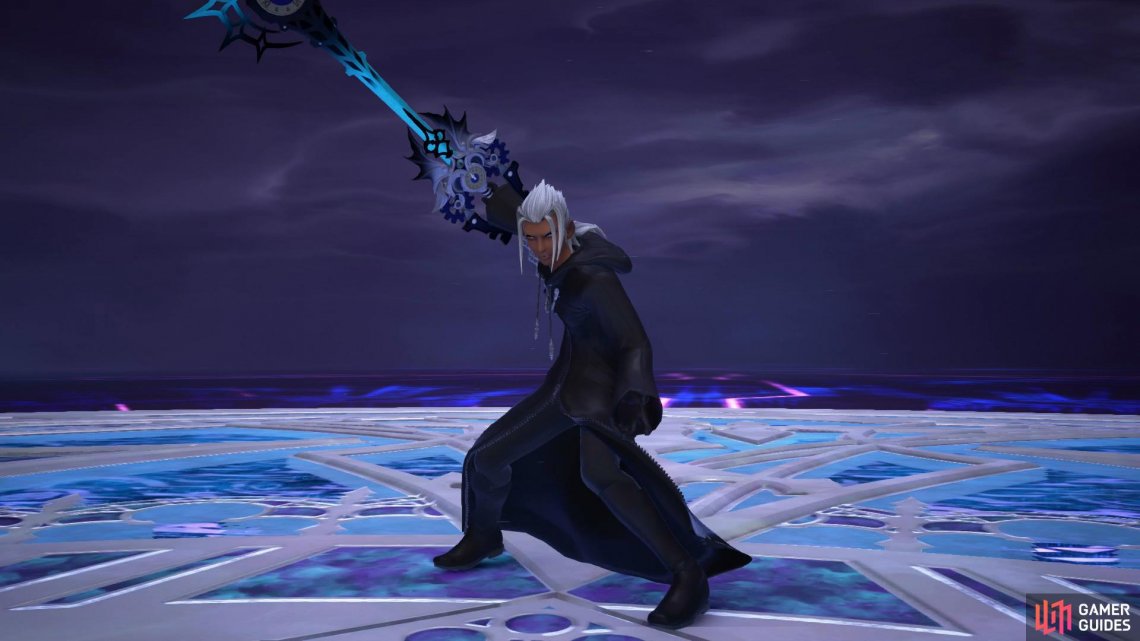 Did you know? Young Xehanort was the final boss of Kingdom Hearts Dream Drop Distance on the Nintedo 3DS and PS4. He’s a form of series antagonist Xehanort from the distant past.

Young Xehanort can be found in the first door to the left when standing at the top of the stairs. Although Young Xehanort has a handful of skills available to him, he’s still a deadly foe that can kill you in an instant if you get caught in his flurry of attacks.

Young Xehanort’s most simplest attack is his Ice Barrage, this attack will shoot out several icy projectiles that will home in on Sora’s position, if struck by them, you’ll find yourself Frozen in place. Due to the nature of this attack, it’s better to wait for them and to deflect them rather than trying to outright dodge them. As the battle goes on, Young Xehanort will mix this attack in with his others or cast it twice in succession.

His Keyblade Combo comes in the form of a Whip attack that he’ll try to bait you into deflecting before he even strikes, leaving you open. He’ll teleport up to three times before striking with a Whip attack after, once again you should look to deflect these where possible. This is one of the attacks he may mix up with the Ice Missiles. He can also perform a Spinning attack from the air, he’ll perform this three times with a final strike down upon the last, this is one of the best moments to deflect the three Spinning attacks and then dodge to the side of the last downward strike to leave him open and then follow up with a counter of your own. Young Xehanort can also recover his own HP by floating in the air and spinning his Keyblade, if you see this, rush over and strike him to knock him out of it. 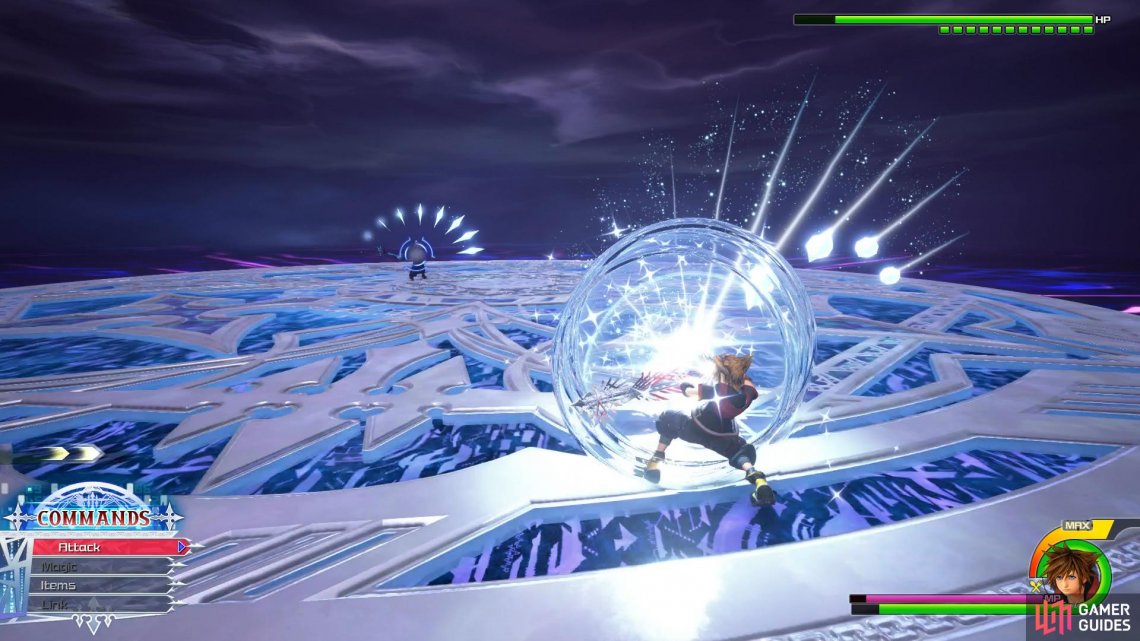 (1 of 5) Stand and deflect the Ice Missiles

His most deadly attack is his Time Stop attack, look for when he teleports away and then look to the ground to briefly see a large Clock appear under him. He’ll let out a Whip attack shortly after and should be struck by it, time will stop and you’ll be followed up with a combo that will most likely leave you in the Critical state. Although this attack can be deflected, it’s often safer to just dodge the attack altogether as failure to deflect properly will leave you on the brink.

The problem here then becomes looking for openings to exploit Young Xehanort and dealing some damage of your own. The best, as previously mentioned, is doding to the side of his final spin attack and following up. Likewise, if you’re mastered blocking his whip attack, look for the [CIRCLE]/[B] button command to appear, allowing you to dodge to his side and score some more free attacks on him.

Always prioritize your HP as always and keep your MP on hand for a Curaga should you need it (likewise, Elixirs if you’ve stocked up on them). Should you find yourself in a bother with your MP still recharging, consider making use of Rage Form and abuse the invincible frames (be sure to use the Situation Button to get out of the form as soon as possible). Ultimate Form from Ultima Weapon is also useful for this, the Form Change is a lengthy allowing you to buy some precious moments for that MP to finish recharging. Once you take Young Xehanort below half of his HP, he’ll use his Desperation Move, a larger and greater effect of Time Stop. During this time, you’ll have to avoid the teleporting Young Xehanort and strike away at him to deplete the armor gauge and cause the attack to end. He’ll repeat this Desperation Move one final time once you reduce him to 1 HP, at this point, focus on deflecting his attacks and deplete his armor to finish the battle.

Tip: If you’re really struggling, you can abuse Links (especially King’s Flare) to bypass all of the boss’ Desperation Move. You’re invulnerable during this state so you can skip avoiding most of the attacks.