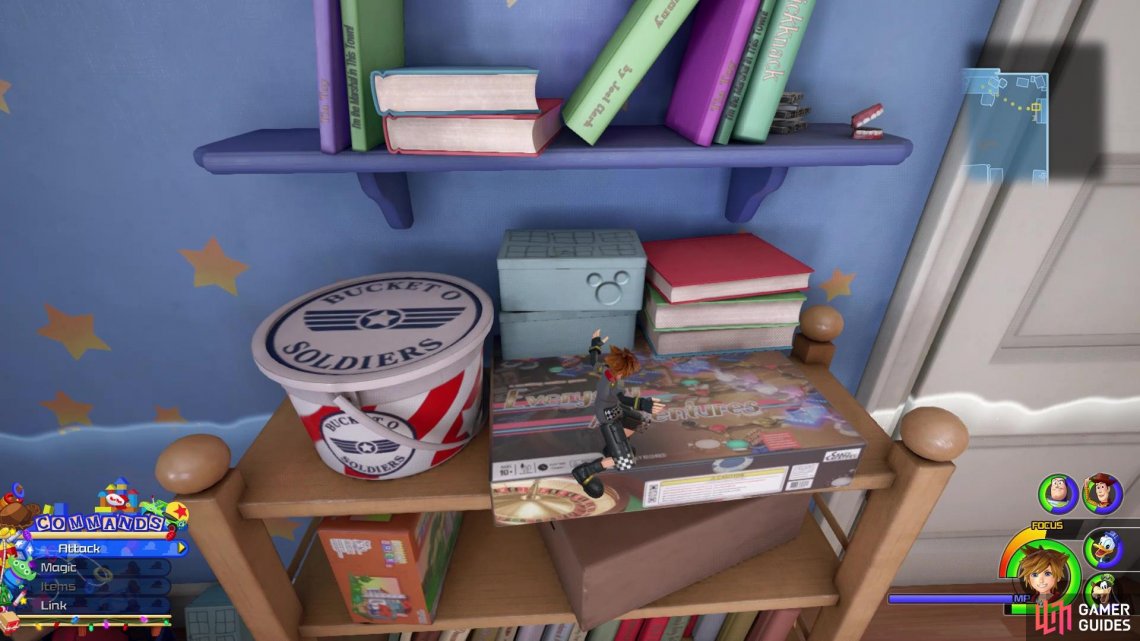 The first Lucky Emblem in Toy Box can be found inside of Andy’s Home. While facing the door to his room, look to the left of it to find a bookshelf. The emblem will be on a blue object on the top shelf of this wooden bookshelf (the floor one, not the ones on the wall). 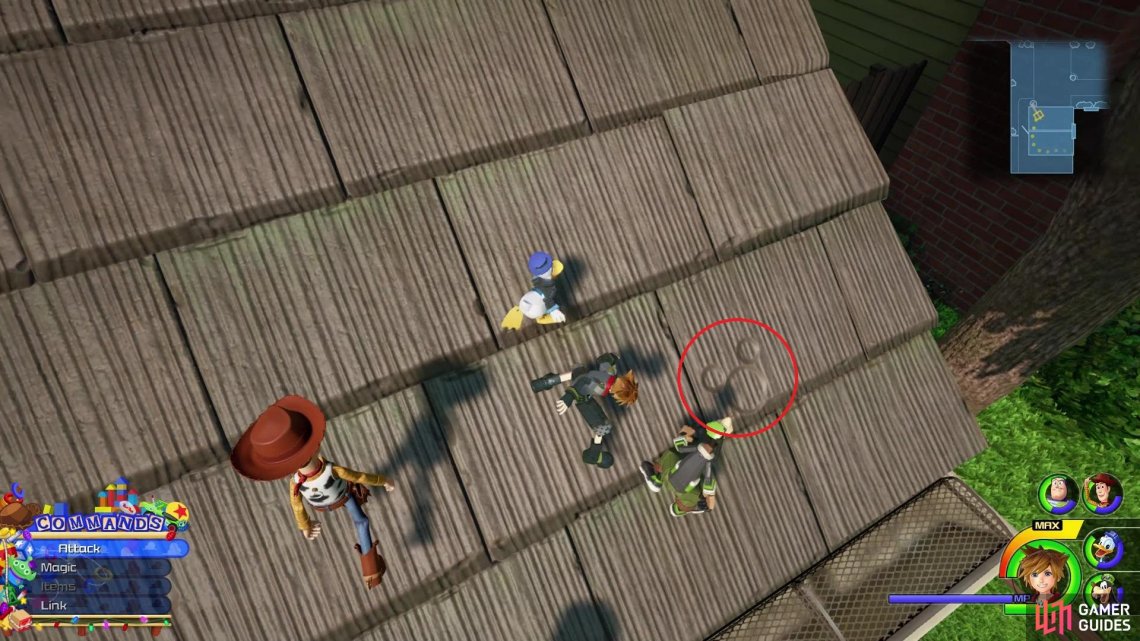 After clearing out Andy’s Room, you have the option to go out one of two windows to the yard/streets below. You will want to use the window above the save point, which will put you on the roof. Go to the slope towards the street side and look in the one corner for the emblem. 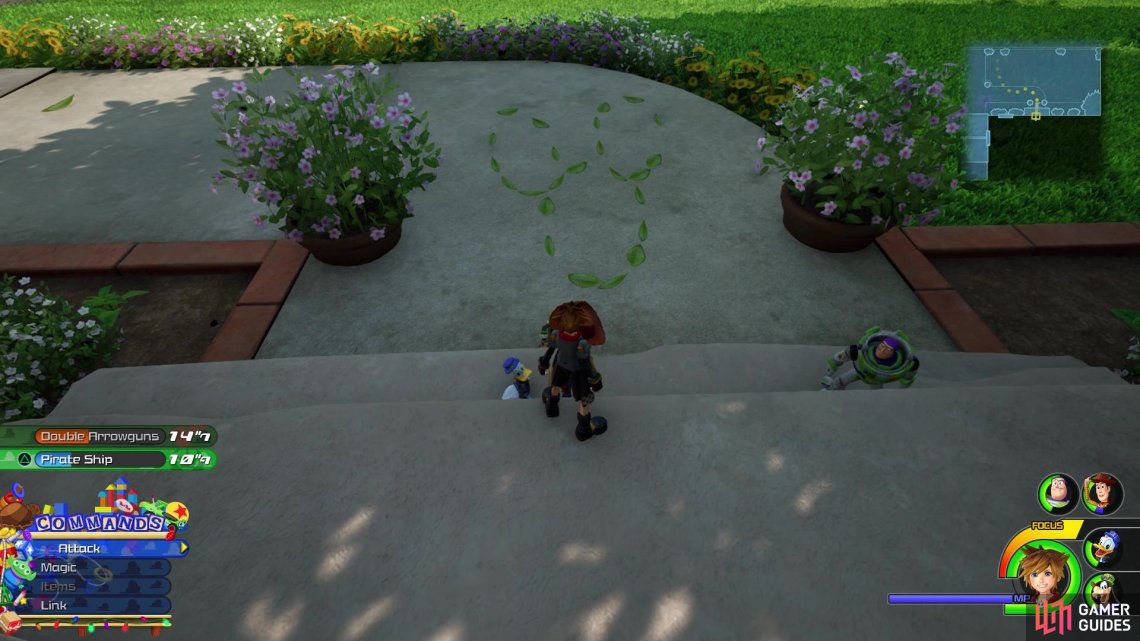 Head for the front door of Andy’s house and you should notice some leaves on the sidewalk in between the two plants there. These leaves, when looked at with the front door to your back, form an emblem. 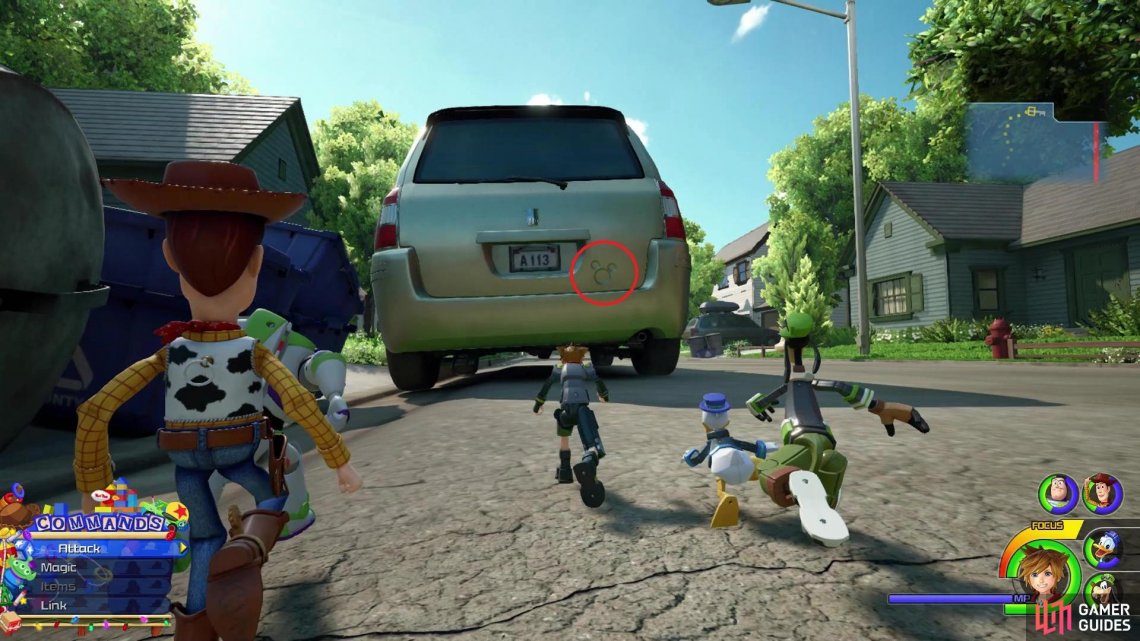 From the previous emblem, run across the street and look to your east to spot a silver-ish vehicle. On the back side of the vehicle is the emblem. 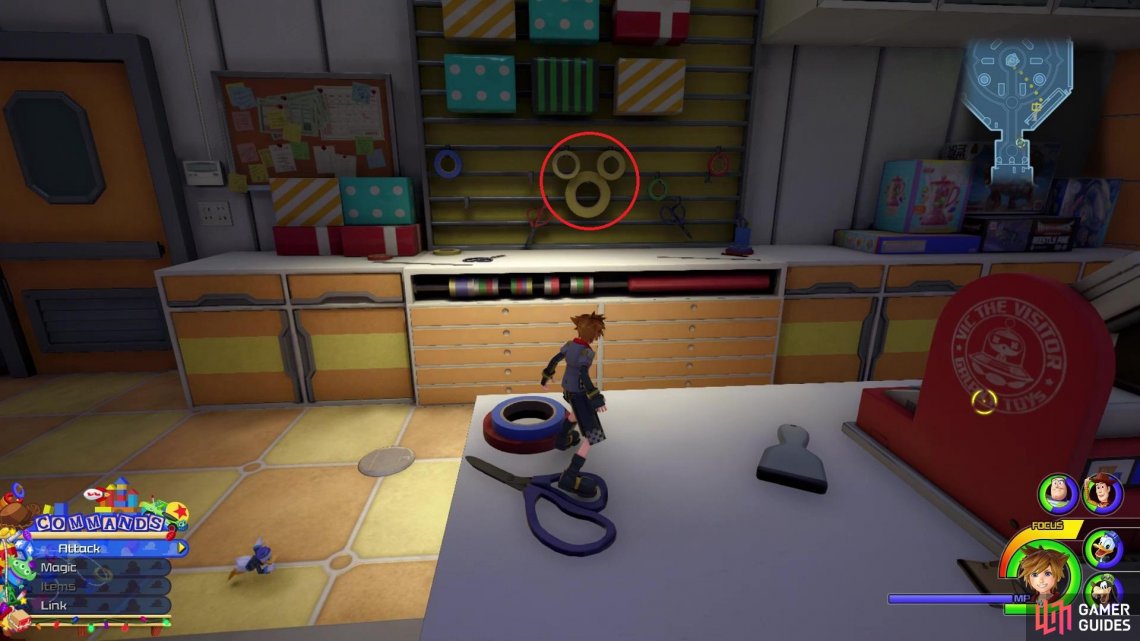 Once you make it to Galaxy Toys and clear the first area of story triggers, climb onto the counter with the cashiers. If you look at the one wall behind the cashier, you might be able to see some tape in an odd shape. That tape hanging on the shelf is in the form of the emblem. 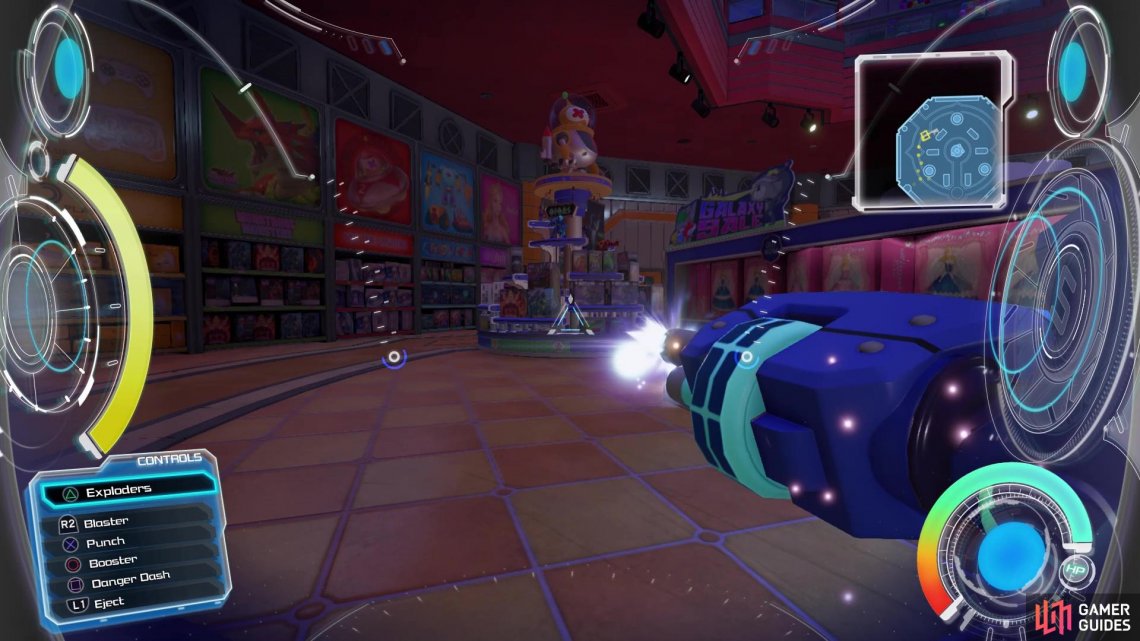 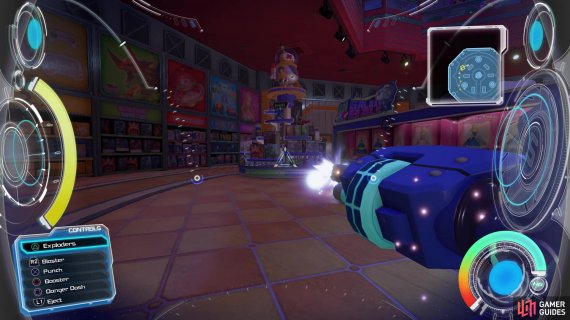 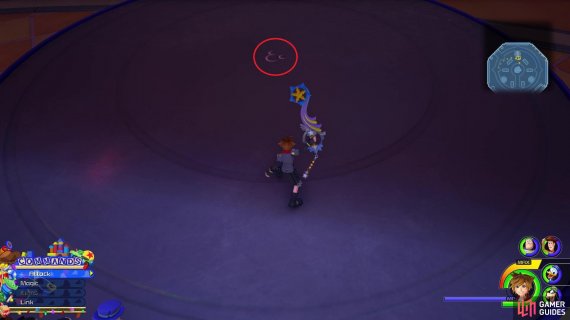 Shoot down this stack of toys in the north (left), to find the Lucky Emblem underneath (right)

On the first floor, there are three large stacks of toys sitting on round platforms. You will need one of the Gigas robots in order to knock the toys down with its basic shot. The one in question is the stack in the northern part of the floor, which is hiding the emblem underneath it. Note that you need to be pretty straight on to take a picture of the emblem, as it can be kind of finicky. 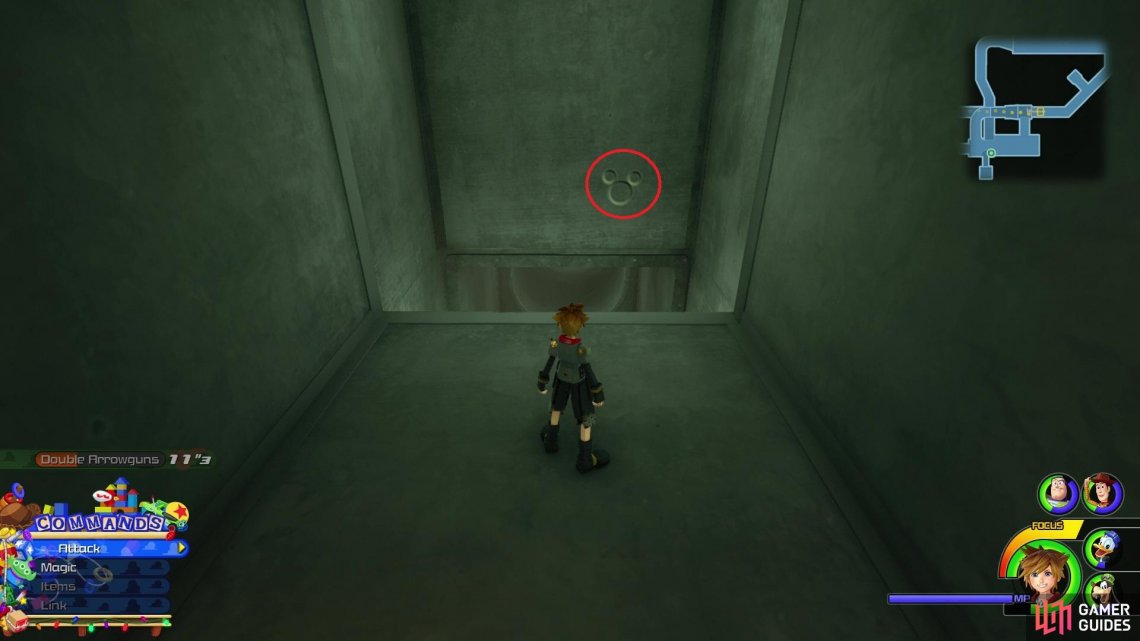 Upon reaching the second floor and dealing with the story events there, you will be asked to go into the vents in the action figures section of the store. Once you do, progress until you reach the first fan that blows you upwards. There are two exits here, an upper one that has some treasure and a middle one that will take your further inside. Go inside the middle vent and look back at the vertical vent behind you to find the emblem. 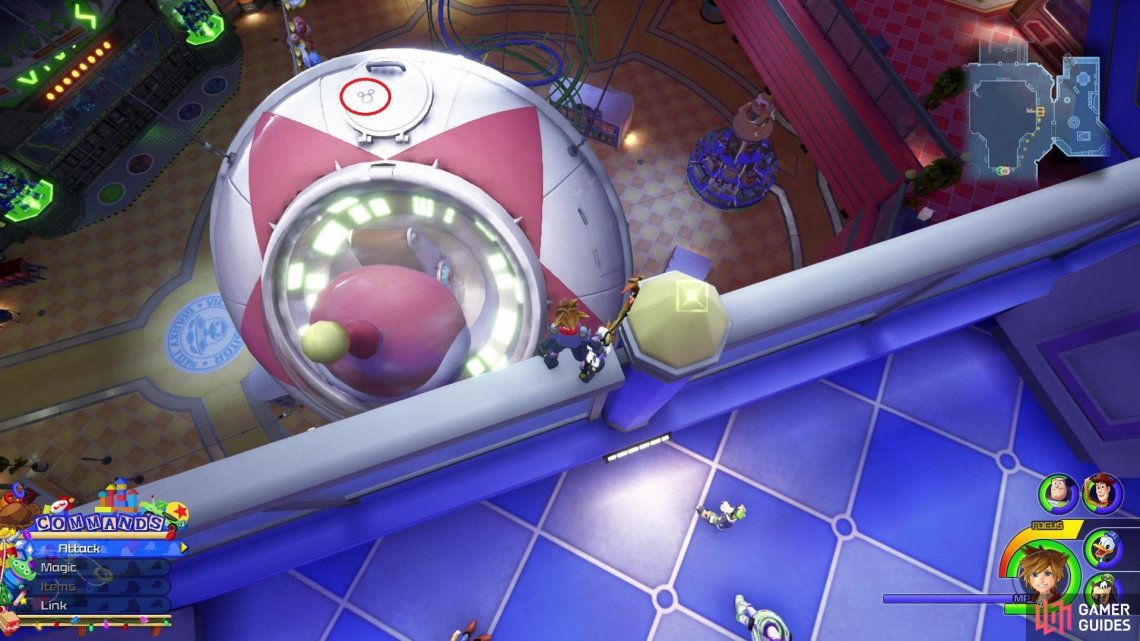 You won’t be able to get to this emblem until you reach the third floor of Galaxy Toys. Once you do, get on the railing on the eastern side and look over until you spot the UFO ship below you. The emblem will be on the ship itself and you’ll need to actually be on it in order to take its picture. 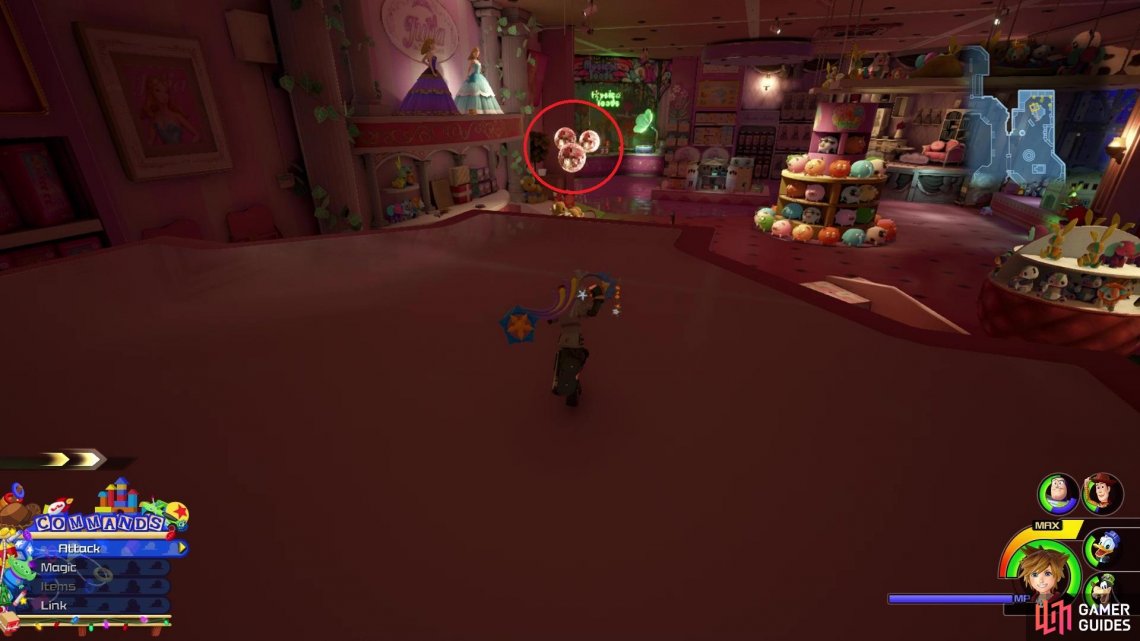 This emblem is located in the Babies and Toddlers store, near the cash register. There are some balloons attached to strings near the front desk that form the emblem shape when looked at from a specific point. This is from the top of the shelf to the north of the balloons, so get there and line up your shot from that angle to get the emblem. 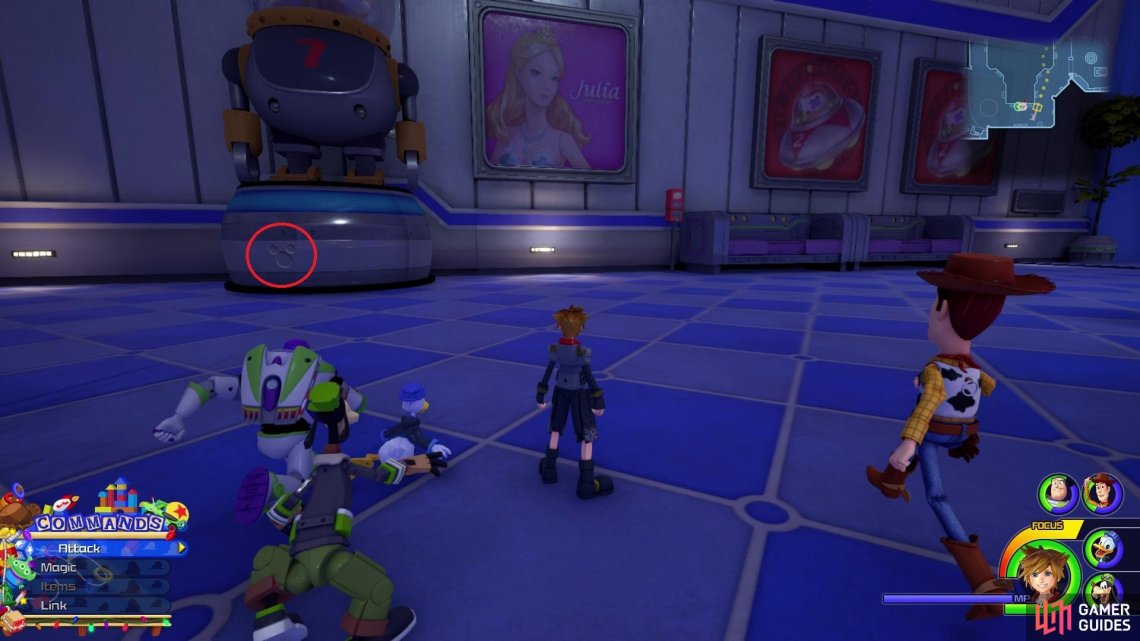 South of the save point on the third floor is a robot on a stand against the wall. The emblem will be on the stand itself. 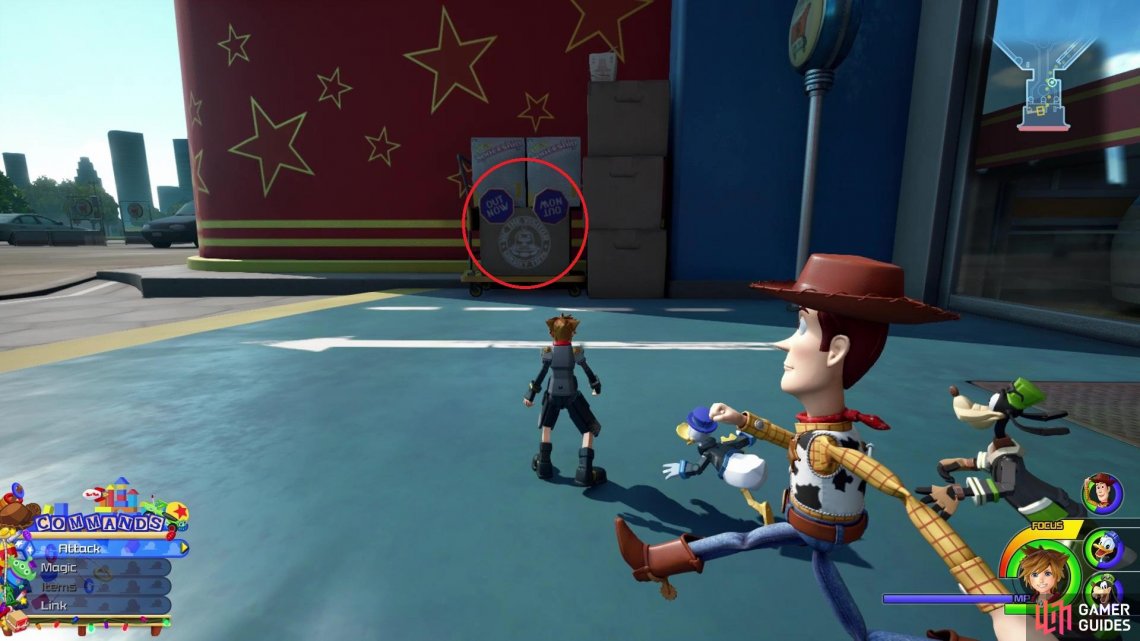 The last listed emblem in Toy Box is actually located near the entrance to the Galaxy Toys store. From the save point, head outside and look to the west for some boxes. On the one box is a “Vic the Visitor” logo and connected to this are two “Out Now” things, which actually form the emblem as a whole.