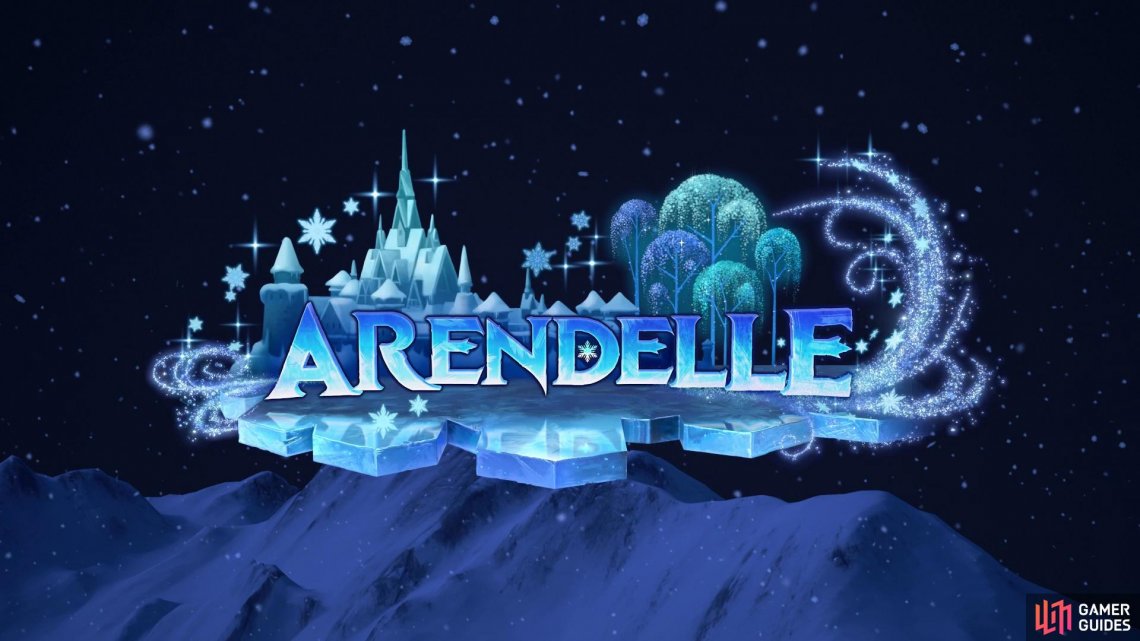 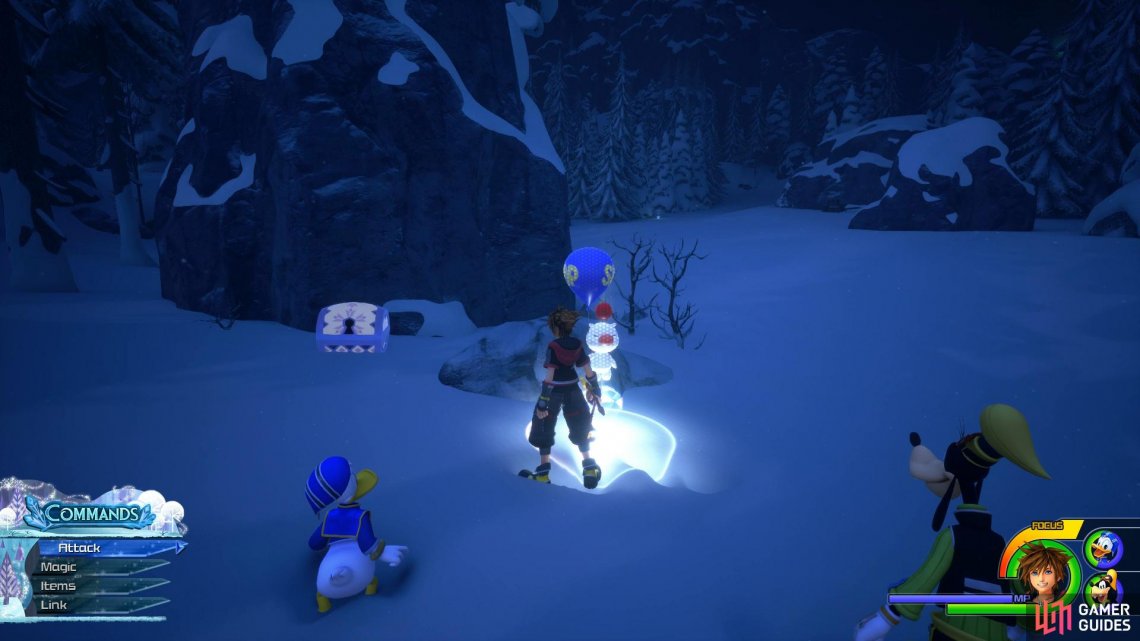 Sitting next to the Moogle Shop.

You’ll find the first chest next to the first Moogle Shop you encounter in Arendelle. 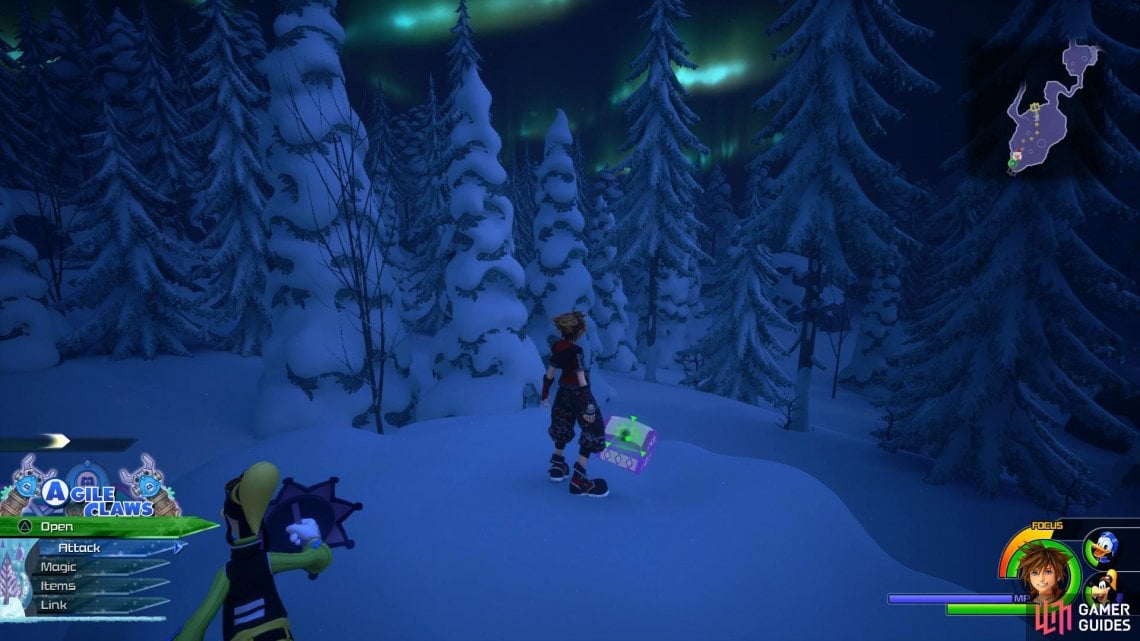 Search on top of the rock to the north.

From the previous chest, head north and leap on to the rock at the end. 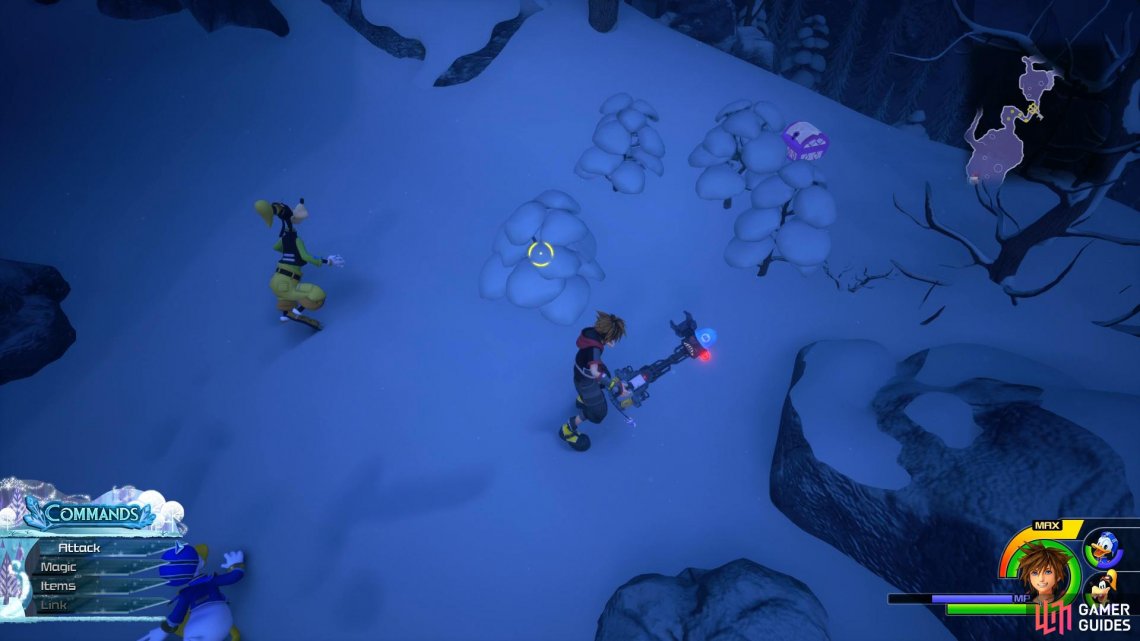 Search behind the bushes.

From the previous chest, head up the path to the northeast and look behind the bushes. 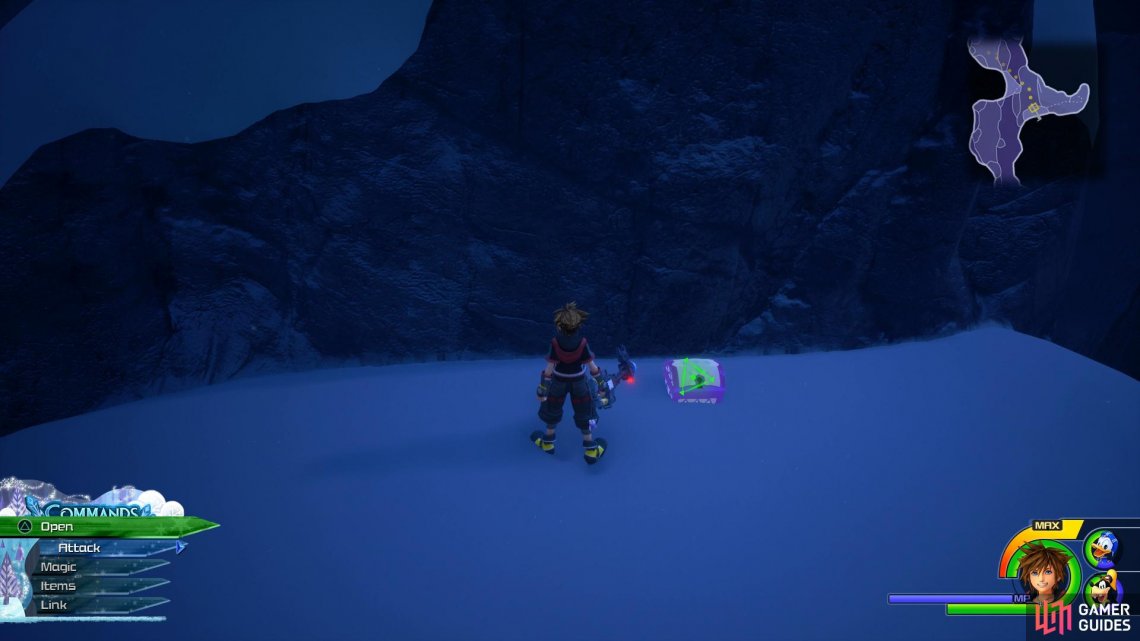 Use the icicles to reach this chest.

Head to the Gorge Save Point and head up the walls until you reach the group of Popcats. Jump over to the platform on the other side and then you’ll notice icicles that you can Airstep to. Airstep over to the right to reach the platform with this chest. 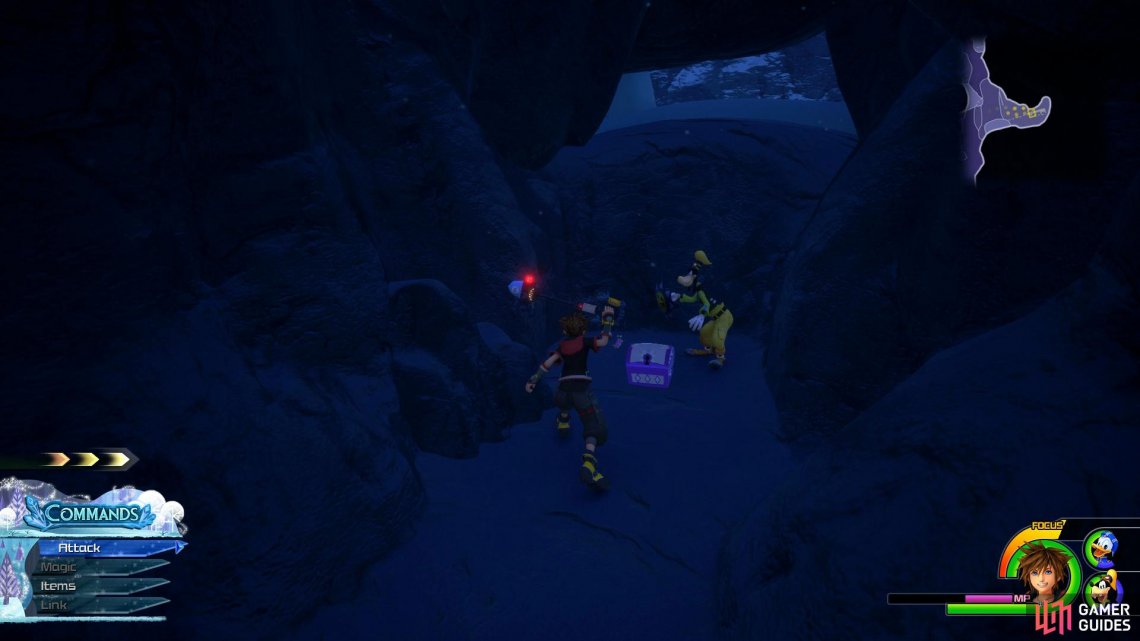 Search the cave behind the Popcats.

Head to the Gorge Save Point and head up the walls until you reach the group of Popcats. Upon defeating them, you’ll notice a cave with this chest inside. 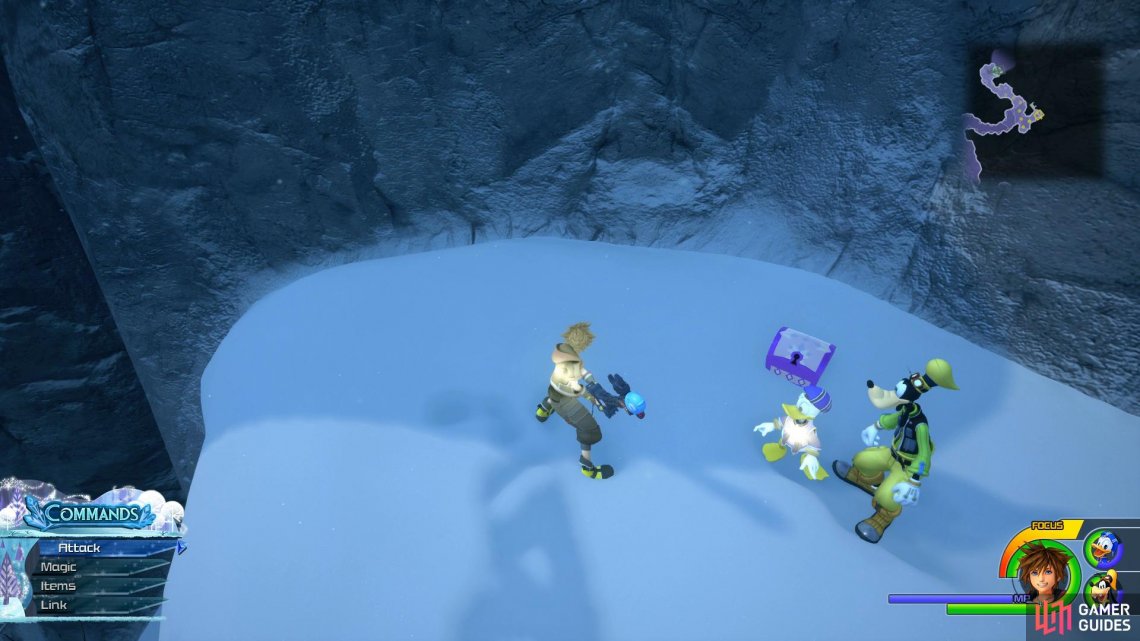 Leap to this platform from the southwest.

Once you reach the Snowfield, run down the first wall and then head up the hill to the southwest. Turn back around to face the northeast to find a platform you can leap to where you’ll find the chest. 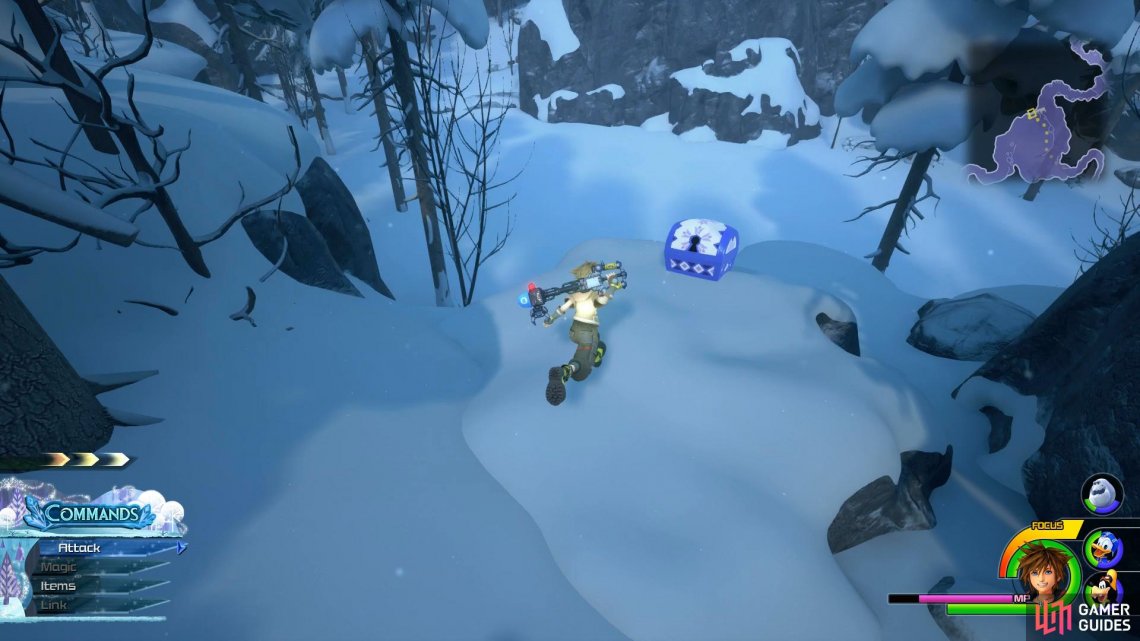 Follow the edge to the north in the clearing.

Head to the large clearing in the Snowfield and tale the small hill up to the north. Follow this northern edge and search behind the large rock to find this chest. 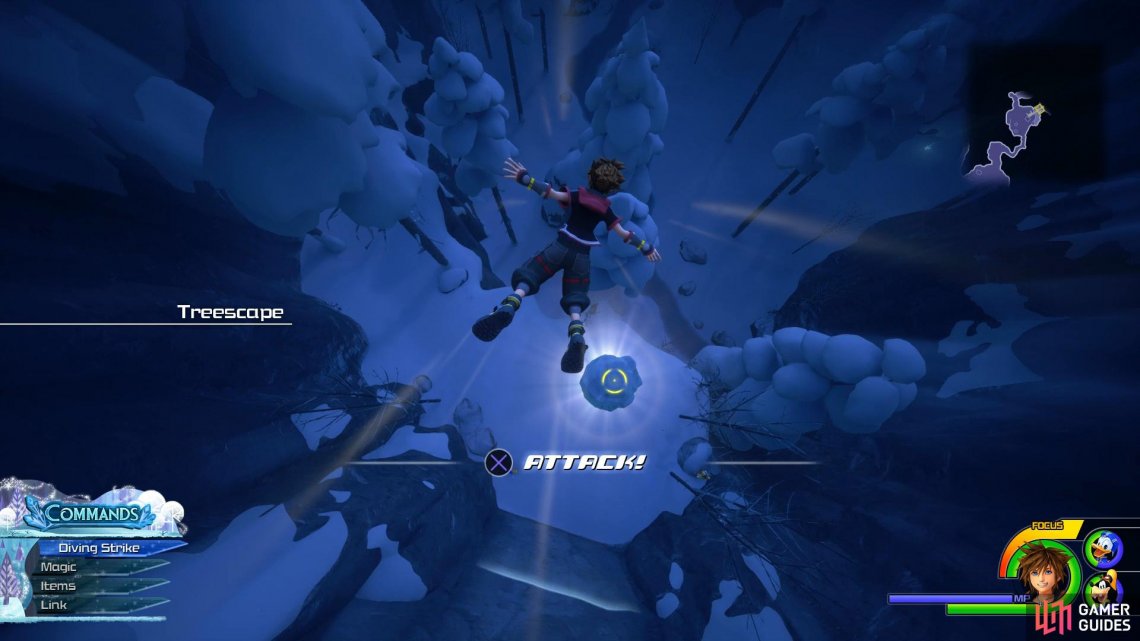 Leap off the edge and strike the ice to reveal this chest.

Head to the Gorge Save Point and head back south until you reach an intersection. Take the eastern path to a cliff edge and leap off, striking the large chunk of ice to reveal the chest. 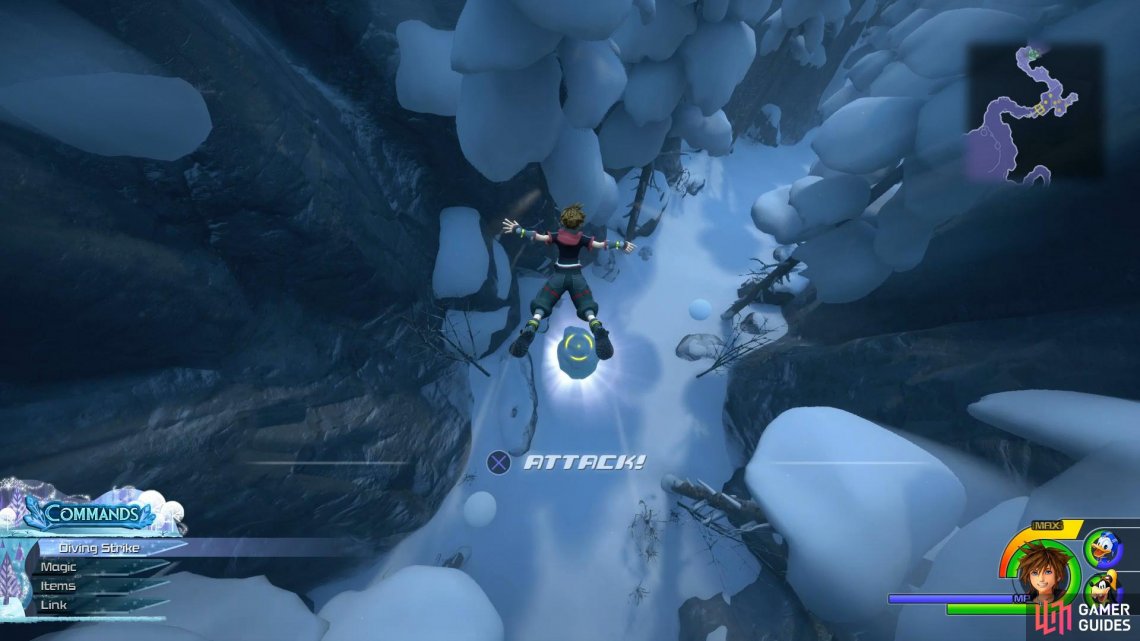 Strike the ice while falling to reveal the chest.

Head to the Snowfield Save Point and drop down the first two walls. Upon dropping down the third, you’ll spot a large chunk of ice you can strike to reveal this chest.

Treasure #10 - Map: The Labyrinth of Ice¶ 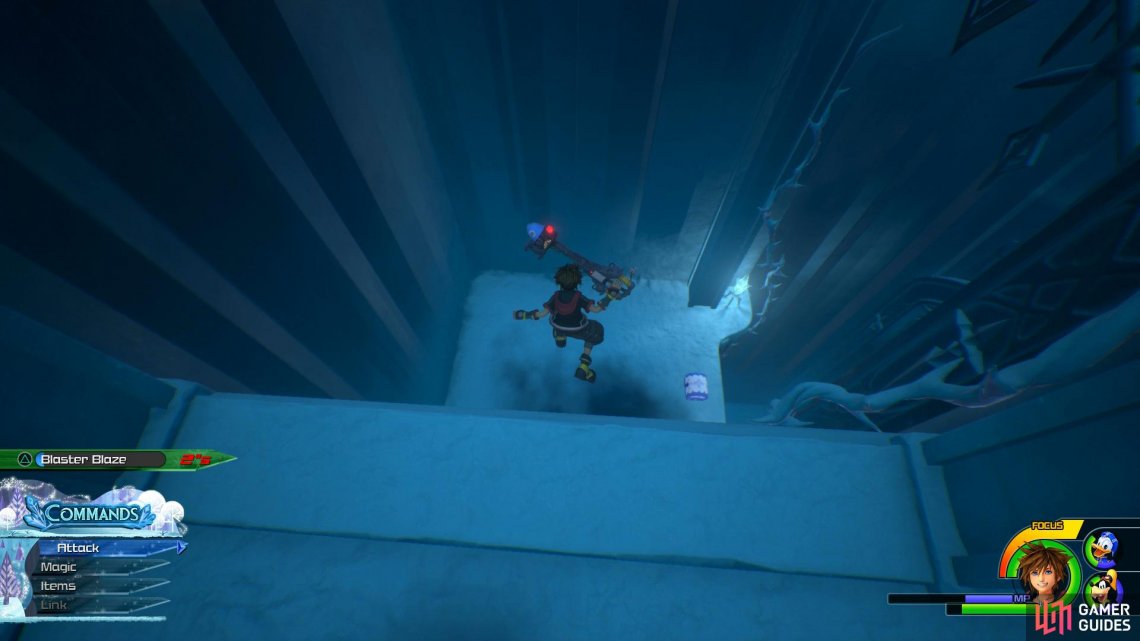 Break the ice wall to find this platform.

Head to the Labyrinth of Ice’s Middle Tier and head up the stairs. After defeating the Popcats, look on the wall to your right and break it open where you’ll find the chest on the platform below. 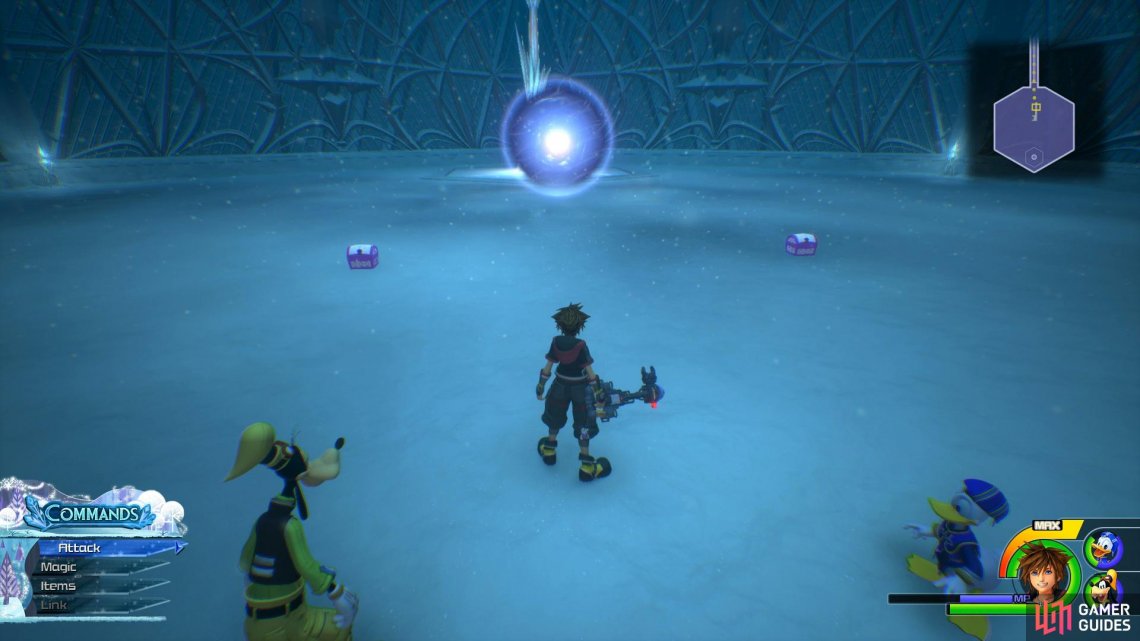 Head to the exit of the Labyrinth of Ice.

Head to the exit of the Labyrinth of Ice, in the Upper Tier, to find this chest right before the portal. 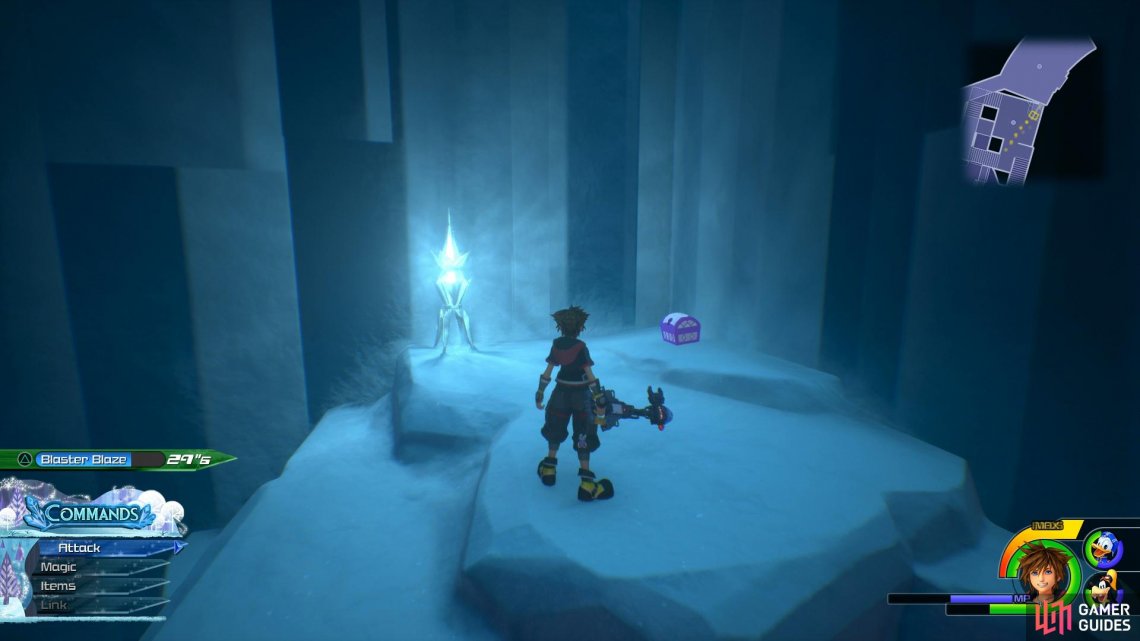 Climb the rocks in the corner.

Head to the Labyrinth of Ice’s Middle Tier and follow the path through the first ice wall. In the next room, climb the rocks in the northeast corner to find the chest. 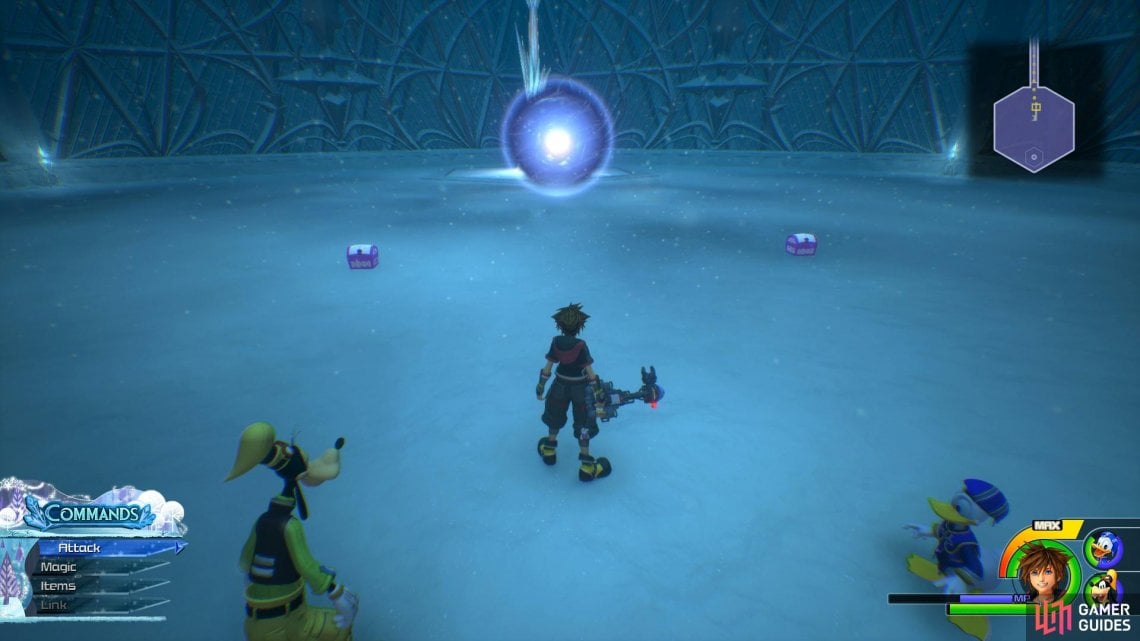 Right before the portal.

Head to the exit of the Labyrinth of Ice, in the Upper Tier, to find this chest right before the portal. 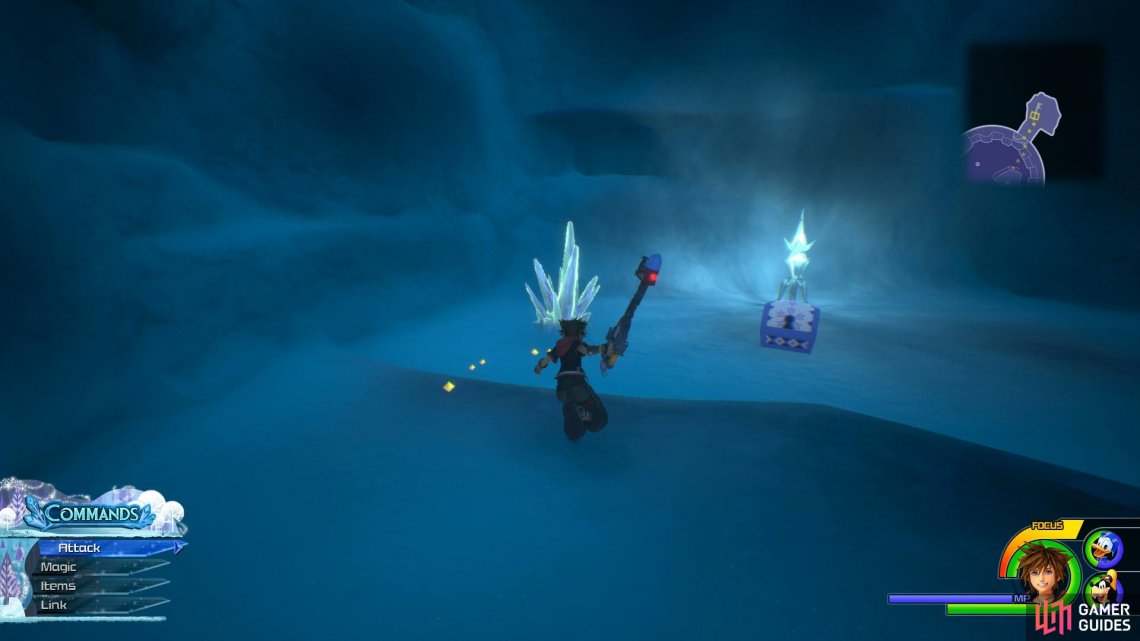 Spin both pillars to find this pathway.

Head to the Labyrinth of Ice Save Point and spin both pillars in the room. This will open up a room to the northeast where the chest awaits. 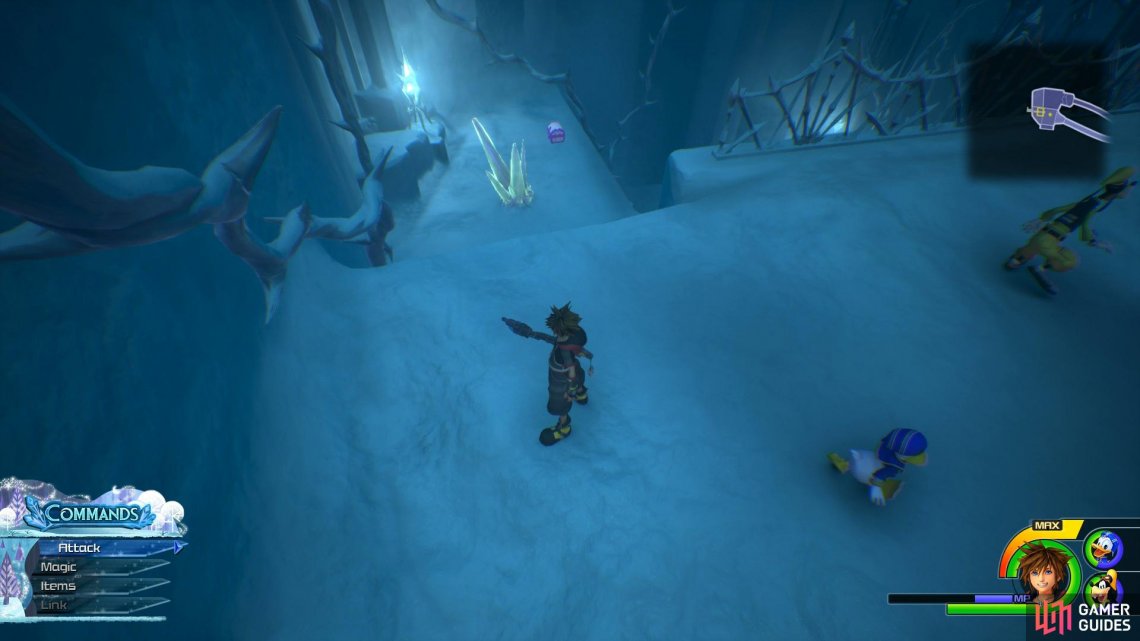 Leap to the higher grind rail.

Head to the Middle Tier of the Labyrinth of Ice and you’ll eventually come across a Rail Gauntlet. While riding this, you’ll come across another above you, jump to this and land on the platform at the end. Look below this platform to find another housing the chest. 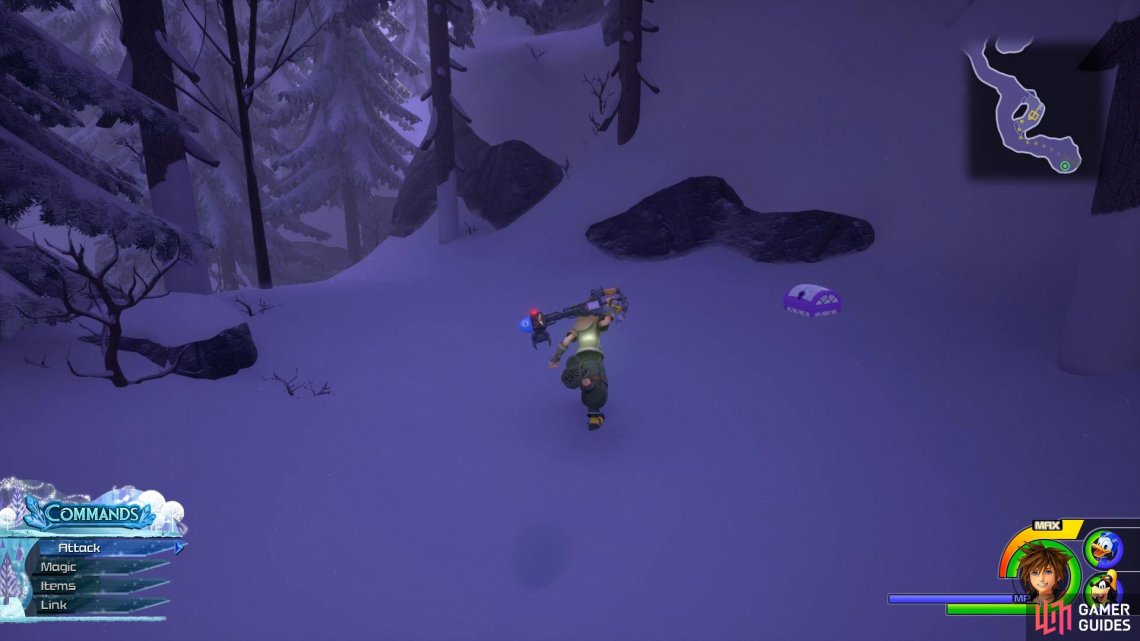 Head east at the first intersection.

Head to the Valley of Ice Save Point and head north to the first intersection. Go east here to find this chest sitting in the corner. 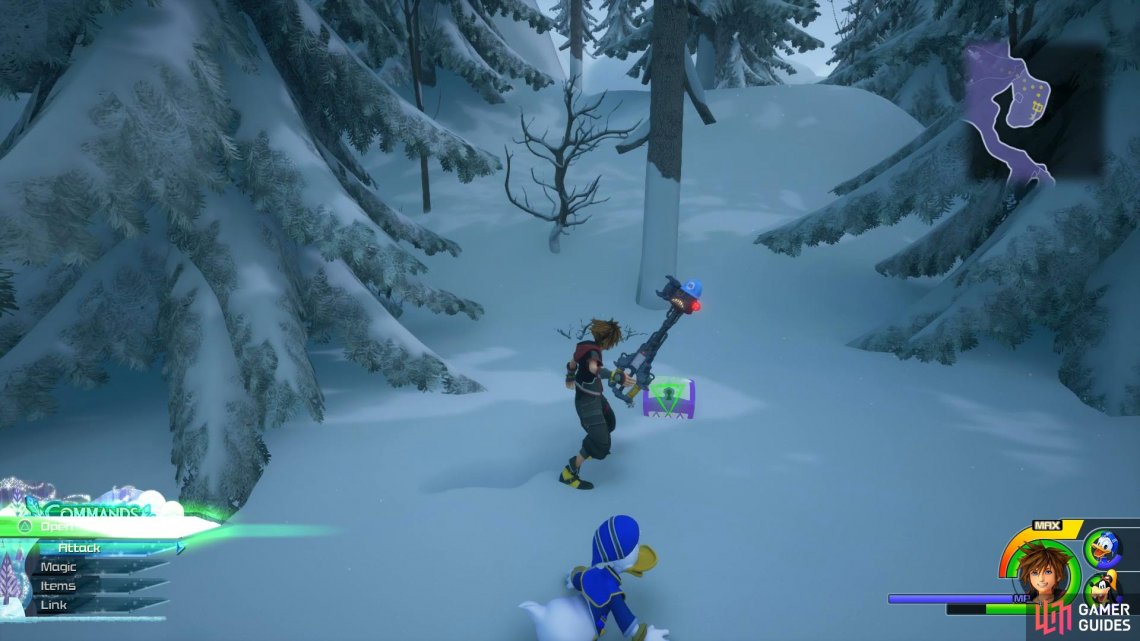 Head east in the central area.

Head to the Valley of Ice Save Point and continue until you reach the central area where you reassembled Olaf. Head to the eastern edge, behind the trees, to find this chest. 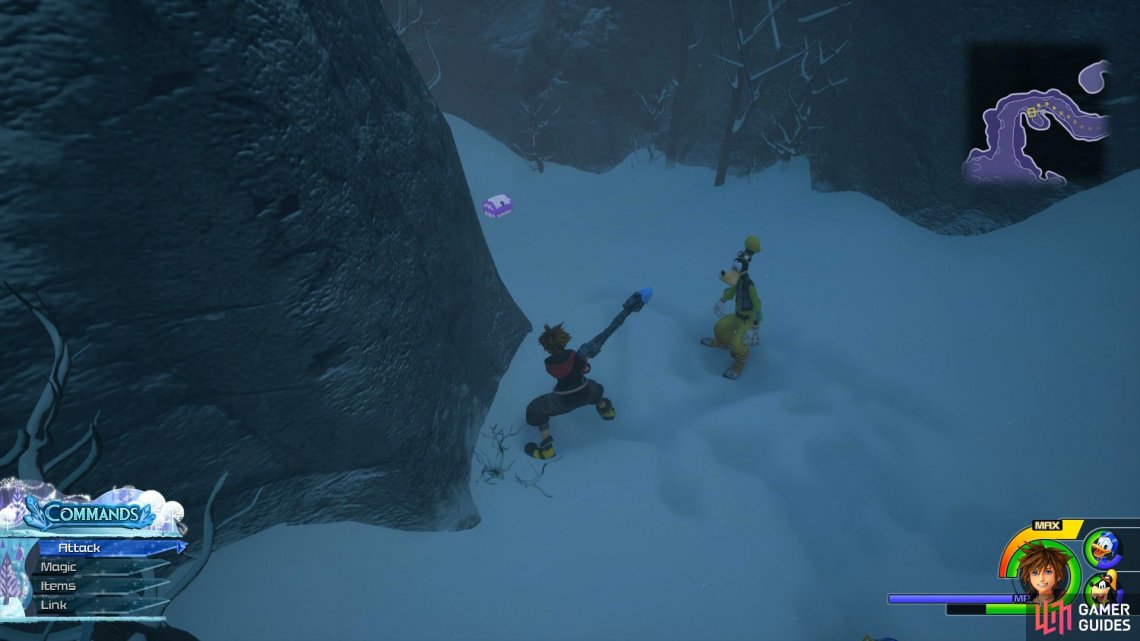 Go west at the intersection.

Head to the Valley of Ice Save Point and continue past the central area to the southwest. As you travel up this path, you’ll come across a small passageway to the west, the chest sits in the corner. 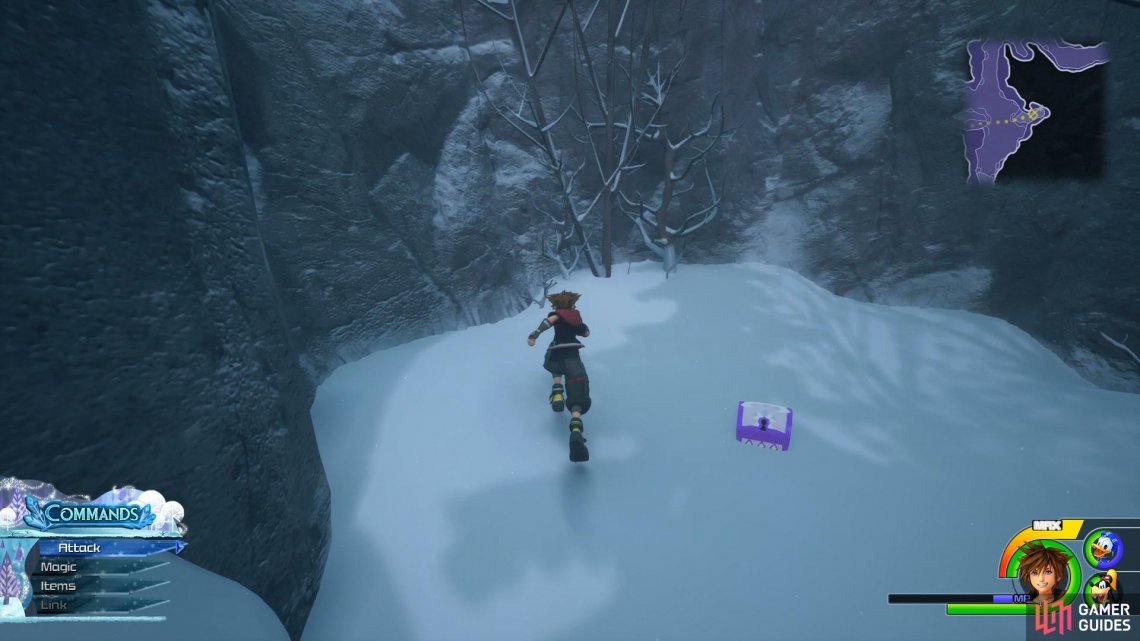 Air dash to this platform.

From the Valley of Ice Save Point, continue until you reach the second clearing (past the previous chest) and take the small hill up to the east. Turn back to the north to see another platform you can Air Dash over to where the chest awaits. 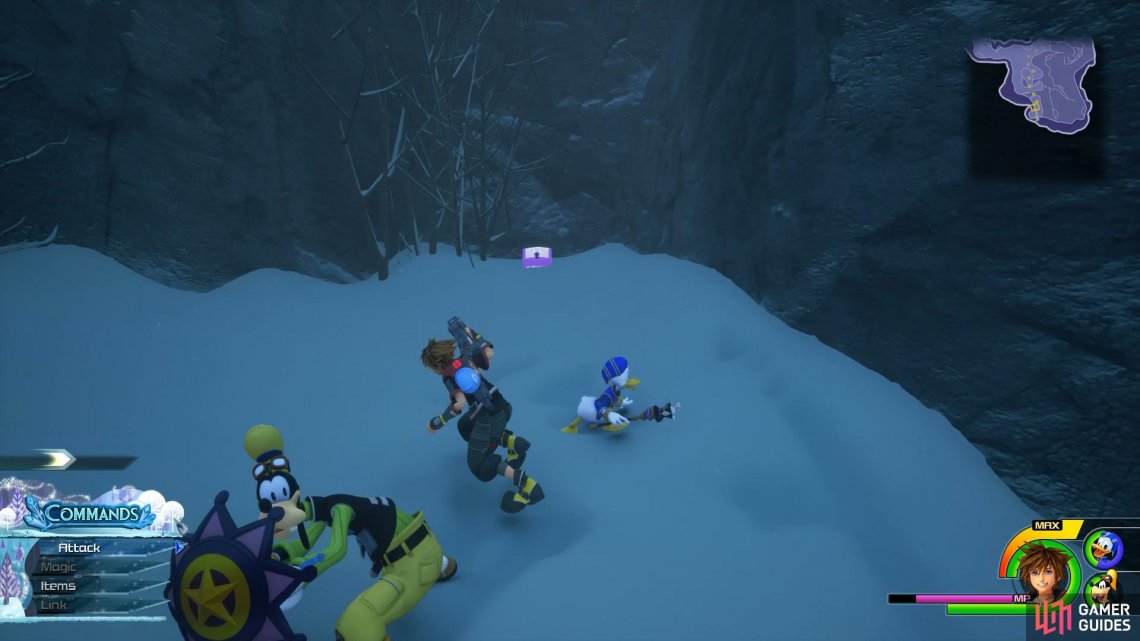 Doubleflight over to this platform.

Continue past the previous chest to the next clearing as you work your way up higher. Once you reach the hill, look to the left to head up higher. You’ll notice a Parasol Beauty on a higher platform, Doubleflight over to find the chest in the corner of this platform. 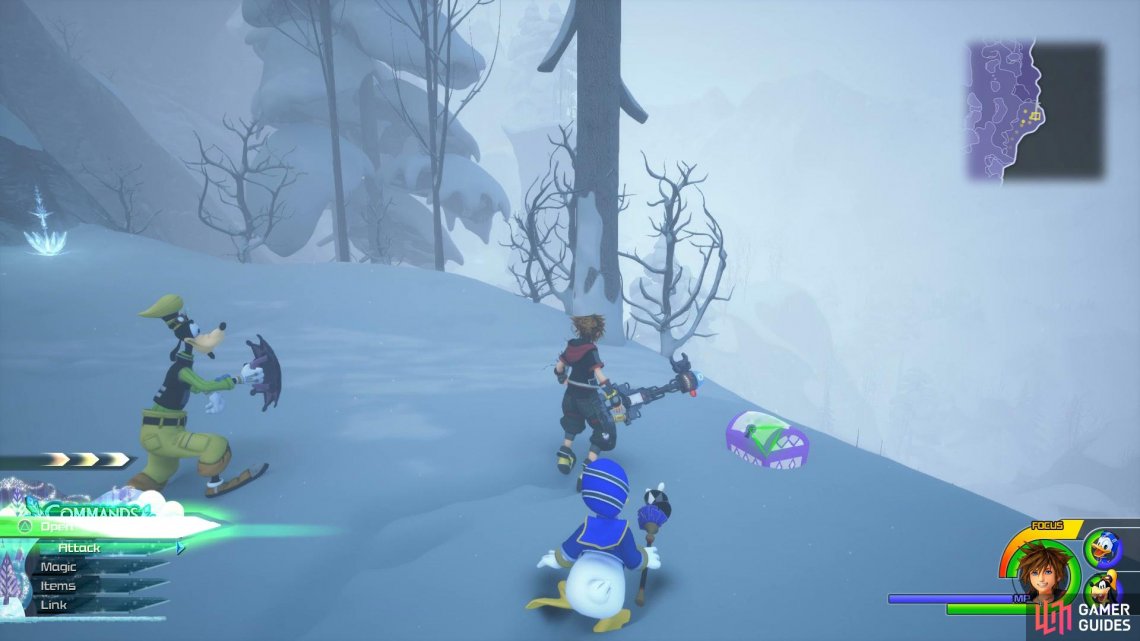 Drop down the wall to reach this area. 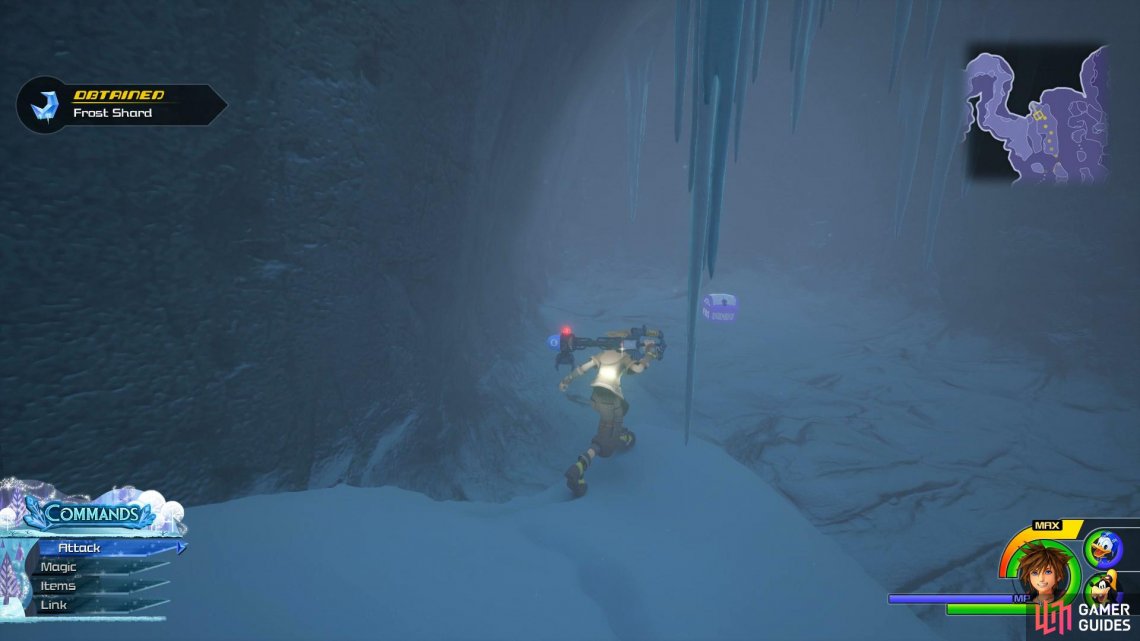 Search inside the cave.

In the previous clearing, climb the platforms to the right of the gust of wind and take a few more over to reach a cave, the chest sits inside. 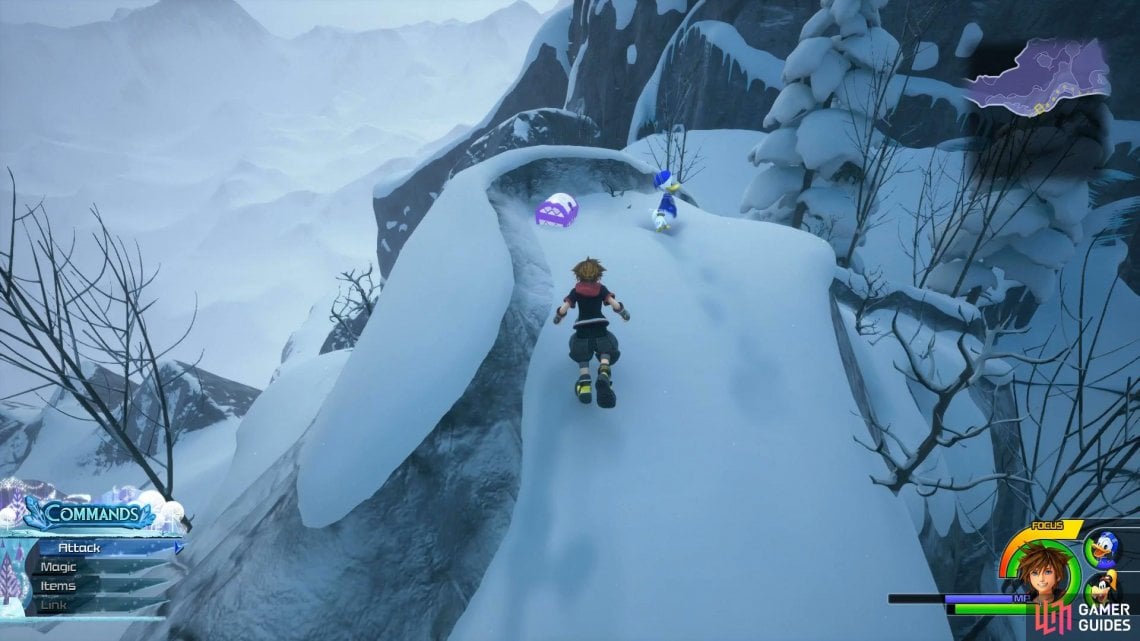 Climb the platform past the large wall.

When you run up the large wall that you can run up in the Frozen Wall, head diagonal right and drop on to a higher platform. Follow this platform up and over to the chest. 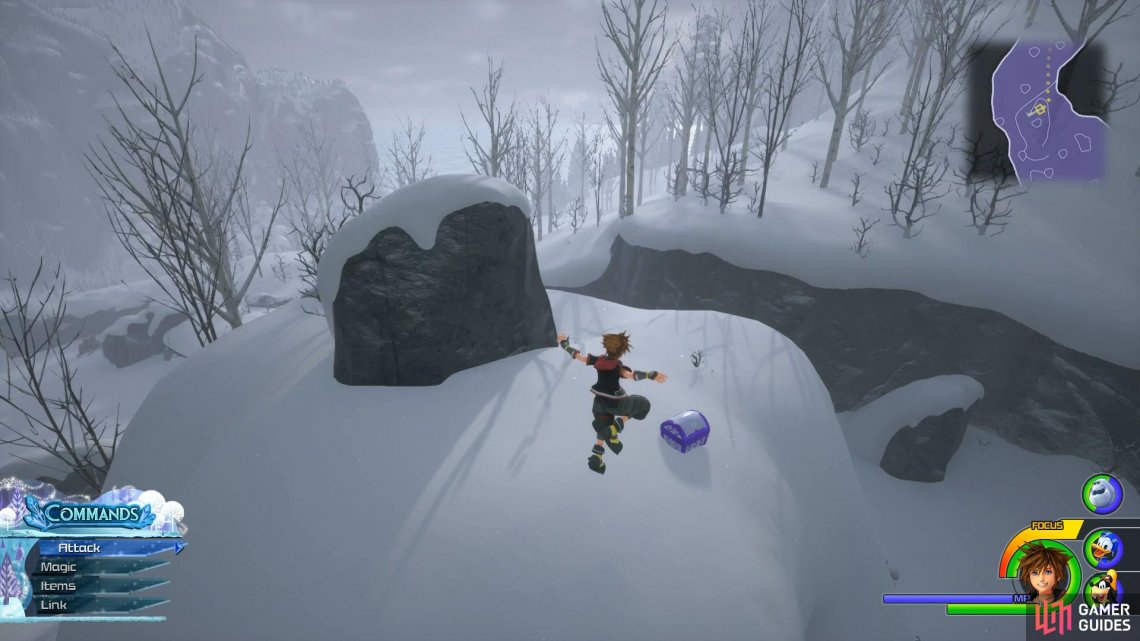 Climb the highest platform in the snow storm area.

Head to the Foothills Save Point and return to the area where you trudged through the snow storm. Leap up to the highest platform in the center to find this chest. 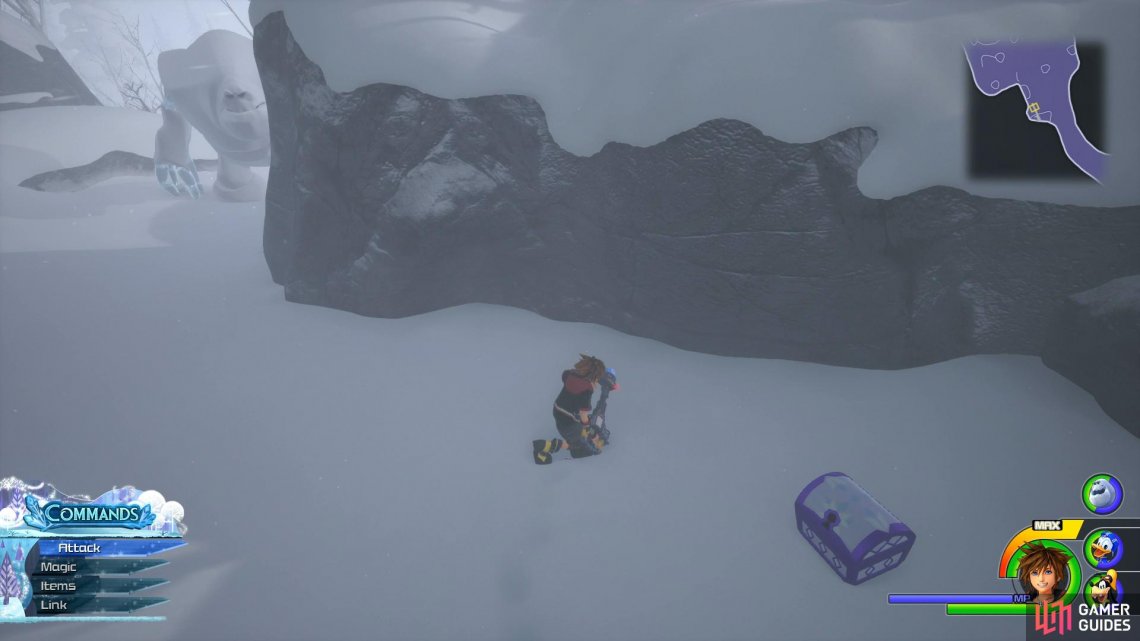 To the right of Marshmallow.