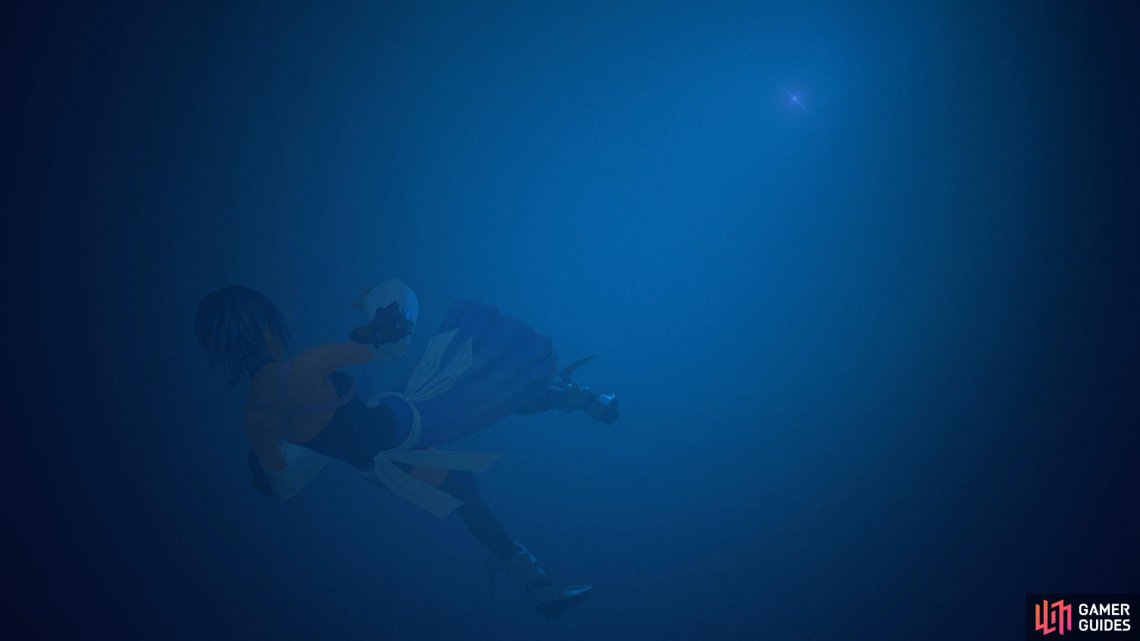 Upon completing the final Disney World, be it The Caribbean or San Fransokyo, return to the World Map to kick-start Kingdom Hearts III finale. From this point on, you’ll progress through a more linear path chock full of cutscenes and revelations. Riku and King Mickey are down in the Dark World and in dire trouble when matters take a turn for the worse. The lost Guardian of Light, Aqua, makes an appearance having now overcome by the Darkness.

Once again you’ll find yourself in control of Riku, squaring off against another Demon Tower. You’ll still have the magic Riku during the first battle against the Demon Tower but ignore it all, save for the Curaga spell. The Demon Tower hits a lot harder than your first battle with it and this time you’ll have Anti-Aqua making a nuisance of herself. Additionally, you’ll have a few items at your disposal, use these in an emergency if your MP is still recharging. 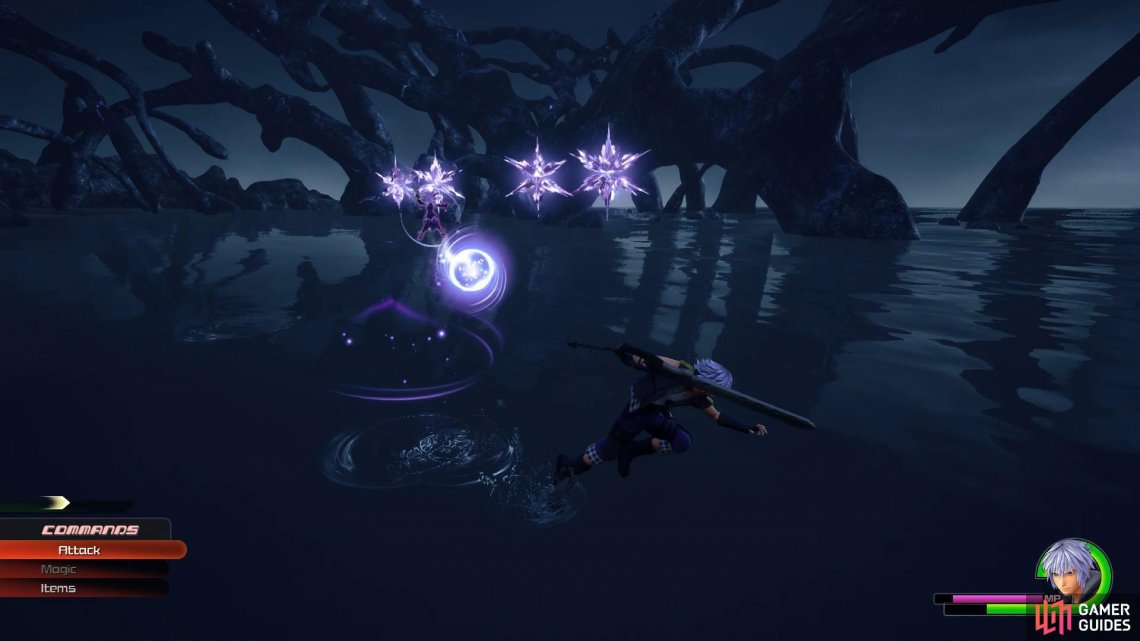 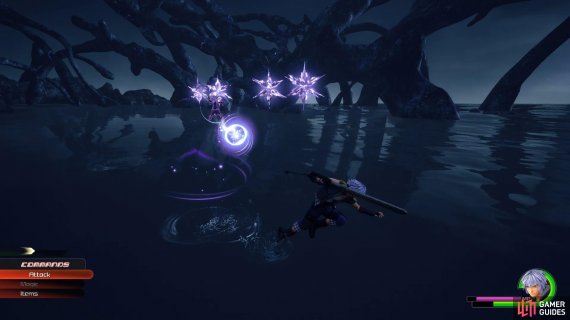 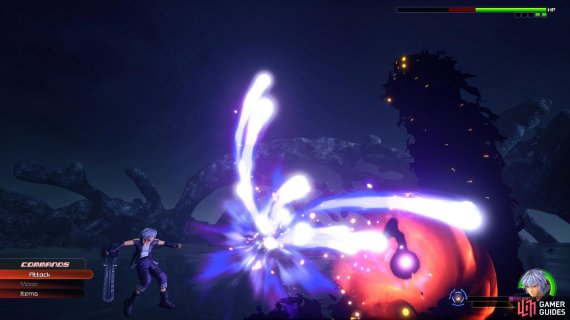 Avoiding Anti-Aqua is the main focus in this battle (left), unleash Dark Firaga as soon as it’s available. (right)

As for the battle itself, the Demon Tower possess all of the same attacks it had during your first battle with it. To make it clear, the Demon Tower is your enemy here, not Anti-Aqua so only focus on avoiding her lightning quick Keyblade strikes and turn your attention to the Demon Tower. Build your form gauge high enough and you’ll gain access to Dark Firaga, this spell will cause massive damage to the target so use it whenever it becomes available.

The main threat does however, come from Anti-Aqua, when the Demon Tower vanishes into the void. She’ll perform a serious of Ice based attacks and charge at you before sending the Crystals toward you. Keep on the move and Air Dodge out of the attacks while waiting for the Demon Tower to surface again. Once you deplete the Demon Tower’s HP to zero, the Situation Command Sora will appear, hit this immediately to bring the battle to a close. 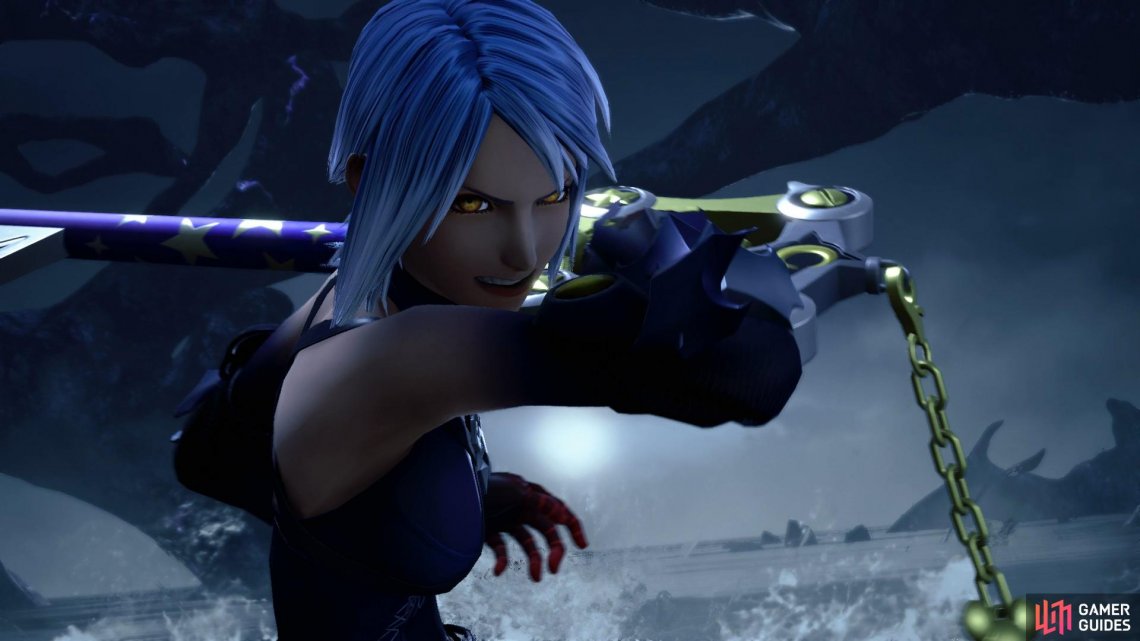 Now back in control of Sora, you’ll be up alone against Anti-Aqua herself in a grueling battle. Anti-Aqua is no slouch and by far your toughest encounter yet due to the pace and ferocity of her attacks. Like with the previous battle, keep your MP on standby for Cura, especially considering you don’t have Donald with you here to assist you in that department.

Anti-Aqua has many different attacks, ranging from a simple Keyblade combo that’s easy to dodge out of the way from and a Reflect Shield. She retains the attack over from the previous fight, where she’ll slash at multiple points and send the Crystals at your location, Air Dodge, like with Riku, is a must here to avoid this attack. She will also create many clones of herself, you can target these and dispatch them, if you have some MP left then a few casts of Thundaga may be useful here. They may not have much HP but they do hit equally as hard as their counterpart so you’ll want to at least take some of them out. 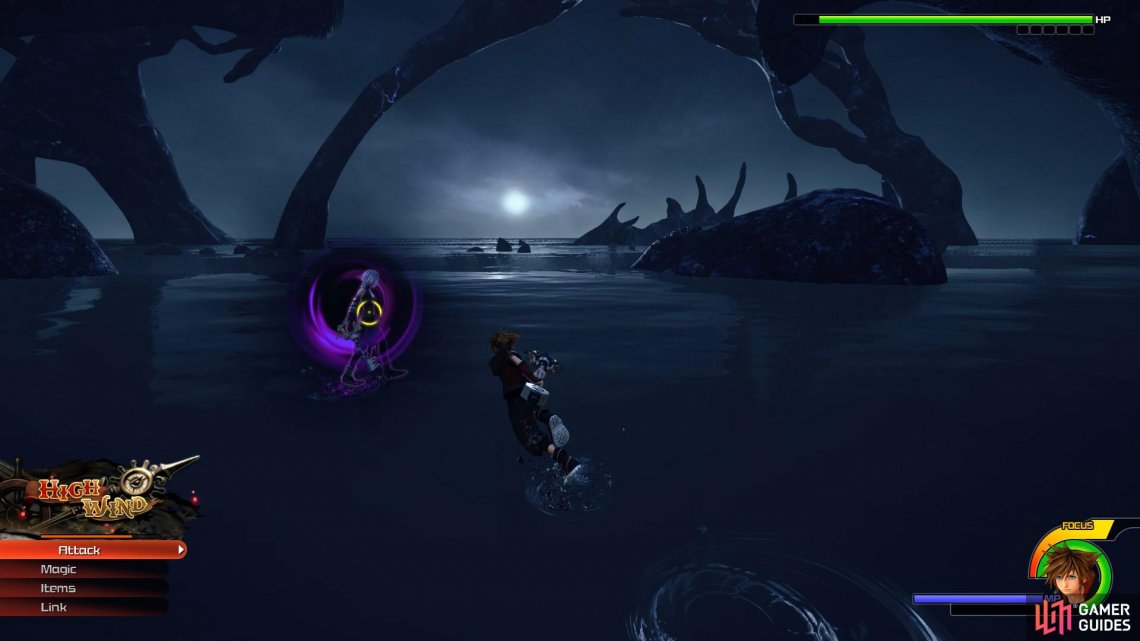 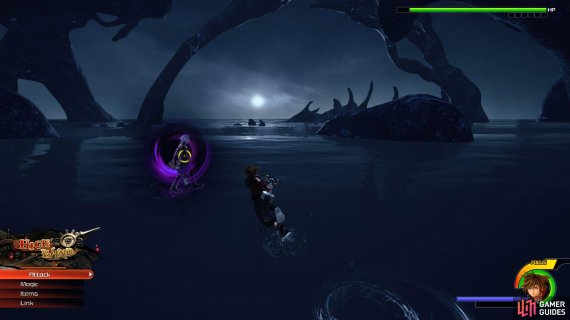 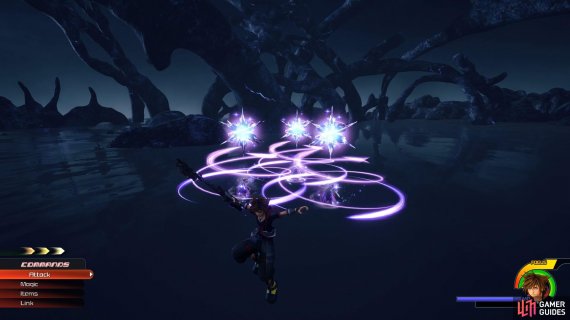 You’ll be able to lock on to the correct clone (left), Air Dodge out of the way when they come together. (right)

Finally, Anti-Aqua can vanish at will and reappear closer to you followed by launching projectiles at you. This is another easy attack to dodge and leaves her open to a Combo following it. You’ll need to be patient in this battle and wait for openings to hit Anti-Aqua, avoid striking her while she’s performing one of special attacks and counter. Her regular Keyblade strikes can be blocked, allowing you to counter with a reprisal and begin a Combo yourself.

A series of cutscenes will take place following the battle so grab some popcorn and enjoy the ride.

With Aqua in tow, she’ll reopen the lock on Castle Oblivion and return it to it’s rightful state, the Land of Departure. Save your game at the nearby Save Point and then follow the path up the stairs to trigger yet more cutscenes. 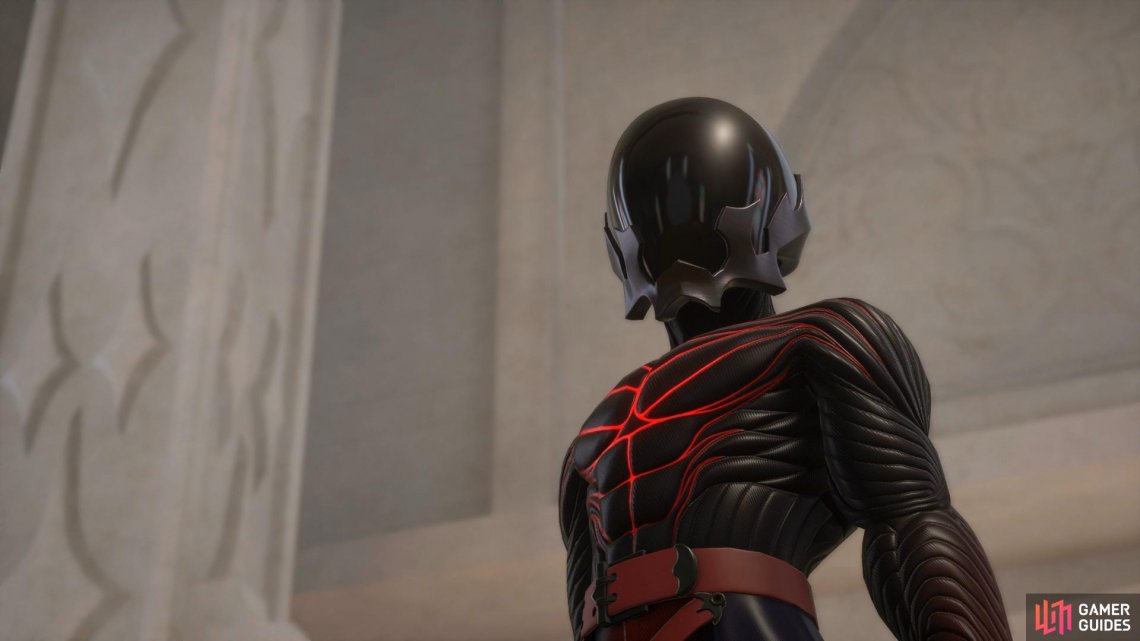 Another character swap, this time you’ll be in control of Keyblade Master Aqua. Her dodge is completely different to Sora’s so get a feel for it from the get go. Like with Riku, you’ll want to save her MP for casts of Curaga should you need it and note that you have a Hi-Potion and Ether assigned for emergencies.

Vanitas is very quick and he his Combos can be hard to get away from if you’re caught in the initial strike. He’ll cast Fire at you which will home in your location, if Vanitas is far enough away from you then block this attack rather than attempt to dodge it. Likewise, Vanitas will merge into the ground and appear under your location, immediately get away from the vicinity as a fire explosion will appear around the area and deal massive damage. Finally, be careful when Comboing Vanitas, he has the tendency to teleport above you and come crashing down with an Ice Blast. 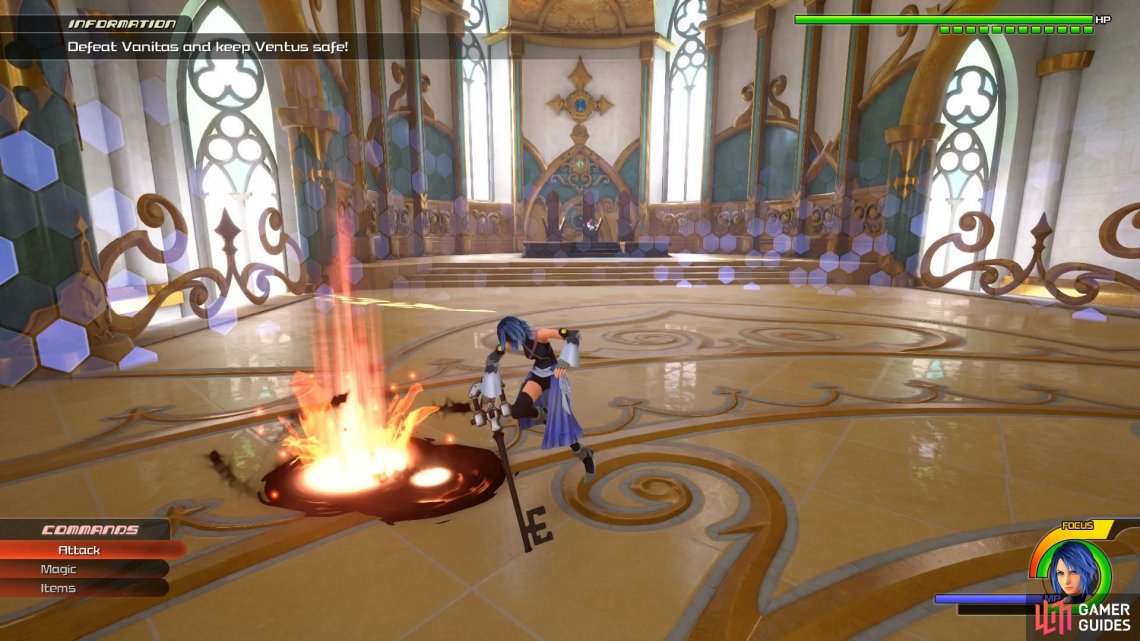 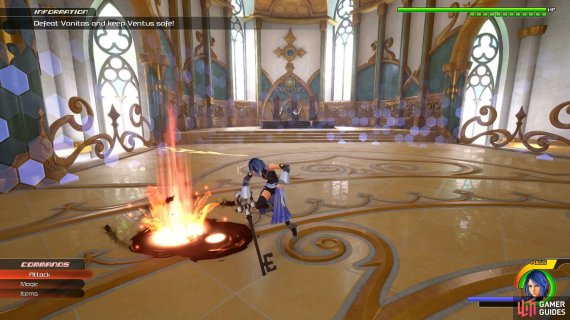 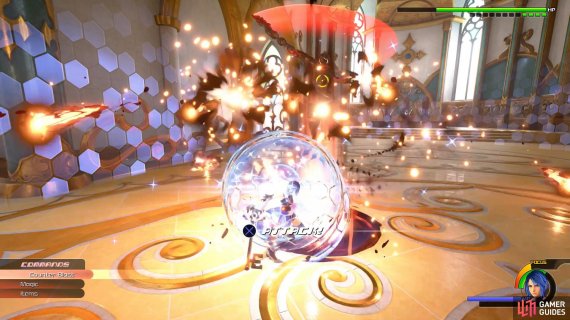 When you see the fire on the ground, dodge out of the way (left), opt to block the Fireballs rather than run away. (right)

Aqua’s Shotlock is incredibly powerful, make use of it if you can create enough of a distance from him. Your main course of action however should be to build up the formchange gauge to trigger Spellweaver. In this form, you’ll be able to string quick Combos together with a powerful finisher, once you find yourself in this, forego defense and go all out on the offensive.

Yet more scenes follow your victory and eventually you’ll regain control in the Gummiship, back on the World Map, the end is in sight.

The Hearts Joined to His

Gather the seven guardians of light.