The S-Ranking for this mission can actually be achieved quite easily as once you know what to do, there is actually very little needed in the way of sneaking and you can complete the level in under 5 minutes on both normal and hard difficulty without too much trouble. Following this guide, it is unlikely that you will kill any guards and if you are quick enough you will not put the guards into a combat status either which will provide bonus points, which along with a fast completion will ensure that you receive a very large score and usually an S-Rank in the process.

The following bonuses will be added to your score at the end of the level if you are able to meet the requirements as you move through the mission.

Note: Due to the load out for the hard difficulty, two methods for achieving the S-Rank have been given below. It should be noted that both methods will work on normal difficulty, but only the second method will work whilst playing on hard.

The normal ‘S Rank’ for this mission is actually laughably easy. To get it, we need to ignore the game’s prompts to meet with the undercover contact and instead ride in the truck we start the level in all the way to the admin building. We’ll wan to hop out of the truck just after it goes through the gate. If you stand with your back to the truck, look for the gap beneath a series of pipes at the end of the alley behind the bollards to your right. Crawl beneath the pipes and use the boxes ahead to climb over the fence in the distance. Upon dropping down the far side, note the ladder to your left.

Make sure no enemies in the immediate area are looking in your direction before climbing the ladder. Follow the catwalk to the end – ensuring that you stay crouched as you do or you are likely to be spotted by guards below both inside the admin area and on the helipads outside. Climb the ladder at the end of the catwalk up to the guard tower and peek in the doorway. Shoot the video camera on the wall here and then grab the cassette tape from the desk.

Hitting the video camera here will have put the guards on alert, so quickly exit the guard room, drop down the first ladder and hop over the railing of the catwalk on the right. You should land on a shelf behind the now parked truck. 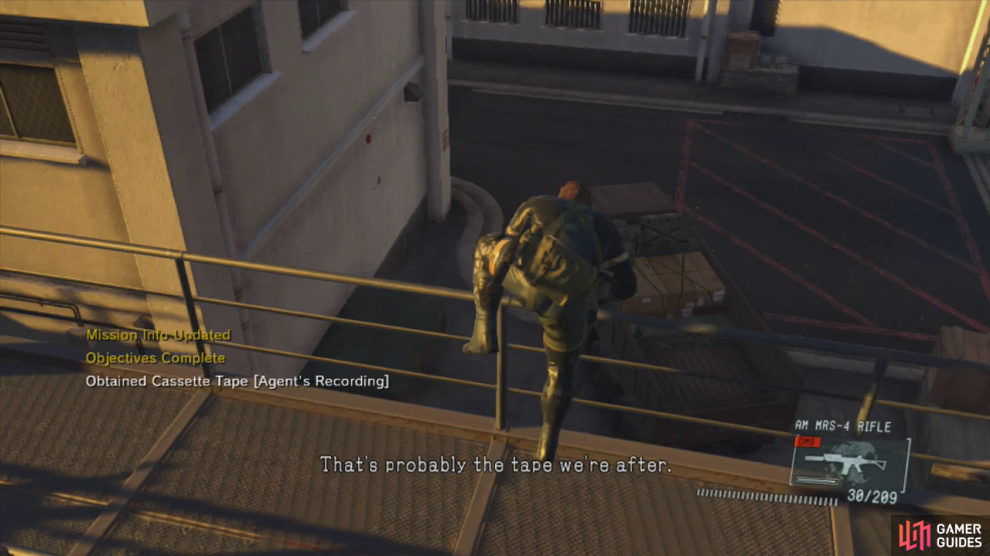 After grabbing the tape, simply hop over the fence and get back in the truck!

Jump into the tray at the back of the truck and go prone, you will not be detected here so we just need to wait for a few minutes until a guard shows up to drive you out of the base.

Easiest S-Rank ever? Quite possibly!

Getting an S Rank on the hard difficulty for this side-op is still fairly straightforward, but is certainly significantly more difficult than the method above. This is because unlike normal, you do not begin the mission with anything but a tranquiliser, and that won’t damage the video camera in the cassette room. As such, we’re going to go for the bald guy with the alternate cassette instead.

The easiest way to do this is to ride the truck at the start all the way through the base until it drives under the bridge to the east of the heliport. At this point, jump out the right hand side and sprint beside it, using it as moving cover from enemies in the guard tower on the heliport. When the truck turns to the left, quickly run up the hill and enter the armoured vehicle here. You will remain undetected in this vehicle, so follow after the truck. 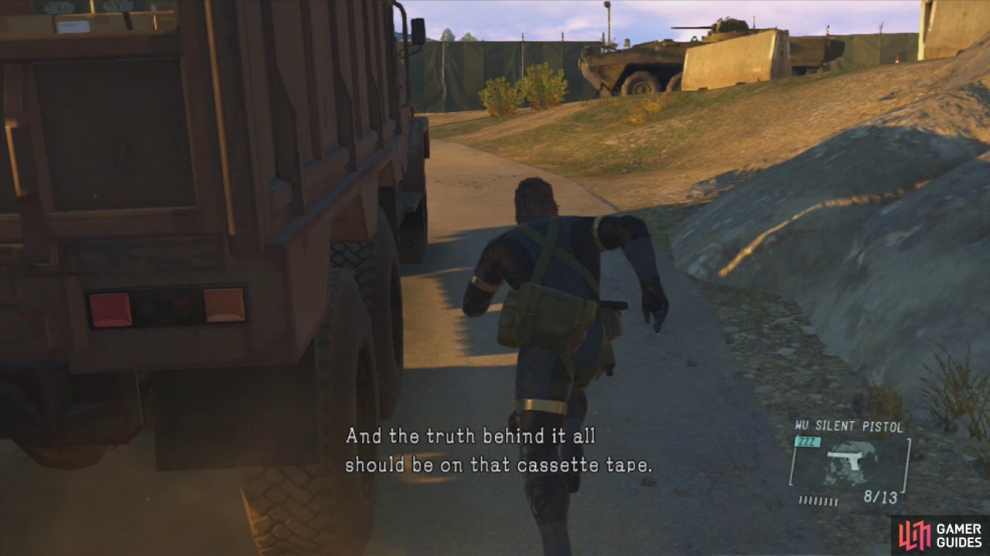 Hop out of the truck to the northeast side of the helipad and enter the tank up the hill to the right.

When the truck goes through the gate, you’ll want to reverse your vehicle so that the rear of the armour is sitting blocking the gate, with its back left touching the wall just beside the gate. The left hand side of your vehicle needs to be facing the orange door nearby. This is because Snake always hops out of armour to the left side and as such, he will not be detected if the vehicle is blocking the view from the heliport. Plus parking here also has the vehicle in position for a quick getaway!

Observe the truck driver and wait for him to start patrolling further into the admin building before you hop out of the vehicle to the left side. The armour will have created a massive piece of cover that will hide your movements from both inside the gate and from the rest of the heliport.

As you move up to the orange door, do so at an angle so that you can peek through the bars at eye height into the next area. There is a guard in here and he might see you if you come straight at the door. When it is safe to do so, sneak on in and take him down. 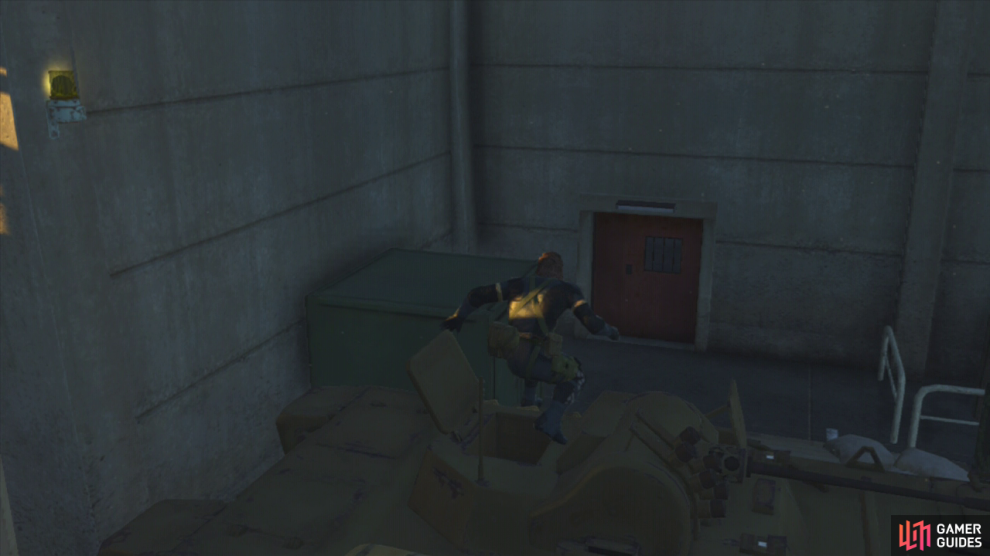 Park the tank so that you can use it as cover to enter the admin area undetected.

Proceed down the stairs on the far side of the area and enter cover to the side of the door leading to the boiler room on your right. Baldy is in here, staring at the northern wall of the room. Wait for an opportunity, then sneak in and grab him. Interrogate him so that he drops the tape and then knock him out.

Grab the cassette and run back to your armoured vehicle. Now drive it to the south east of the heliport, across the bridge and through the checkpoint here to complete the mission.