As you begin, you’ll be attempting to locate the operative. Simply shoot at any enemies you see below if you wish to do so. The pilot will cut a loop around the execution ground and then proceed to the east. As you go past the guard tower, watch out for the RPG on the building directly in front of you. Again focus on enemies on the ground if you wish as you fly to the next objective.

You’ll soon arrive at the prison area. Here we’ll see the operative on foot. We need to protect him. First knock out the RPG located halfway up the hill ahead and then focus on the three guards on foot who are firing at our buddy. After a short breather, look over to your right and you’ll see some additional forces running down the hill. Pop the RPG and the other foot soldier and then when the jeep appears tranquilise the driver, or hit the barrel to destroy it depending on how you are playing. 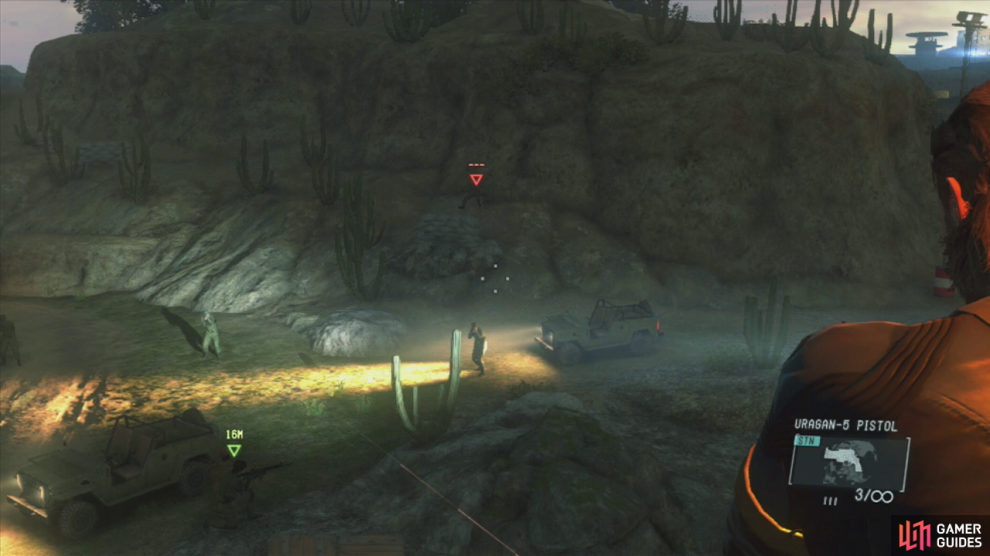 Protect the contact! Be sure to eliminate the RPG gunner first!

Once the area is clear, the operative will hop in another jeep and take off. Now you need to follow after him and keep him covered. Note that during the next sequence that whilst you can still shoot enemies on the ground, it is much more important to focus on shooting the drivers out of the vehicles that chase him as well as any RPG soldiers you find en route.

After dispatching the first chase vehicle, our friend will be cut off by a truck, shoot the driver. He’ll then reverse and drive by a guard tower. There is an RPG gunner on the ground next to the building behind this. Be sure to shoot him. A second chase vehicle will then show up to harry our target. Focus on eliminating the driver. As the friendly drives by the anti-aircraft gun, there will be another RPG gunner beside it. Take him out as well and then the third chase vehicle which appears soon after. 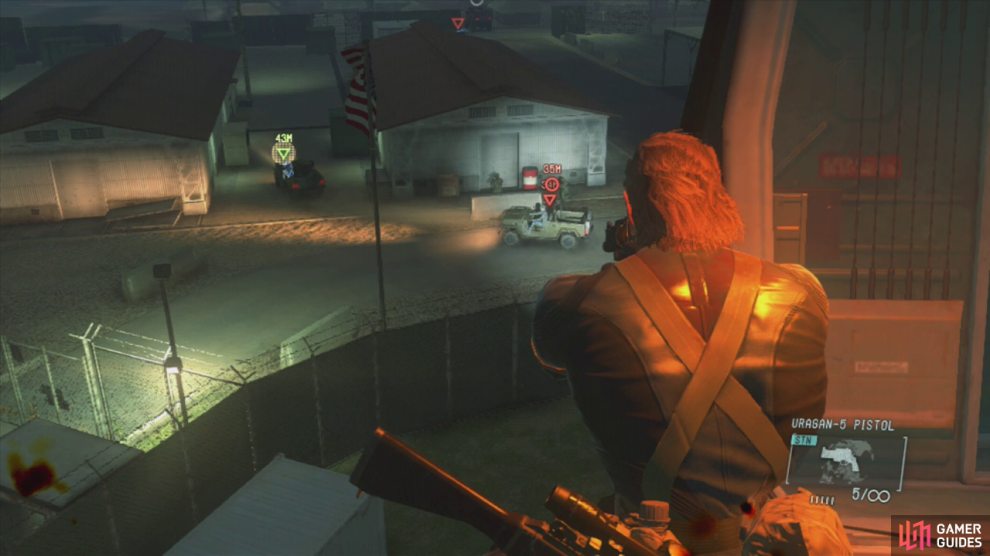 Prioritise the RPG gunners and the drivers of enemy vehicles.

Take out the guard on the Anti-Air gun as the contact’s vehicle enters the helipad area. Our pal will now come to a stop near the building on the eastern side of the heliport. At this point, you’ll have the chopper moving around into various positions around the helipads as enemies appear so that you can neutralise them before they can reach the target (watch out for the RPG in the large control tower over the admin building). After a few location changes and once the helipad is clear of hostiles the helicopter will descend and allow you to hop out.

As soon as you get out of the helicopter, you’ll want to sprint over to our target. Grab the RPG that is leaning up against the wall behind him and then pick up the contact and carry him around to the back of the building. Whilst you were doing that a manned armoured vehicle will have appeared.

The vehicle will approach and attack you with its machine gun. We’ll need to take it down with our RPG. Note that if you have neutralised the guards previously without killing anyone, you will need to kite the vehicle away from their position or the splash damage from the rockets will kill them. To do this, run back around the front of the building and use the various crates scattered about as cover when you need to reload and then hit it with a rocket when you see an opening. Three hits with from the RPG should be enough to destroy it. 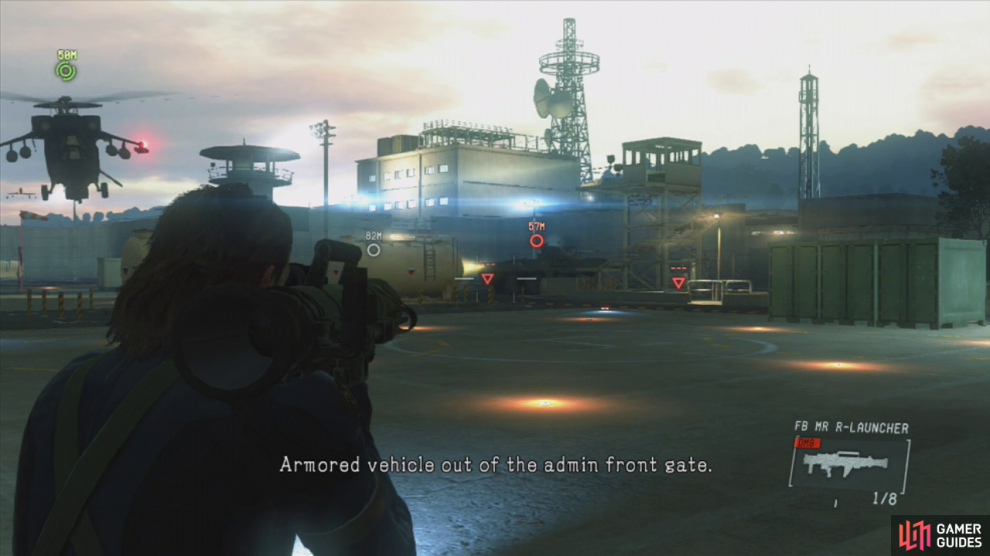 The armoured vehicle will appear in the centre of the heliport.

Once the tank is destroyed, we’ll then have to deal with another three infantry soldiers who will approach from the west. Switch back to your stun revolver to attack them. Once all three of them are neutralised, your helicopter will descend once more, allowing you to extract our friend and get on board.

It’s not over yet though! As you fly away an enemy helicopter will appear. If you are going for the zero kill achievement/trophy you will need to use your stun revolver to shoot the guard who is firing at you from its open door. If you care not for the achievement/trophy or the ‘S’ Rank, simply pull out your RPG and hit the hostile chopper three times to take it out. This will end the mission. 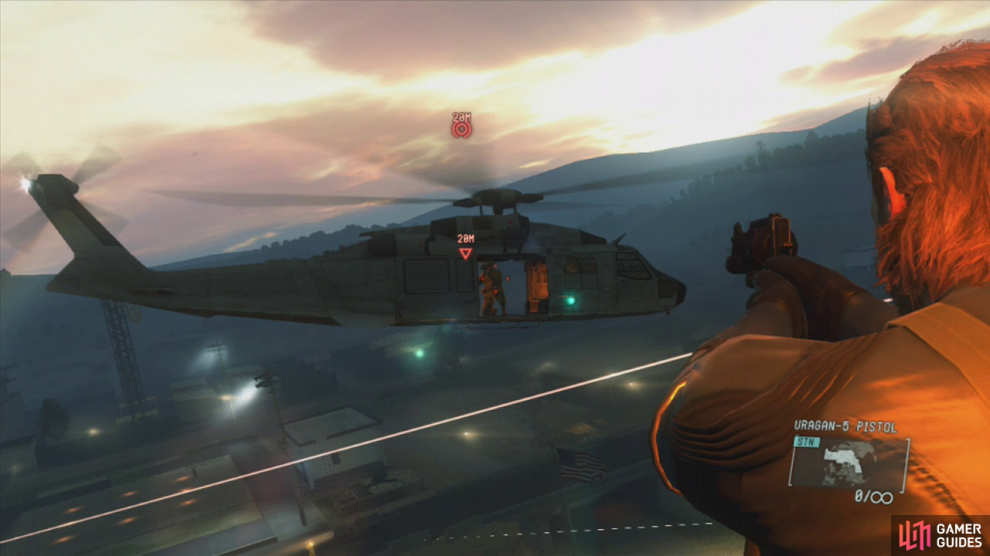 Pop the guard in the enemy chopper to end the mission.

Note: For completing the mission without killing anyone, you will earn the achievement/trophy ‘Pacifist’. Completing the misison will also give you another collectible tape [Chico’s Tape 1] .