Thanks to the sandbox nature of the mission area, there are always multiple ways to approach any objective. To cater for this, Snake has a good range of movement options at his disposal to help him get around Camp Omega sneakily, with some definitely being better than others. These include:

Walking/Running – Snake’s standard movement mode. The more you tilt the movement control stick in a direction, the faster Snake will move. The Running/Walking stance will have Snake move around quicker than other methods of travel, but it trades off being more easily noticed from a distance for speed. Clicking in the movement stick as you go will cause Snake to break into a sprint. Use this for quickly evading spotlights or enemy patrols.

Outside of those situations, if you care about stealth, you’ll want to ensure that there are no enemies about before using this too much. Running also enables you to perform a dive by hitting (‘X’ or ‘Square’), helping you get into cover a little quicker or dive out of line of sight when need be. On the hard difficulty you will want to use this very sparingly due to the decreased enemy reaction times.

Crouching – Crouching should be your best friend in Ground Zeroes. As with the running, the more you hold the direction stick in, the faster snake will go. Crouch walking is definitely slower than regular walking, but still allows you to get around at a decent speed, albiet more silently. Crouching also allows you to enter cover behind environmental objects and hide in bushes scattered around the base to conceal your position from patrolling enemies. As it is so quiet, this movement mode will allow you to sneak up on enemies undetected.

Whilst you are less likely to be detected from a distance whilst crouch walking when compared to walking, it is still less effective than crawling for remaining undetected.

Crawling – Crawling is the slowest, but quietest of the movement types and allows snake to hide in grass, behind cover and sneak up on enemies like crouching does. It also gives Snake the ability to access and manoeuvre through small access vents (for a couple of sneaky shortcuts) and crawl beneath environmental objects such as raised buildings and trucks, to stay out of the sight of guards.

Climbing – Much of the environment in Ground Zeroes is scalable. In addition to ladders, players can jump over fences, pull themselves up onto rooves to approach areas from above or track enemy movements and hop up into and hide in the back of trucks. To perform a climb, players must approach an object of choice, as they do an icon will appear with an arrow to indicate a climbable surface. Press the interact button (‘Y’ or ‘Triangle’)to execute the climb.

Driving Vehicles - There are three types of drivable vehicles located around Camp Omega and these will allow snake to traverse the length of the map in a very short amount of time but again trade off stealth in favour of speed. Of the three types, the cargo trucks and the jeeps will have Snake completely visible whilst you are driving, so whilst they are a quick way to escape an area, using them will more than likely lead to triggering a combat status. If you can hijack an armoured vehicle without being spotted, it can driven around without Snake being detected (unless you do something hostile to guards). Unfortunately, outside one or two circumstances, these are almost always occupied. 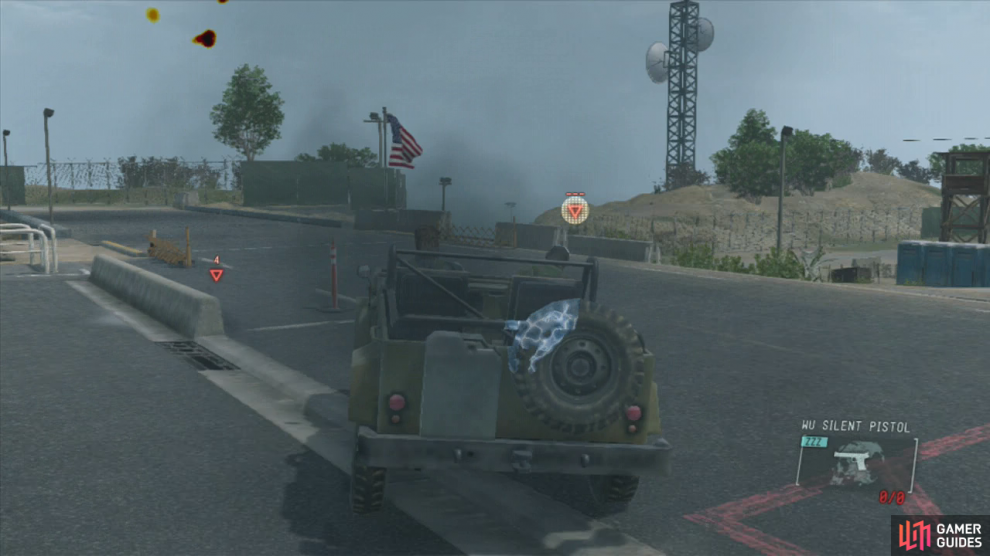 Vehicles are a fast, but unsubtle way to make a quick escape.