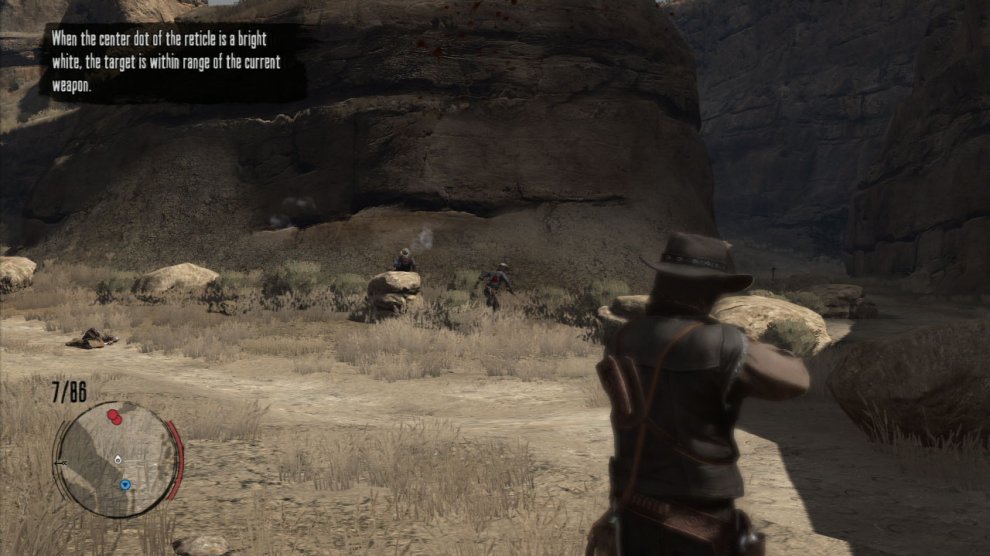 Set your waypoint back on the 'M' in Armadillo and either campfire teleport to it, or ride there on your horse if you want to enjoy the scenery. When you approach the jail, the next mission will start in earnest.

As soon as the humorous cut-scene is finished you’ll follow the Marshal and his cohorts into the wilderness to your next destination up north. When you get there, you’ll be asked to dismount and go the rest of the distance on foot.

Follow the Marshal up the hill and around the cliff edge towards the camp site. Watch out for the red dots that appear on your radar as these are your enemies! Take cover and look in the general direction of where the dots are to spot them.

Take each of them out one at a time from behind cover before moving onwards. You should soon reach a bunch of Bollard Gang members hanging around near where the camp site is. Sneak up on them by pressing down your left stick and use this opportunity to get a headshot on one of them before all hell breaks loose.

Wipe them all out quickly, loot the site below (one of the chests should hold a free pardon letter in it), then join back up with the marshal and his deputies. Take out the snipers at the bridges further on up (keep an eye for red dots at all times to get an idea where they might be).

You’ll eventually sneak up towards their main base (along with hostages and livestock), so line up a shot on some TNT by the tents and that should wipe a few of the gang out with minimal hassle. Now stay in cover, and eradicate the rest of Bollard’s troops, before approaching the hostages to end the mission.