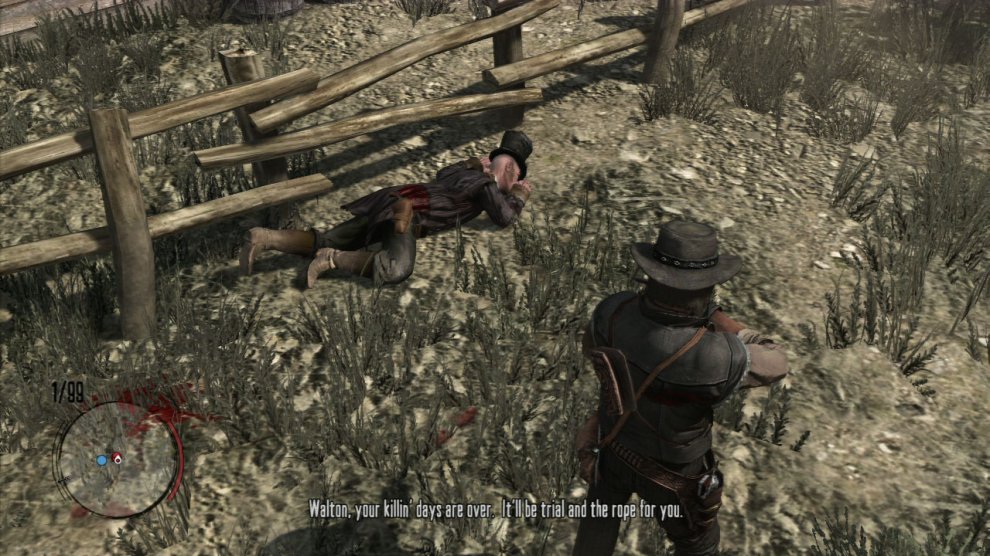 If you're not already in the town of Armadillo, you'll want to set a waypoint for it, and then use a campfire to fast travel to the town (saving you a chunk of time). Once you're in the town, head for the yellow cross by the sheriff's office to start the first of his missions.

To help build up your relationship with the marshal, follow him into the local saloon, where a cut-scene will trigger and you'll find yourself riding with Marshal Jonson. Stick alongside the sheriff and dismount when instructed to.

Get your most powerful gun at the ready for a wild west showdown! Use the conveniently placed cover to hide behind as you use the small white dot on the screen to line up your shots before you pop out of cover (by pressing the aim button) and letting rip.

You can still move whilst pressed up against cover (use RB/R1 to get into cover) and use this to your advantage if you need a better shot. Keep pressing onwards until your final target appears where you have a decision to make.

You can either outright kill him (still completing the mission), or, you can either 1). Use Dead Eye mode to aim at his leg to cripple him, or 2). If you've done all of Bonnie's missions before this one, you can lasso your target up and wrap him up for the Marshal.

Doing either will earn you a nice cash reward for your troubles. Not pick up any dropped weapons, raid the chest in the house and loot the bodies for some extra cold, hard cash.