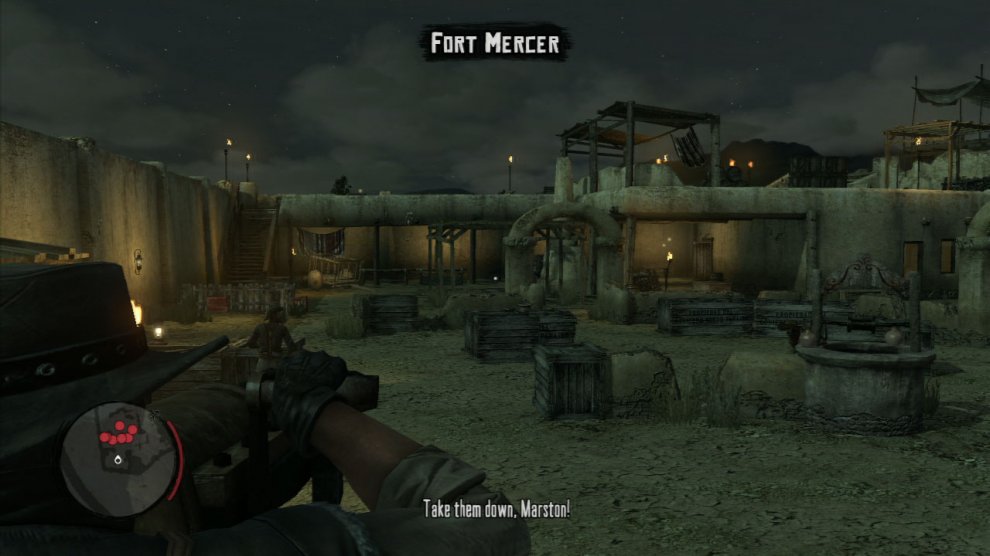 Once the missions above have been completed, the final mission in this area will appear on your map by Fort Mercer (but only between the in-game times of 2pm and 10pm). This is the culmination of what you've been trying to achieve from the outset. Everyone you've helped up to now will pull together to help you get Bill Williamson.

Once you've climbed into the stagecoach with the machine gun, you'll be taken into the fort. The next time you regain control of John you'll have to hold down fire and take out every bandit inside! Keep a tab on the red dots to indicate how many enemies are left and when the initial batch are taken care of, keep your gun trained on the doorways to your right.

From here reinforcements will show up, so be ready to take them down as well. Once they're disposed of, you'll need to follow the marshal up the stairs at the back and use the cover up here to outgun the remaining enemies.

Keep your eyes peeled for TNT crates that have been conveniently left lying around the place as they can help you score some easier kills. When you kill them all, you'll reappear back on the machine gun, where you'll need to watch out for those red blips again...

There's also more TNT littered around outside, so don't be afraid to shoot these to make your life somewhat easier. Take out the wagons, horses and loners and when you kill them all, play the cut-scene out, loot the bodies lying around for ammo and money before joining Irish on the next leg of your adventure.