Great Men Are Not Always Wise 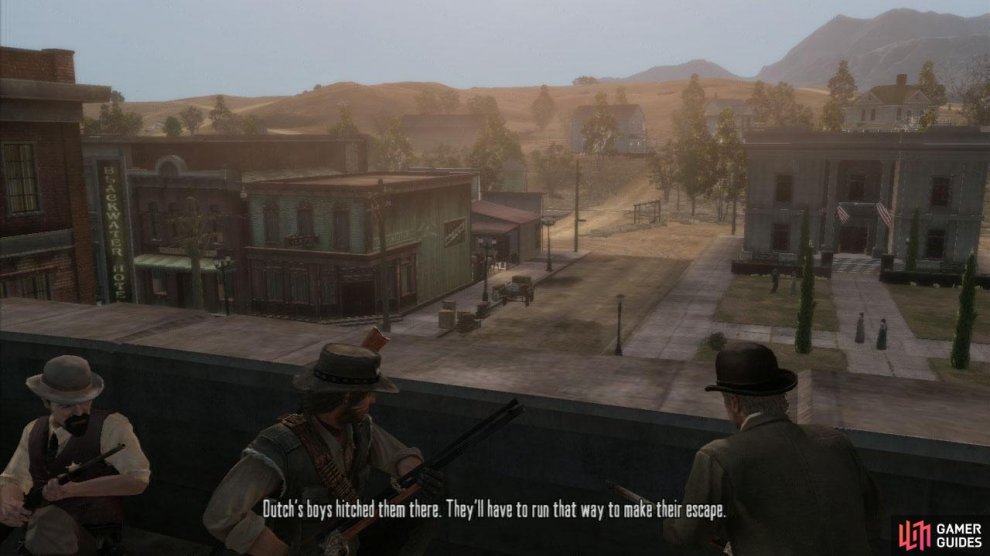 Once you’ve headed up onto the roof, get your sniper rifle out and when instructed to, start shooting at the Indians that come out the front door. They’ll either head left or right and away from the bank. They’re easy enough to hit (and watch out for the gunmen in the windows too).

Once they’re all taken care of, you’ll have to run up to the bank’s doors and shoot them open. Watch out for the men behind the counter to both your left and your right as they can very easily take you out if you’re not quick. So run up to the wooden panel in front of you and pick them off until one remains.

This one is holding a hostage and if you try and walk around he may shoot her, so use Dead Eye through the bars - at an angle - when he shows his head to take him out.

When you head upstairs, immediately duck behind the wooden lectern and lock onto the three Indians hiding behind desks, now head to the yellow cross to start a cut-scene that leads to the next part of the mission.

After running downstairs and outside again, jump onto your horse and follow the blue dot. You’ll arrive at a forest where you need to fight and take out a large number of enemies. So get your rifle at the ready and take cover on the higher ground on the right-hand side.

Move from cover to cover as you snipe the Indians that are strewn across the forest and they’re all carrying heavy duty weapons, so be careful and if you’re taking fire, duck down! When you reach the mid-way point up the hill, switch to the left-hand side and you can easy flank the remainder enemies who’ll all focus their attention on the guards to the right.

When the mission is over, watch out for any annoying wolves that have a tendency to appear and try and bite you to death.