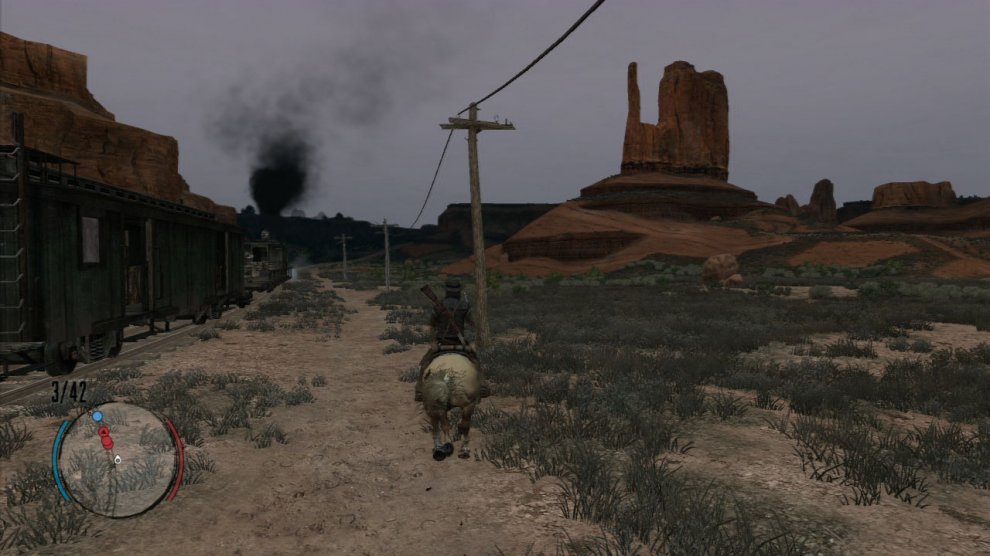 Teleport or ride to the 'R' on the map and you'll start the next mission in the game. After the cut-scene is over, ride shotgun with Reyes in his wagon that's backed to the hilt with explosives!

Abraham's no idiot as he persuades you to drive the - lit - explosives filled wagon right up to the front gates of the fort! You need to press Y/Triangle to jump off the wagon when prompted to on the screen. If you jump too early or too late, you'll auto-fail the mission.

Once the gate is blown open, scarper to cover and let the revolution men through first. Equip your best rifle and get inside behind some cover. Three question marks will appear on the map, two of them indicate towers, whilst the third one (the barracks) doesn't and this is where Escuella is always found hiding.

After a cut-scene Escuella will make a run for it into the desert on his horse! Call your horse when you get back outside the gates and chase after him! You now need to decide whether you wish to gun the traitor down, or lasso him and take him alive.

Whatever choice to decide you ultimately need to take his body back on your horse and dump it in the cells in the fort. Reinforcements are on their way, so jump up onto the tower covering the front gates and man the huge back cannon.

The cannon balls have a huge explosive arc so they'll easily take out the groups of horses and wagons that attempt to pull up to the fort (especially if you fire the balls into the middle of any groups). Put Escuella back onto your horse and take him to the two FBI agents that are located on your map (by the bridge that connects with America). Mission completed!