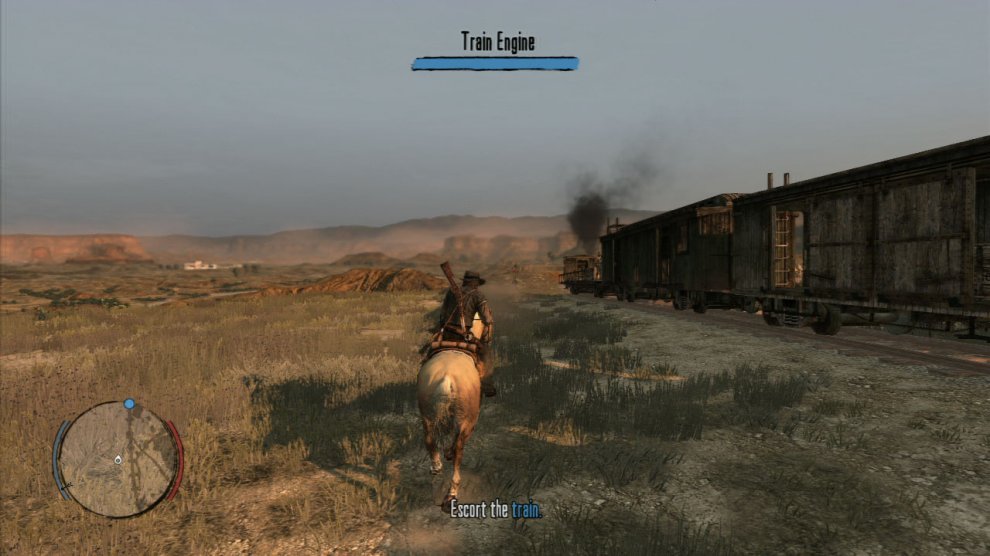 Now you need to do some work for the revolution leader Reyes, so campfire warp or saddle up and ride to the 'R' in the northern part of Mexico. Ride with Reyes to the familiar town of Chuparosa and you'll be given some throwing knives, allowing you to kill enemies silently!

Wait as instructed until Reyes distracts the two guards near the train and sneak around the left-hand side of the building where a guard will be standing with his back to you. Equip your knife and line it up before throwing it in his back.

Now hang a right into the building beside you and there's two guards on the train with both their backs to you. Kill the left-most guard first, then the one on the right, sneak outside and look left for one final guard who's looking the wrong way. Slot a knife in him too and then jump onto the train itself.

Immediately look up and right onto the roof of the building that you've just came from as there's a guard with his back to you beside a rather dangerous machine gun. Get a knife in him too, then look left for a guard sitting on a box with his back to you.

Knife him, and move up slowly whilst crouched so not to alert them. Once they're all disposed of, head up past the Gatling gun and unhook the carriages apart. Now immediately jump onto the gun and start laying into the troops in the campsite nearby.

More troops will try and run up from the right, so mow them all down to make light work of them. jump off the train, and use the camp's Gatling gun to kill all the guards that are left on the train. Now race over towards the train engine itself and pull the brake lever when you reach the engine car.

This will make the train stop, allowing you to climb to the top and plant some dynamite on the roof. Run away quickly and wait for it to detonate, get back on the roof and drop down into the room below.

This'll trigger a new mini-game involving cracking the safe, so if you've already been mucking around in the game and cracked a safe or two, you'll already know what to do. For those of you new to it, here's what you need to do.

Move the left-stick right to rotate the dial clockwise slowly until you feel your pad vibrate and/or see the lock icon shake about. You're near the correct number and once the lock icon opens up, you now need to turn the left stick counter-clockwise to find the second number. Again, wait for the shaking to occur to signify you're close. Once it's found, rotate the stick slowly right one final time until you find the third and final number.

This'll unlock the safe and inside will be $200 and a pardon letter to use whenever you wish later on! Leave the armoured car and once you reach the blue dot the mission will end.