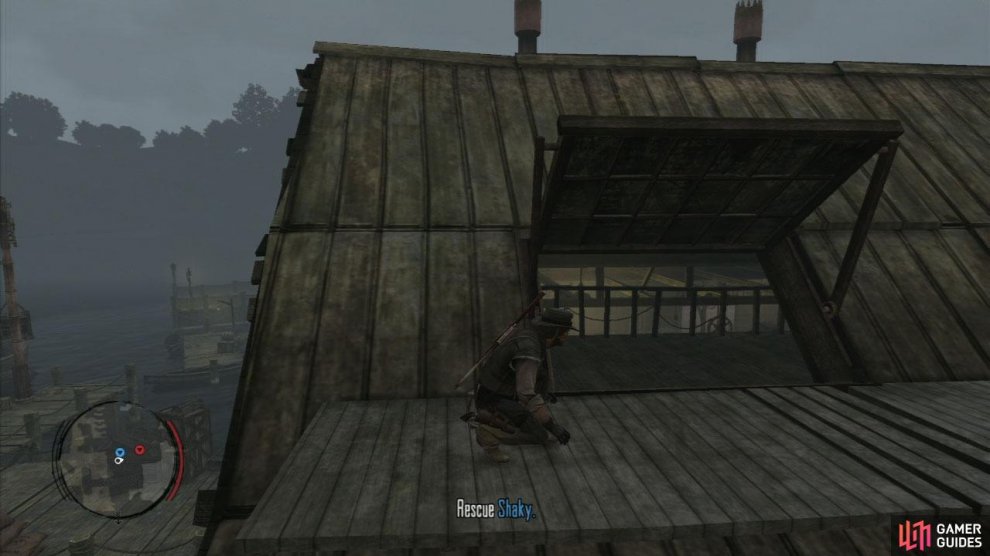 You'll probably want to use a campfire to warp to thieves landing (all the way up in the NE corner of the map) as it'd take ages to get there on horse. Meet up with Irish and then follow him to the warehouse where the gun ammo is supposed to be.

You'll head around the back of the warehouse and you'll eventually need to climb up onto the roof at the point marked by a yellow dot on your map. Crouch once you're on the roof until you enter the open window at the end.

Fight your way to the main office, where after using a nifty spot of Dead Eye on the three guards in here, you'll free Irish's mate (and loot the footlocker in here for a nice stash of cash before you exit the room). An ambush will now show up below you, so sneak out and clear the warehouse of enemies before proceeding outside to find the ammo you came for.

There's a ton of cover in the yard outside, so take full advantage of it and run from cover to cover, shooting the hell out of anyone who sticks their head out to look for you. When they're all disposed of, you'll meet up with Irish and make your escape on a horse and cart.

Of course, the thieves won't take it lying down, so you'll need to equip your rifle and take them out as they approach from behind. Watch out for a sniper up high on the bridge, so be ready to swing round and take him out. Once they're all dead you'll finish the mission, and be one step closer to getting Bill Williamson!