Sadly, Claire’s episode 4 was already an Invisible Run as there’s only 6 Glasps in the Tower… BUT they threw in ONE more Glasp in here. At the very start don’t flip the switch. We don’t want to mess with the sluices in Barry’s episode. You get pretty much the same items, so use the shortest route.

If you’re rushing through the episode, you’ll most probably get killed. When you get outside proceed through the area until you reach the small alcove where you have to move the iron crate to get past the fence.

THIS is where the Glasp was added. There’s also a crate here that will most likely get you a SMOKESCREEN BOTTLE , so that’s good. Besides that, the rest of the episode is the same so hurry up and finish so we can tackle the final one!

Since you’ll be fighting Alex at the end of the episode, you’ll be wanting a lot of Bottles (Firebomb, Exploding and Decoy in that order), grab all the Bottles and Empty Bottles and don’t use them at all. Also make sure to grab the Ingredients for the Bottles.

Time to start this bad boy. Start by opening up the trailer near the entrance, getting the stuff inside and cross the bridge. Ignore the enemies around the ladder, go down and get up the next ledge. Make sure to open up the trailer to get a RED HERB and break a crate. Proceed through the crane area, make sure to grab the EXPLODING BOTTLE from the top of the crane (on top of switch #1) and go to the room on top of the crane. Start knifing at the window where the Rotten comes out from, jump through, switch your semi-automatic Rifle for the bolt-action Rifle if so desired (recommended because of the higher Attack Power) and proceed to the next area.

Loot this whole area, grab the EXPLODING BOTTLE from on top of the elevator shaft, grab the EMPTY BOTTLE right outside the elevator and proceed down it. On the bottom, make sure to get the Map for the area and start moving through the gas. In the area where the Rotten are waiting for you (when you need to flip the switch), evade through them and don’t fight. Once you flip the switch do the same to get through them until you reach the next area.

Heal Barry if needed and it’ll be time to get the Key and clean the area of the gas. Start by heading into the room where you get the key. Wait for the Revenant to come towards you and move left so you can get down here and stealth kill it. Return to the entrance, shoot the blob-throwing enemy with your Handgun to make it appear and shoot the orb with your sniper rifle. Have Natalia go through the hole and lure the Revenant towards the entrance to kill it.

Now do your thing with the crate, get the key and get to the second area. As you drop down get on top of the central safe area and you can knife all the Rotten to death. You will be hit a couple times, or you can spend a couple rounds to headshoot them all, or at least most of them. Stealth kill the Revenant further in and proceed to the area with the Dhurlga.

Have Barry stay at the entrance and start moving towards the switch at the end. Lure Dhurlga to attack you, evade it and move past it. Run towards the switch, flip it, grab the RED HERB , break the crate and switch to Barry. Call Natalia to you and keep “O” pressed until Natalia has at least 30m. Now leave the room. No shots were fired and hopefully no one was hurt either.

Return to the central safe area and evade through the Rotten behind the door into the main area where you’ll flip the switch and you know what happens after this. Once in the mansion, stealth kill the Revenant on the path to the left, grab the ALCOHOL in the bathroom and the other Revenant you can run past him until you reach the room with all the tubed Revenants. If you want to kill it that’s up to you.

Head over to the workbench and grab the Security Key Card 1, return to the tubed Revenants, kill the Glasp and grab the Emblem Key from the morgue. When you return to the tubed Revenants a Glasp breaks loose a Revenant. Run past them and go get Security Key Card 2 from the first floor, then return and enter the contaminated area. Loot the area and jump down, then loot the whole area again.

The most difficult area of the game, obviously. Like always, take out all 3 tubed Revenants before activating the switch. IF you have any Empty Bottles to spare create 2 Smokescreen Bottles to help against the Glasps. There’s a blob-throwing enemy that comes from the front of the elevator. Shoot it with the handgun and snipe its “eyeball” down.

Afterwards there will be a couple Revenants come from the right side and a Glasp on the left side. Focus on the Revenants first, but don’t forget about the Glasp. What’s new to this area is another blob-throwing enemy that falls near the Glasp so be careful and take it out like always. After that a Glasp falls to the right of the tubes, a Revenant, a blob-throwing enemy and a Dhurlga appears from the puddle on the upper right. Take out the Revenant ASAP, then the blob guy and lastly the Dhurlga.

Dhurlga is really tough, like always, so use all your rifle ammo if needed as this will be the last fight before Alex. Try not destroying its tentacles so it can remain slow. Other than that, give it all you’ve got. Now proceed through the tunnel while recollecting all items. Now onto the battle against Alex.

This fight can be really easy. I hope you did what I told you to do and save up all your bottles. I had 4 Firebombs, 5 Explosive and 2 Decoy Bottles. Start by tossing a Firebomb to stun her and toss them over and over. This will almost kill her. Now, while Natalia is pointing at her, empty all your guns on her. Everything you’ve got. It doesn’t really matter if you hit her weak spot or not. Just hit her over and over.

IF you run out of ammo, have her break the shelves around the place to get some more ammo. Note that there’s also an Alcohol in the area as well as a Bottle so you can make another Firebomb Bottle. As for the next battle, is really easy as well. Don’t lose her. Even if you’re reloading, follow her. A good tip is that the helicopter is usually following her with the spotlight as well so use that as a reference.

When you’re controlling Barry, don’t even bother gathering anything or trying to damage her. Heal as soon as you gain control with him if you need to and exit the cave. Shoot the SVD as fast as possible until you have to use the RPG, in which you have to hit her twice in order to give this episode an ending.

"There's Something in Here" 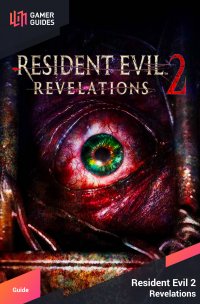