Combat plays a significant role in V Rising, and to aid you in that endeavour are the plethora of weapons that you can craft, all with their own playstyles and skills. This page will give you an overview of all of the weapon types and the best ones in V Rising.

V Rising is well versed in combat, be it PvP or PvE and each of the weapon types all have their own playstyle suited for all of your needs. It’s highly recommended to take the time to craft at least one of every type up to Iron as you’ll unlock both weapon skills and can really learn how they work. You’ll find the following weapon types in V Rising:

You’ll have to wait until you get to the Iron weapons before you can craft your first Slasher or Reaper, but the rest are available from the outset. Once you have a Copper weapon, you’ll learn your first weapon skill and once you have Iron and above, your second weapon skill. Both of these open up a lot more ways to approach combat in V Rising.

The following list is subjective and is by no means definitive. This list is based on our own experiences on a PvE server. This isn’t to say that the advice here doesn’t apply to PvP. We’d love to hear from other players on their suggestions for the best weapon types in the comments below! 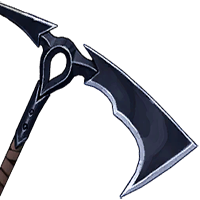 It’s hard to go against the Reaper, especially in a game where you play as a Vampire. Looks aside, the Reaper is a weapon with great reach, damage, and some of the more useful skills. It’s also helped by the fact that all Reapers have a passive ability that grants +25% Physical Damage to undead, an enemy type you’ll fight a lot throughout Vardoran.

It’s basic combo string is an average speed but it has decent range on it meaning that you won’t need to be in the enemy’s face to attack. It’s the skills that the Reaper brings to the table however that makes it so desirable, as both of them are incredibly useful in situations where you’re facing many enemies at once, something that will occur a lot in some of the later bosses.

Tendon Swing is a spin attack around your current location that will also grant a fading snare to all who are caught in it. It will also knock those enemies back, giving you time to reposition or get yourself out of danger. Howling Reaper is the real winner here though, this is a ranged Area of Effect (AoE) that will hit a group of enemies at range and inflict Slow on them, a real winner in boss fights.

(1 of 3) The Reaper has moderate attack range and speed 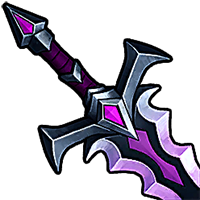 The Sword is most likely the first weapon you’ll obtain in V Rising and it remains one of the best choices for due to its speed (only Slashers are faster) and useful weapon skills for both PvE and PvP. Unlike the Reaper, its weapon category doesn’t increase damage to a specific enemy type, instead increasing the damage to vegetation.

While the range on the basic combo string is around the same as the Reaper, it’s much quicker meaning that your DPS will be higher than the Reaper if you can sustain your attacks. As always, it’s the skills that make the weapon and both of the Sword skills are incredibly useful, with Whirlwind being a great one for PvP too.

Whirlwind will see you spin the sword around you dealing damage in an AoE. This is great in its own right, especially against the add phase in many boss battles but it’s even more useful in PvP. This is due to the fact that it almost works as a gap closer, giving you a slight speed boost to close in on your target. Shockwave, on the other hand, is useful for single targets as you can launch it at range, then press the button again to teleport over to the target in the air and slash them three times. This can be useful in boss encounters to close the gap.

(1 of 3) The sword attacks quickly at decent range

The Spear trades its speed for range, making it a slower weapon than the Sword and Reaper but far greater range. With this, however, comes the fact that you’ll need to be more precise with the Spear. Like the Reaper, this weapon category comes with a passive ability, granting +25% Physical Damage to Creatures, making it a powerful all-purpose weapon.

The range of the basic combo is the strongest strength of the Spear, allowing you to hang back a little and strike bosses while giving you time to react to any attacks. The skills here aren’t as vital to the weapon as the Reaper and Sword, however they offer ways to change the positioning of the enemy, be it knocking them back or pulling them towards you.

A Thousand Spears is by far the best of the Spear skills, and the one that will give you the majority of your damage. When used, you’ll perform a multi-stab attack which is useful, but press the button again during the animation and you’ll knock back any enemies caught in it. Harpoon is less useful in boss battles, but can come in handy when farming in areas, such as pulling enemies towards you so you can avoid standing in the sunlight. 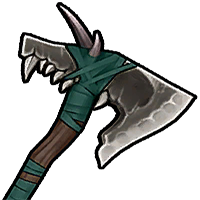 The Axes (yes, you’ll dual wield these) shares the same range as the Sword but at a slower speed. It’s easy for players to forget about the Axes as more than just a way to chop trees down. Similar to the Sword, the Axes passive ability won’t aid you against specific enemies, instead granting +25% Physical Damage to wood.

Frenzy is the best skill here, and the first one you’ll unlock. When used, you’ll dash forward and deal damage which will then grant a buff. The Frenzy state will not only increase your movement speed but also your attack speed, making this vital for both bosses and PvP. X-Strike is more of a straight damage skill, although it hits a wide arc in front of you and delivers two debuffs to the enemy, Slow and Incapacitate. 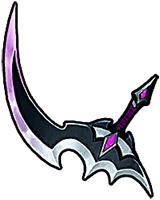 The Slashers are the toughest weapon to rank in V Rising, and arguably could be much higher on our list, especially as a PvP weapon. They’re known for being the fastest weapon in the game. Like the Sword, the Slasher’s passive ability won’t aid you against specific enemies, instead granting the same passive as the Sword, +25% Physical Damage to Vegetation.

The Slashers have by far the quickest attack speed in the game, although each hit deals less damage to compensate for it while also having the same range as the Sword. Both skills for the Slashers are mainly focused on offering crowd control options against your enemies and shine especially in PvP. Indeed, Slashers are arguably one of the best weapons for PvP (based on our limited testing).

With Elusive Strike, you can aim at moderate range, and you will dash and strike at the end point of the arrow before returning to your starting location. On addition to the damage this outputs, it’ll also inflict slow on every target it strikes. Camouflage is the stealth ability of V Rising, you’ll cloak yourself which increases your movement speed for 3 seconds and, while still cloaked, if you use a primary attack, will deal heavy damage along with inflicting Incapacitate. The best use for Camouflage, however, is getting yourself out of a jam in PvP, choosing to flee and reassess the situation.

(1 of 3) Slashers are the quickest melee weapon 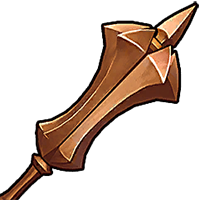 Don’t let the position on this list fool you (in fact, all weapons are useful in V Rising), the Mace is the strongest melee weapon in the game and only has shorter reach than the Spear. The main downside to the Mace is its slow speed, which is punishing in a game where speed is king. Like the Sword, the Mace’s passive ability won’t aid you against specific enemies, instead granting +25% Physical Damage to Minerals.

The Mace has the slowest attack speed of any of the melee weapons but makes up for it by having the highest attack power for its basic combo string while only the Spear has greater range (outside of the Crossbow). The Skills for the Mace are useful in a number of situations, offering high damage and good maneuverability.

Crushing Blow is arguably one of the best gap closers in the game, when used, your character will leap into the air to where your cursor is at and slam down, dealing heavy damage to all enemies around the impact and debuffing them with a fading snare. Smack, likewise, has a lot of uses, when used, you’ll strike out in a wide arc in front of you, knocking back most enemies (including a lot of the bosses) and inflicting Incapacitate on every regular enemy. 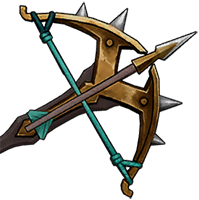 Like the Mace above, the position of the Crossbow on this list is purely down to its slow speed (the slowest of all weapons) in a game where speed is so vital. That shouldn’t deter you away from using the Crossbow however. Indeed, the Crossbow should be on every Vampire’s hotbar as a way to deal ranged damage and even kite an enemy around if you’re in a party. Unlike all of the other weapon types in V Rising, the Crossbow has no passive ability attached to it.

The Crossbow is the only ranged weapon in the game, and to make up for its superior range, it’s the slowest of all the weapons in the game. There are no combo strings for this weapon, instead you’ll fire a bolt that can inflict 115% Physical Damage. The Skills for the Crossbow serve two purposes, the first is great for AoE while the second has the ability to interrupt casts.

Rain of Bolts is arguably the best AoE weapon skill in the game, allowing you to use it at great range and over such a wide area. It’s even useful when fighting against a single large enemy as most of the bolts will strike the same target adding to the damage. Snapshot, however, is much more situational, the damage isn’t fantastic but the cast speed is decent. More importantly though, you can use it to interrupt when an enemy is casting, this is vital in some of the magic casting boss fights.

V Rising is an survival game developed by Stunlock Studios. First announced on May 5, 2021 for Windows, early access started on May 17, 2022.

This guide for V Rising features everything you need to know to get an advantage over the other Vampires and currently contains the following: