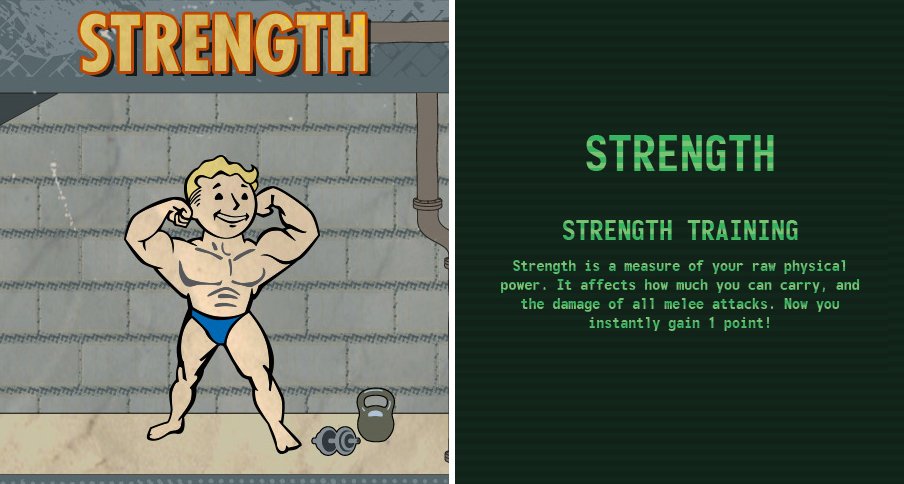 "Strength is a measure of your raw physical power. It affects how much you can carry, and the damage of all melee attacks."

Strength has always been a dubious attribute in the Fallout series, handy if you planned to make a melee build, which usually fare poorly when compared to conventional ranged weapons. So it is in Fallout 4. Since Strength isn't required to use any weapons or wear any armor (like in Fallout: New Vegas) Strength is, for most players, worth only what perks you can get out of it. For melee-oriented characters, Strength increases melee damage by about 5% per point invested, which is a significant boost for melee builds, and the +10 carry weight per point doesn't hurt, either. That said, let's look at the perks and see how they fare.

Good old Iron Fist returns in Fallout 4 as an entry-level perk. As usual for weapon-oriented perks in Fallout 4, this perk increases your damage with said weapons (Unarmed weapons in this case) by 20% per rank, up to a maximum of 100% at rank five, at which point it also gives you the chance to paralyze foes in VATS. Paralyzing Palm, anybody?

Obviously, the usefulness of this perk will be affected by how potent unarmed weapons are in general, so it's a good idea to take a look at them and critique them. As awesome as Paralyzing Palm was in Fallout 3 - being the ideal way to take down Super Mutant Overlords, Feral Ghoul Reavers and Albino Radscorpions - these threats aren't quite so terrible in Fallout 4, in that they're not nearly as padded with laughably high Hit Points and Damage Resistance. Simply put, a few banked criticals will see you through any fight, without the need to paralyze your foes. Unarmed weapons (and this applies to melee weapons as well) tend to be slower outside of VATS, and consume large amounts of AP in VATS, further diminishing the potency of the paralysis effect in Iron Fist.

To really make the most out of unarmed weapons, not only will you have to invest in Iron Fist, but you'll want to pick up Blitz (which requires a whopping nine Agility) and Ninja (seven Agility), at which point a mid-range sneak build will work well enough. However, comparing the capabilities of this build to, say, a simple guns/sneak build fares poorly, since quality unarmed weapons are rare, slow, and tend to deal significantly less damage than most guns. While it can be great fun sneaking around a Raider camp, teleport-killing foes with a Deathclaw Gauntlet, point-for-point, you may end up wishing you invested in guns in the long run.

Big Leagues is to melee weapons what Iron Fist is to unarmed, although the ability to cripple or behead foes at rank five is arguably more viscerally appealing than Iron Fist's paralysis. Melee weapons have a lot of things in common with unarmed weapons, unfortunately, generally being slower and lower-damage than guns - at least, until you start finding rarer melee weapons like the Ripper and Super Sledge. All in all, melee weapons are more diverse than unarmed weapons, having a wider damage and speed range, but they still require plenty of points invested into them to become practical (Ninja, Blitz) and even then, mostly for a stealth build.

Armor allows you to - what else? - customize your armor, be it a humble set of underclothes, some leather armor, high-end combat armor, or even Power Armor, although you may need some additional ranks in "Science!" for some high-end mods. While the benefits may seem dubious at first, these perks are absolutely essential in the long run, as they allow you to create lighter, more protective armor, or even armor imbued with resistance to specific forms of damage. The big draw, however, is the ability to add the "Ballistic Weave" mods into some standard suits of clothing, which give absurd amounts of physical and energy resistance. With Armorer rank four you can add "Ballistic Weave Mk5" to such clothing, giving 110 defense, which, well, is about as much as you can expect from a full suit of Heavy Combat Armor (with Polymer defensive mods, at that!). It's the only way you'll get a great defensive score without resorting to Power Armor, and the difference between the survivability of a character who doesn't invest in Armorer compared to one who does is pretty spectacular. Invest in this perk. Your Hit Points will thank you. Also, being able to craft your own armor mods will allow you to throw Ultra-Light mods on things, which will boost your Action Points and make sneaking easier, which in turn will make you that much more dangerous.

The crafting perk for both melee weapons and unarmed, this perk pales in comparison to other crafting perks (Science!, Gun Nut and Armorer) because the returns are honestly not as great. Most melee weapons have very few mods compared to guns (often one to three mods for most weapons, whereas most guns have twice as many scopes available). Still, if you like melee combat, you'll drop some points into this to squeeze out every bit of damage potential possible.

Heavy Gunner increases the damage of a very limited selection of weapons, including the Minigun, Gatling Laser, Flamer, Missile Launcher and Fat Man (the last two are, in fact, also affected by Demolition Expert for double dose of damage boost). This perk is only as good as the weapons it affects, so a discussion of the value of Heavy Gunner is, in essence, a discussion of the potency of heavy guns.

The Minigun and Gatling Laser are both very similar, save one is a conventional ballistic weapon and the other is an energy weapon. They're heavy, slow you down, greedily consume ammo and fire quickly - and can absolutely mulch even the strongest of foes in the game fairly quickly with the right mods and upgrades. The Flamer is a flamethrower of various ranges and potencies, depending on what mods you install, but it too functions as a direct-fire weapon that is best used as short range. It does trade off some kill rate and range for fire damage and area-of-effect damage, if that strikes your fancy.

The last two common heavy weapons; the Missile Launcher and Fat Man are both long-range explosive weapons that have relatively scarce ammo, fire slow, but deal immense damage over a long range. The Fat Man in particular is basically an "I win" weapon that's probably over-kill to boost with both Demolition Expert and Heavy Gunner. The Missile Launcher is a more modest long-range explosive weapon that has more utility, less explosive radius and deals less damage, but you can also modify it to allow for multiple shots between reload and freakin' heat-seeking capabilities. All in all, the Missile Launcher is probably more useful in a fight-by-fight basis, but the power of the Fat Man is unsurpassed.

All in all, heavy weapons are satisfyingly powerful, but rather niche in their application. In big fights with lots of powerful foes, they're worth bringing out, and they look pretty damn neat in a suit of Power Armor, but for general use, you're probably better off using smaller, less cumbersome weapons.

If you hate inventory management (who doesn't?) this perk is worth a look. The first two ranks give you +25 carry weight (the equivalent of five points of Strength in total), while the third lets you sprint by expending Action Points. The fourth lets you fast travel while encumbered. All in all, this means less time slowly ambling around, your poor spine creaking under the weight of your perverse greed. A good boon for pack rats, but since it's a convenience perk, it's hard to recommend too strongly. Once you run out of other, better perks to pick, however, it makes a fine utility perk.

This perk promises to improve the hip-fire accuracy (the size of the unaimed reticle), and at that, it delivers. If you invest two ranks in this perk you'll notice a marked accuracy improvement. There's only one problem; it's patently unnecessary. With an investment in either Gun Nut/Science! you can increase the accuracy of your weapons significantly, and in the case of a Laser Rifle, to the point where the benefit of this perk is dubious, at best. For most guns, however, you'll still see a reduction in the size of the reticles, and automatic weapons are notoriously inaccurate and benefit from this perk more (even though it does nothing to mitigate kick-back). All in all, however, mods make your accuracy suitable for shooting down foes at close range, and at long range, you're better off using a scope.

Ah, the first blatantly garbage perk, Basher increases the damage you deal while gun bashing. It takes four perks to double your damage, and while this might sound like an improvement over the normal weapon damage perks, there's one downside to this perk - namely that weapon bashing at its best does crap damage. So you can waste four perks to do double crap damage, or you can just use a melee weapon to do proper melee damage. This is a waste of perks.

Kind of a mixed bag, Rooted has ups and downs, some of which aren't readily apparent. First, the melee damage boost is nice, but most foes will either try to stay out of melee combat with you (making it hard to hit them while moving) or are dangerous and powerful critters you probably don't want to get into melee combat with anyway. The 50 Damage Resistance is also nice, but the moving trouble rears its head again, and 50 Damage Resistance on its own isn't a great enough boon to protect you nor is it hefty enough to avoid being over-shadowed by simply wearing some Ballistic Weave clothing. On the other hand, the third rank adds the automatic ability to disarm enemies who try to melee you. At a glance, this might seem to only affect melee foes, which isn't that impressive (even a Super Mutant with a Super Sledge isn't a great threat). What happens in practice is that when you approach armed enemies, their natural response is to attack you in melee, even with a gun bash which often ends with ranged foes being disarmed, who then resort to trying to fisticuffs with you. This is a good thing, as an armed you versus a disarmed them is a recipe for dead them. So, with a melee build, this might not be a terrible perk if you get three ranks in it, but it's still not a must-have by any means.

This perk is, well, kind of stupid. First, it only applies while wearing Power Armor, obviously, which should be a fairly rare occurrence. Second, the damage you'll deal by running into foes (even with three ranks) is pretty unimpressive. The knockdown is nice, but honestly, you're better off spending your time just shooting them rather than wasting your time running at them. Besides, sprinting eats up Fusion Cores. It's just a bad return on your investment, in both perks and Fusion Cores.