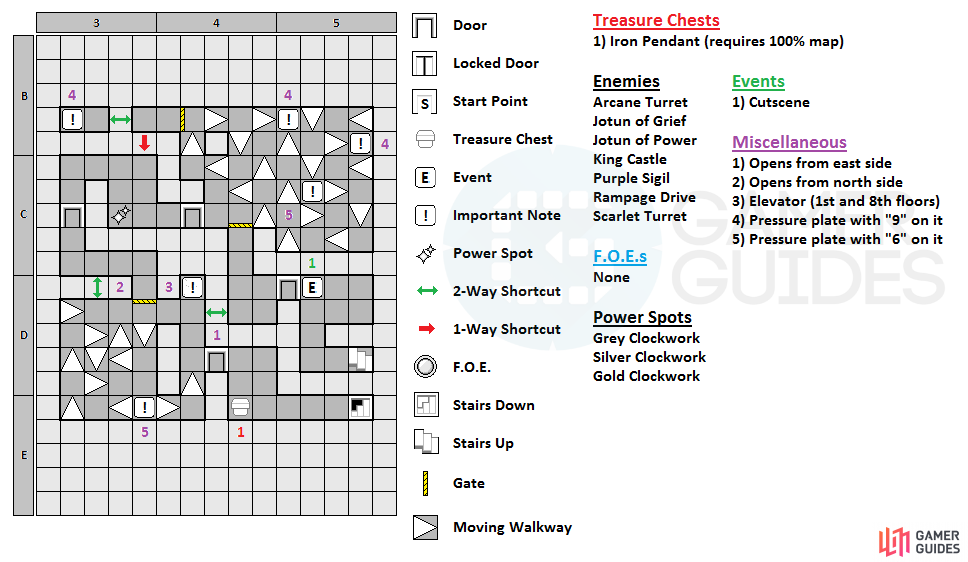 One of the first things you’ll get told about on this floor is that there’s no FOEs on it, which is a nice break from them. However, as you’ll find out soon enough, the floor is a bit of a puzzle, as there are a few gates like earlier and a lot of conveyor belts. Straight ahead of you is the 100% map chest, which contains an Iron Pendant . Go through the door and head straight north to find an elevator that leads to the first floor, which is only really helpful if you need to get to the fifth floor for anything (you always have the option to start from the first floor when you choose a labyrinth).

Anyways, west of the elevator is the first gate of floor, along with a bunch of one-tile conveyor belts. On the south end of the room is a pressure plate, with the number "6" on it, so make your way to it. Once you do step on it, follow these directions to get past the gate: west one tile, west one more, north one, east one, then east and north to clear the gate. Before heading through the next door, open the shortcut nearby so you don’t have to go under the gate again. There will be a Power Spot through the door, then another door that’ll lead into the last big room of the floor, complete with conveyor belts, two gates and more pressure plates.

There is a gate right by where you entered, as well as another one in the northwest corner of the room. Also, there are three pressure plates in the room, two of which have "9" written on them and the last one having "6" on it. Right away, let it be known that you won’t be able to reach the southern gate via any of the plates in the room, so ignore that one and concentrate on the other gate. For now, get to the plate in the middle of the room, which is the "6" plate. Once you step on it, go west one tile, west one more, west once again, north and then west one last time to go through the gate there.