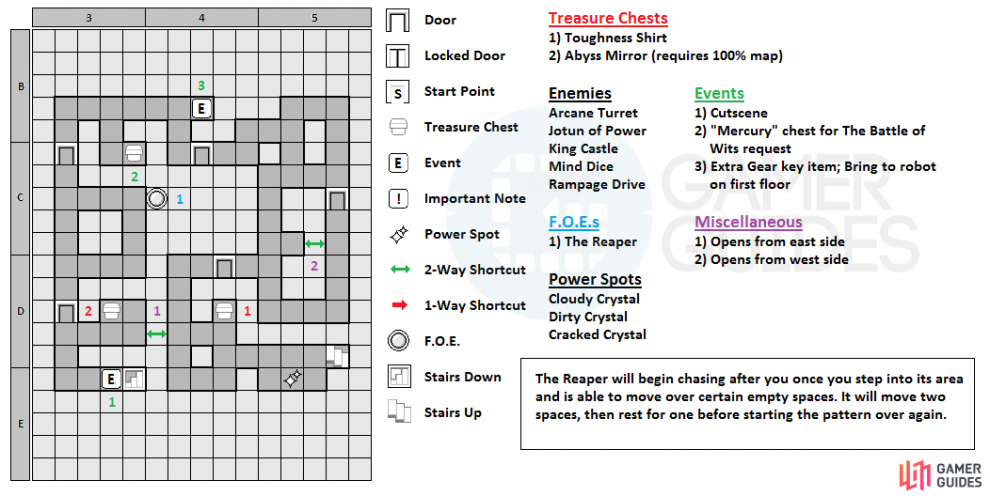 As you might have noticed, the first floor of the dungeon was relatively short compared to other labyrinths and it will stay this way until later on in the dungeon. There’s a cutscene that occurs as soon as you appear on the floor, where you’ll hear some familiar chains if you’ve played Persona 3. There isn’t much in the first area, besides a shortcut that opens from the east side and the 100% map chest ( Abyss Mirror key item , which unlocks the Body-Soul Reverse accessory). Go through the door and you’ll be introduced to the second FOE of the dungeon, The Reaper .

Of course, as with all other FOEs, it has a distinct movement pattern. It will chase after you for the first two steps, then it will rest and not move on the third step, before repeating this pattern. The catch, though, is that The Reaper can move through openings in the floor, so you’ll have to figure out the best way to avoid it. This first area is a loop and the door is straight to the north of you, so it should be fairly easy to avoid The Reaper. In the next area, The Reaper will not chase after you, so you’re safe. The chest here is part of The Battle of Wits request , so ignore it and investigate the other dead end to find an Extra Gear item (used on the robot from the first floor).

The Reaper is one of the most difficult enemies in the game (left). The Extra Gear item (right) can be used on the robot found on the first floor.

When you go through the next door, The Reaper will resume its pursuit and this area can be a little tricky. The first part is a loop and there will be a door on the eastern end, which doesn’t stop The Reaper from chasing you. There’s also a western path that leads south and this is where you want to get to first, as there’s a two-way shortcut that opens from this side and will be used to help sneak by The Reaper. Once you’ve opened the shortcut, lure the FOE over to the eastern path, making sure that you will be able to access the shortcut.

Take the shortcut once it’s close enough and you should be able to easily get to the door, making The Reaper stop its pursuit. Before ascending the stairs to the third floor, open the shortcut that’ll lead to the beginning area of this floor, and don’t forget to loot the chest ( Toughness Shirt ) and Power Spot.

With the eerie tolling of the Yasogami High School bells, 18 Persona-users find themselves trapped inside the labyrinth of a strange other-world. There, they meet Zen and Rei, an odd duo who have lost their memories. As the parties come together to seek an escape, a mysterious shadow creeps ever nearer. Persona Q combines the story and characters of Persona with the gameplay of Atlus' dungeon-crawling role-playing series, Etrian Odyssey.

You will find a plethora of information in this guide, including: