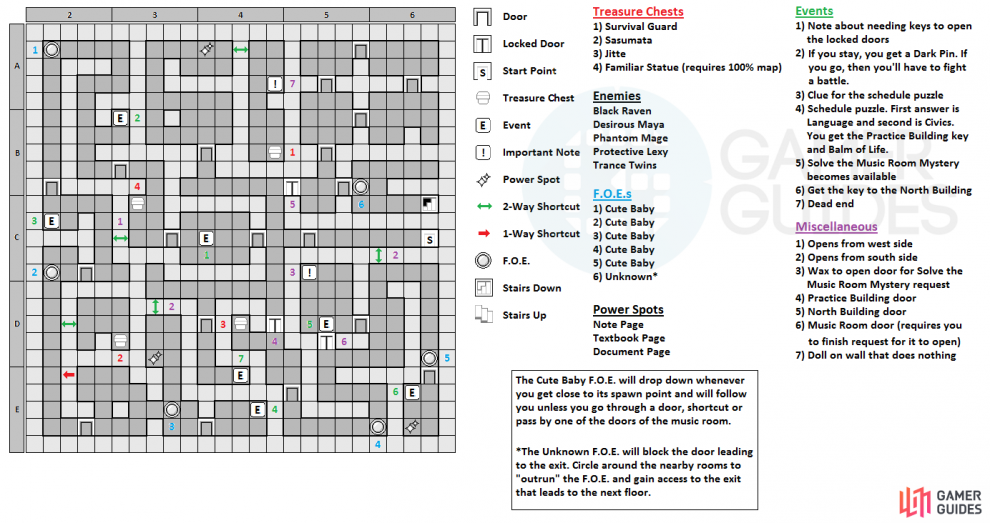 The first corridor is straight and has nothing of note, besides that the shortcuts in this labyrinth are the yellow construction signs. Through the door, you have multiple paths in front of you, with the door straight ahead of you leading further into the dungeon on this floor. There’s also two locked doors, both of which require keys to open them, so ignore those. The open door to the south leads to nothing but a dead end, so head north for now and go through that door. This big room is empty, except for a Power Spot at the north end, as well as a shortcut that leads to another room with a doll on the wall (does nothing) and a chest ( Survival Guard ).

Head back to the beginning and enter the central door, where you’ll find a piece of paper on the ground that says you’ll need some keys to get further into the dungeon. In the next room will be the 100% map chest (Familiar Statue) and beyond that is another hallway, with an event at the dead end. You get the choice to either check on the noise or stay; staying will net you a Dark Pin accessory, while going will end up having you fight a battle against a Trance Twins, Phantom Mage and Protective Lexy. Whichever you do, follow the path north and you will eventually run into the first FOE of this labyrinth.

Note the sound of the rattle, as that’s your clue when a Cute Baby FOE will drop down. This one will chase after you and move a single step for every step you take. Luckily, the FOE won’t follow you through doors, so go straight south and through the door to get away from it. Once you party stops talking, go one space south and inspect the paper on the ground for some clues about the puzzle on this floor. Keep going along the path, opening the shortcut on the way, and go through the next door. You’ll run into another Cute Baby here, but you can use the shortcut nearby to go into a small room to escape it (and also grab the chest for a Sasumata ).

Go back through the shortcut and south to the next room, where a Cute Baby will drop to block your path as you go east. You can outrun it by going north or south around the loop, then either going north to open the shortcut there or through the nearby door. The door will lead to the first puzzle of the labyrinth, so get ready for it. If you take a look at the schedule, it actually repeats itself across the days, so that’s one clue. Remember the clue from earlier about "after shop class is art and before geometry is science," which will fill in some blanks. If you keep choosing the option with Naoto in it, she will solve the puzzle for you, but if you want to solve it for yourself, the first answer is Language and the second one is Civics .

You will get the Practice Building Key , as well as a Balm of Life, for your troubles. Return to the southern locked door, which is the Practice Building, and unlock it, allowing access to more of the dungeon. As soon as you enter, go west for a chest containing a Jitte . Continue south and you’ll eventually run into another Cute Baby FOE, so run away from it and you’ll notice some music playing as you approach a door. Keep moving from the FOE and when it reaches the door, it will fall asleep, where it will stop chasing you. Go around the east side and you’ll see another door, so head inside and inspect the other door to get the Solve the Music Room Mystery request to appear in the Nurse’s Office.

That’s all you can do in here for now, so exit via the same door as before and go north, opening the shortcut. Now, return to the corridor and go east, then south to run into another Cute Baby. Lure it back to the open door by the music room to make it fall asleep, then go to where it was to find a room with a Power Spot and the North Building Key . Return to the starting area and unlock the north door, where the next door straight ahead won’t open. Head north and the door behind you will be blocked by something. In order to escape it, move in either a clockwise or counterclockwise pattern around the four rooms here, then go through the door that was initially blocked. On the north end is a dead end, and the stairs to the second floor are to the south.