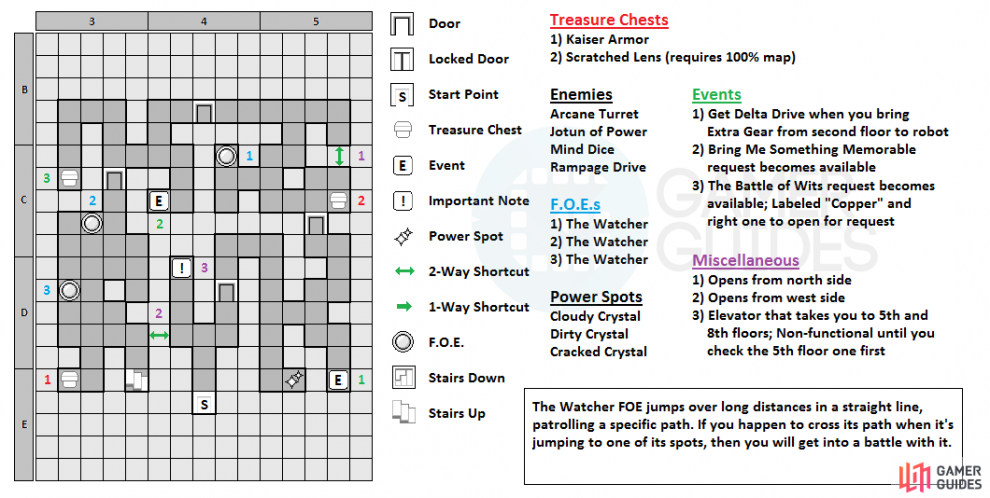 The Clock Tower, as you might have guessed, is the final dungeon in the game and it can be a long one. At the beginning of the dungeon, go west at the first fork and you'll see something you can't use at the dead end, so ignore it and head along the other path until you get to another split. Going south here will lead you to a Power Spot and you'll find a robot that needs a gear at the southern dead end at the next fork in the path. In the next area, you'll run into one of the FOEs of this labyrinth, The Watcher .

Note: Although it looks like you will need to use the contraption that doesn't work in order to get 100% on this floor, you actually don't and it's possible to get 100% on your first visit here.

This spider-like FOE will hop in a straight line along a specific path and if you get in its way when it's hopping to one of its spots, a battle will commence. The Watcher is weak to electricity, but knows some high-level magic, such as Mabufudyne, Magarudyne and even Mamudoon, should you choose to want to fight it. Note that the 100% map chest ( Scratched Lens key item ; makes Analysis Scope item available in shop) is right past the door when you enter the room and there's a two-way shortcut just north of the chest, which opens from the north side. It's best to ignore the FOE for now and make your way past it, opening the shortcut and then going through the door on the north end.

The two dead ends in this area lead to two requests you can open up in the Nurse's Office, one of which is a chest that opens The Battle of Wits and the other being Bring Me Something Memorable . For now, the only way to continue is through the southern door, where you'll find two Watchers in the room. It might prove a bit difficult at first, but you can easily make your way past both without having to fight them. In the southwest corner of the floor is a chest that contains a Kaiser Armor and make sure you open the shortcut before using the stairs to ascend to the second floor.