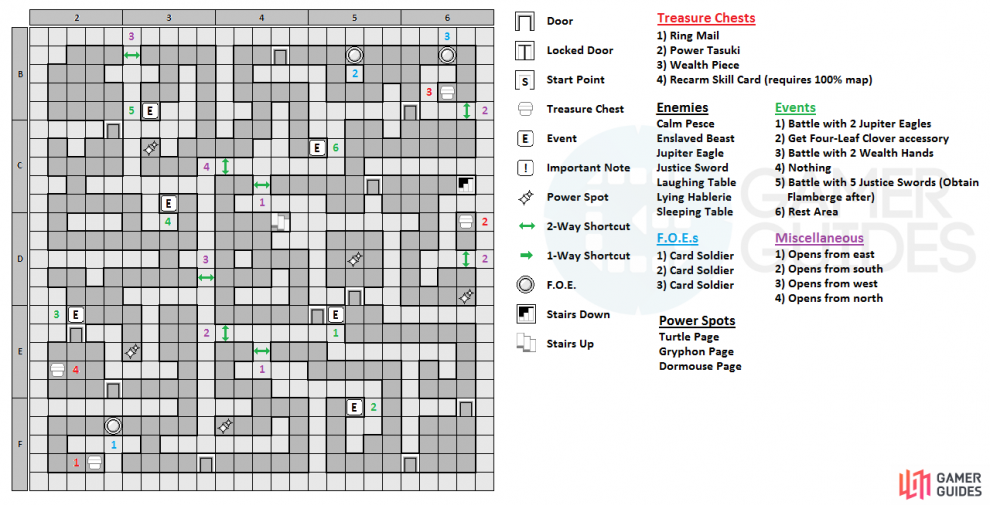 You’re in a big room at the start of this floor, but any shortcut you encounter will need to be opened from the other side, so head to the southeast corner to find a door that leads further. Of course, there’s a Shadow past the door, which will pit you against two Jupiter Eagles (weak to Wind and Light). There’ll be another door right by you, which brings you to a 3x3 room with a Power Spot in the middle. Feel free to harvest it, then continue traversing the dungeon until you go through another door, where there will be a short cutscene.

This room contains nothing, so continue on and through the next door, going west to a dead end where you’ll get a Four-Leaf Clover accessory for opening the picture book. Back in the previous room, take the north path and you’ll happen upon a pink rabbit. After a brief discussion with your other teammates, you decide to chase after it to try and catch the rabbit. However, any time you move within one tile of it, it will jump away, so keep following it to the dead end. There’s a slight problem, though, as the rabbit will jump through the hole, creating a shortcut for you to go through as well.

Follow the rabbit and then open the shortcut going north nearby to be back near the stairs that lead back up to the first floor. If you feel like you need to take a break and return to the school, then do just that (your team says to return, but there’s nothing to do there); otherwise, continue south to a split in the road. Going south will lead to a dead end with a Power Spot, while the other path continues the dungeon. There will be a Card Soldier FOE in the next area, which walks back and forth on the horizontal path. If you time it so you can sneak past it, there will be a chest west of the FOE, which contains a Ring Mail .

Time it again to make it back on the previous path south of the FOE, then when it goes west, you go east this time. To the north of you will be another shortcut that leads back to the main room with the stairs that go to the first floor, so make sure you open it. In the next room is the chest that requires you to have 100% map completion for the floor and there will be Shadows on the other side of the door (2 Wealth Hands). These enemies are rare Shadows (there’s a golden Shadow in each labyrinth that can be found on all floors) that tend to dodge everything you send their way, but they give great experience if you manage to defeat them.

The dead end north of where you went through the door has nothing and the one that leads south has a Power Spot. Continue north and activate the shortcut that leads back into the first room, then go north of there to a dead end event. There’s nothing else along the way until you go through the next door, where you’ll meet the pink rabbit once again. The dead end where you need to corner it is to the north, so follow these directions to get it there quickly: west three tiles, north one, east one, north one, north one and then east one more . Just like before, the rabbit will jump through the wall, creating a shortcut for your party.

On the other side of the shortcut, go south to a dead end, where you will find a sword on the ground. Grab the sword and you’ll get into a fight with a total of five Justice Swords. Defeat them all and you’ll get a Bastard Sword for your reward (this is a Flamberge on the Persona 3 side). Take the other path and head west at the fork to find another Power Spot, then continue east, making sure to open the shortcut to the first room. Before going through the next door, take the path to the dead end to find a rest area, where you’ll replenish a little bit of your health. Now, through the door will be two Card Soldier FOEs, but ignore them and follow behind the one.

You should see a treasure chest past the second FOE, but you can’t reach it without actually fighting the FOE, which is probably not possible for you at the moment, so ignore it and head south, through the door. Now, as soon as you go through the door, go east to find a shortcut, which will lead you straight to that previously seen chest ( Wealth Piece ). As you go back, you should see another shortcut to the beginning room to the west, then another door leading east. The pink bunny makes another appearance, going down the stairs when you begin chasing it once more. Before you go down yourself, go south to find yet another Power Spot and a shortcut just north of it, netting you a chest with a Power Tasuki accessory in it. You can now use the stairs to the third level.