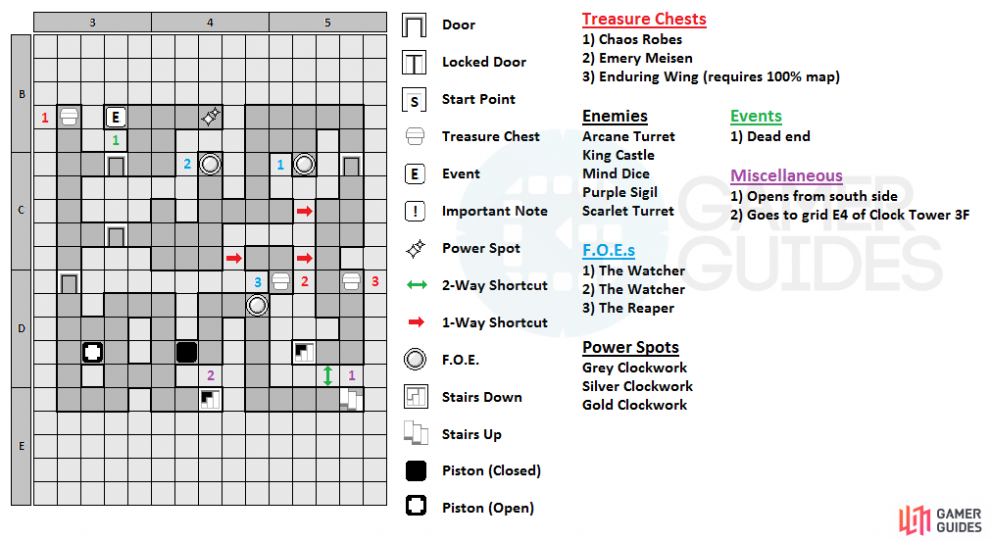 The fourth floor of this labyrinth is probably the first one that will require some thought, as you will encounter the first puzzle here (not in the traditional sense). There’s a shortcut right by where you first appear, but it opens from the south, so head north (100% map chest along the way) and through the door. As you will notice, there will be two Watchers hopping around in this area, so you’ll have to be a little careful of their pattern. At the first dead end you encounter will be a one-way shortcut that leads back to the starting area.

In the southeast corner of the area just before the next door is a one-way shortcut that leads to a small room with a chest ( Emery Meisen , an armor), but be aware that the Reaper will start chasing you here (it won’t reach you if you go in, grab the chest and then leave via the other one-way shortcut). Go back to the previous room and take the western door this time, where you’ll find another chest all the way north ( Chaos Robes ) and another door, with nothing but a dead end event and a Power Spot.

Take the southern door and you’ll be in the area where the Reaper will now chase after you (it’s to the right). As you make your way to the right a little bit, you’ll notice there’s two pistons here, with the one on the right being up and the left one being down (if you’ve gone straight here from the previous floor). Your goal right now is to get to the southeast portion, where you’ll find stairs that lead back down to the third floor. When you do manage to get back to the third floor, open the shortcut that’ll allow you to right by the first piston you encountered.

Back at the southern section, go north all the way by the conveyor belts to find a chest that contains a Quartz Mail . Go back south a little bit and hit the button to raise the second piston, which will help you get past The Reaper on the floor above, so return to the fourth floor via the stairs you just used. Now you’re on the fourth floor again, the piston on the right side should be down on the third floor and the one on the left should be on the fourth floor. You will want to lure the Reaper over to the west side of the western piston, which will allow you to bypass the Reaper and make it all the way to the stairs leading to the fifth floor (make sure you open the shortcut right by the stairs).