If you’re new to the world of either Tower Defence games or just to Fieldrunners in particular, then you can get off to a strong start by following our tried-and-tested pointers below. Keeping these in mind as you play will make your time with the game all the more enjoyable. 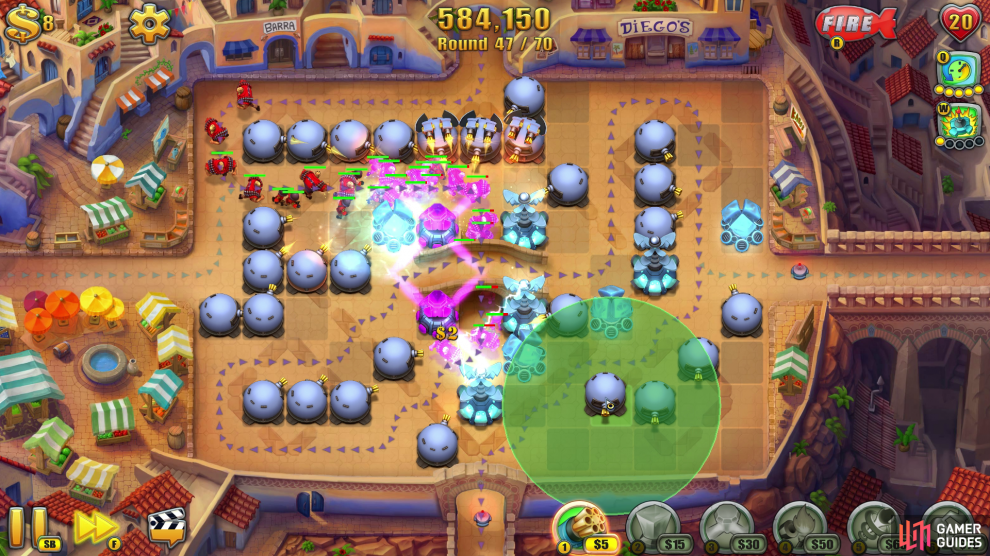 The only mode where you’re at a disadvantage of pausing the game is during Time Trial maps (as the clock will continue to count down regardless). Otherwise, it’s key to hit the pause button if you need to either take stock of the current situation or if you’ve just hit the exact $ needed to buy a new tower, upgrade an existing one or sell and replace a weaker tower.

Pausing is also paramount in making Sudden Death maps manageable. There’s a load of enemies in these maps and you’ll rack up money very quickly, so pausing each time you hit a financial milestone and then upgrading/buying is highly recommended.

Finally, pausing the game will show you the current paths all Fieldrunners will take from each entrance on the map. You can keep pausing the game to make sure any towers that you want to place down (but have yet to do so); will redirect the units to the desired location. 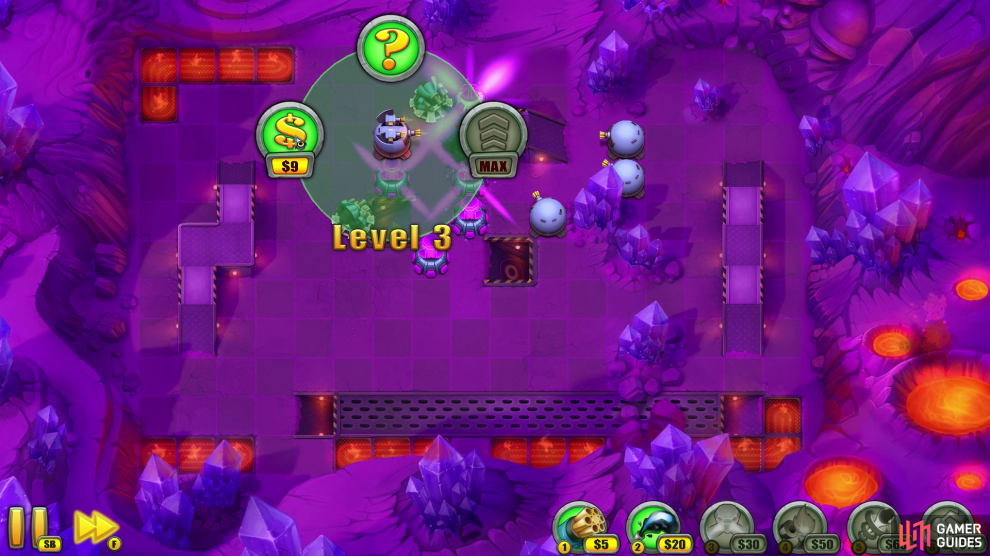 Leaving a map packed with Gatling/Machine guns might leave your coffers nice and full, but odds are that they’ll simply not do the job when the difficulty ramps up. That’s why it’s worth learning the amount of money you can regain by selling a particular tower. There’s two times you can buy back a tower and one is better financially than the other:

Keeping buy backs in the back of your mind at all times, allows you to upgrade or plant/replace a tower at the earliest opportunity (an essential thing in Time Trial and Sudden Death maps). 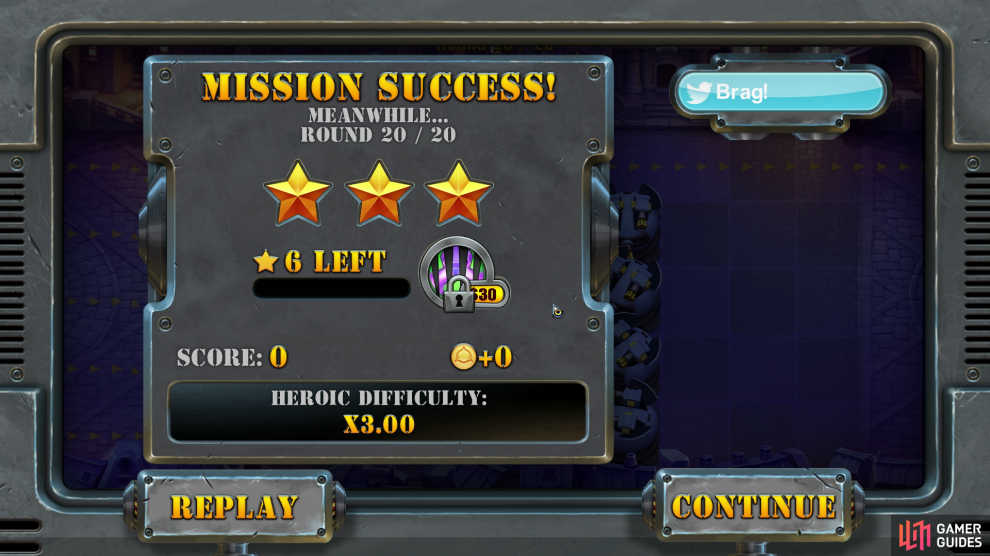 Once you’ve played the tutorial level to get your bearings on how Fieldrunners 2 plays further levels will open up. But you can also replay the Tutorial level again on Heroic immediately afterwards for a very easy additional 2 stars (follow our guide on the next page for this very solution).

From here, you can finish the next new map 'Twist of Fate' on Casual or Tough for enough stars to unlock an additional useful tower or two (such as the Hive Tower, Tesla Tower and Flamethrower). At this point, you can begin to make Heroic difficulty much more manageable, even with this starting selection of towers.

Oh, and if you’re playing the iOS version of the game, then you really should download both the free and paid versions as this’ll unlock the super effective Polymorph Tower for free (compared to 15,000 coins)! It’s the only slowing tower you’ll ever need and you can unlock it even before you play the first map! 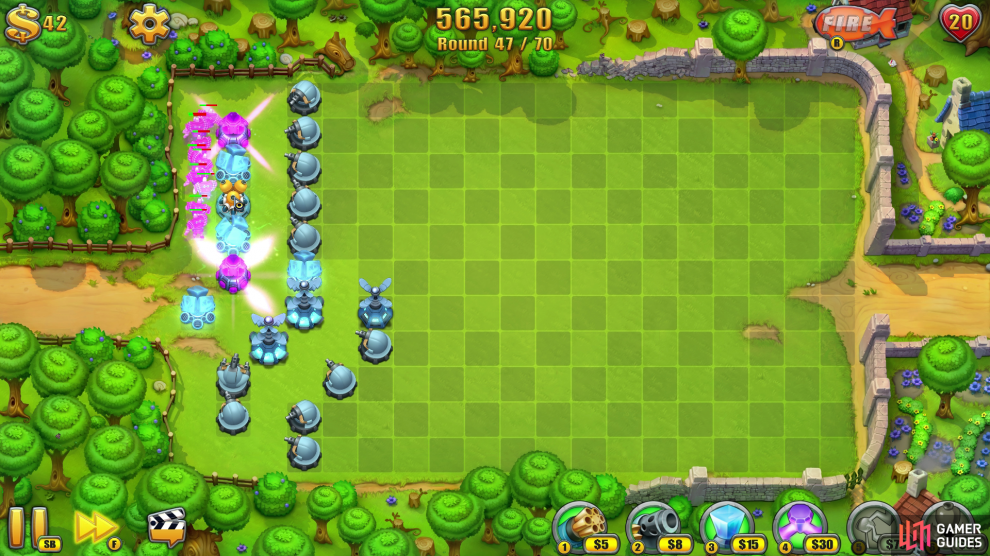 Whilst the first few maps have such key points pre-defined, on later levels you’ll have to make them yourself. Keeping in mind that Fieldrunners always look for the shortest distance to their exit (and that they prefer to run upwards , instead of downwards), you can use towers to push them into confined spaces (that ideally loop back over themselves).

Creating corners will also slow a unit down as they take longer to turn. Knowing this upfront means you can place a slowing tower right near a corner and then right on the corner, you can use a powerful area of affect tower to deal some serious damage. 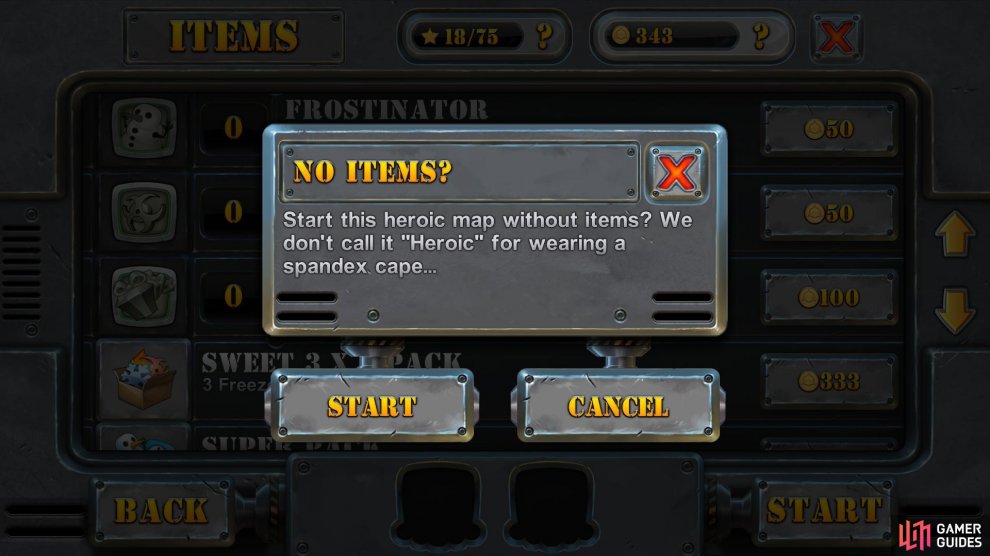 Whilst it may not be essential to take items into a map with you if you simply want to beat a level - on any difficulty (unless you’re chasing your highest ever score in an endless mode map); don’t underestimate their effectiveness in battle.

Even though some runners are immune to certain towers (such as Hazmat’s and Gas Towers for example), they’ve no such luck against any of the items (so you can take out a group of Hazmat runners with the Spanish Flu). Therefore, having a varied selection of items can simply make getting 3-stars on every level that much simpler. 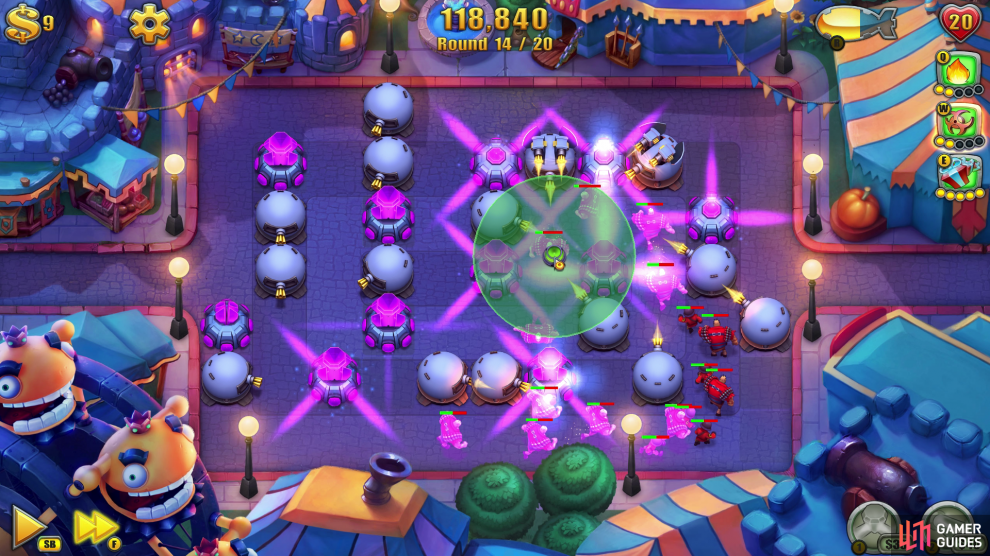 Whilst you can certainly use your items any time you like, the great thing about them is that their damage % dealt doesn’t change as the enemies get tougher. So, for example, a Flame Fountain will deal 100% damage to a Fieldrunner with any sized health bar. This is why they’re perfect for endless mode where the health given to each runner jumps up massively (compared to regular rounds). They’ll still take out tank-like units, even when your own weapons are barely tickling them. 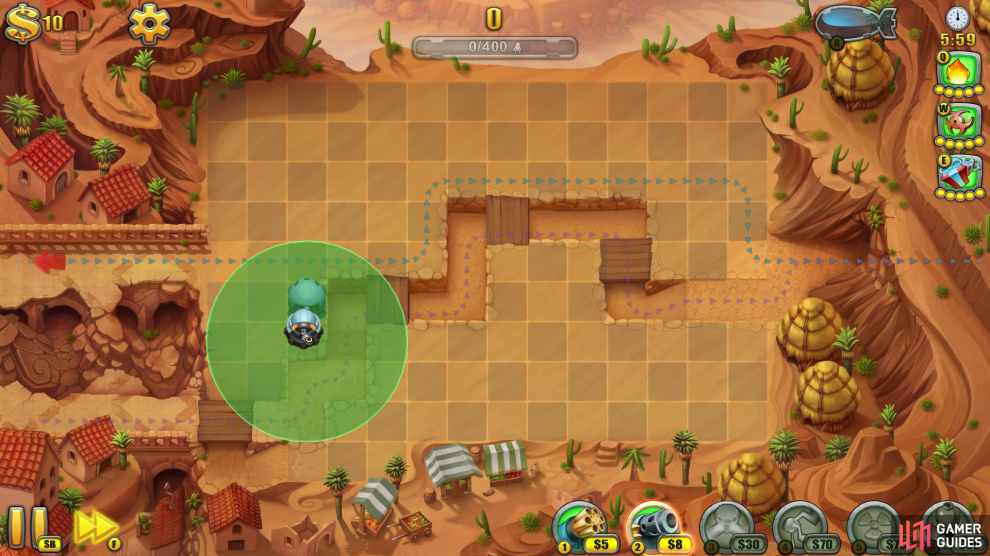 One advantage of having more than just a touch screen is that the keyboard allows you to select towers and items at the press of a key. This proves to be especially useful in Time Trial maps were the clock keeps ticking, even if you pause the game.

Keys 1 - 6 will select the towers in the order they’re showing at the bottom of the screen, and keys Q, W and E will select any items you’ve brought into the map with you. You can double check which key selects what by looking at the towers or the items as they’ll be labelled. 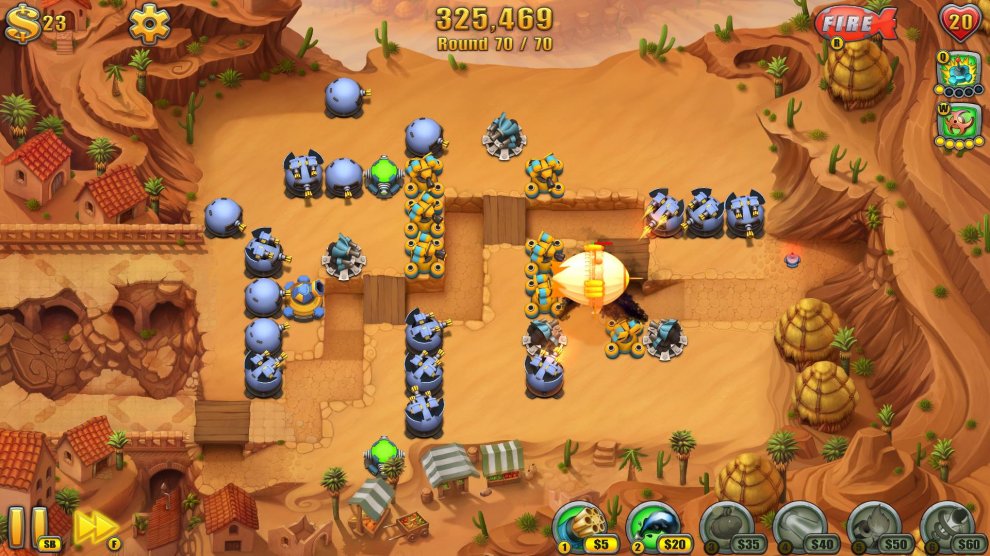 Not every map has every Fieldrunner dashing through it to the exit, this means that it pays to pay attention to what Fieldrunners do appear. Example: On the Sudden Death map 'Mean Streets', there’s a massive number of Hazmat runners. If you took in Poison and Radiation Towers then you’d be wasting your time.

Likewise, Lavaflow’s levels are packed with Toastmasters, so taking fire-related towers into these levels are less effective. So don’t take in any towers where there’s runners that are impervious to them, it’s just a waste of a tower. Pick a more 'runner neutral' tower instead for maximum effect. 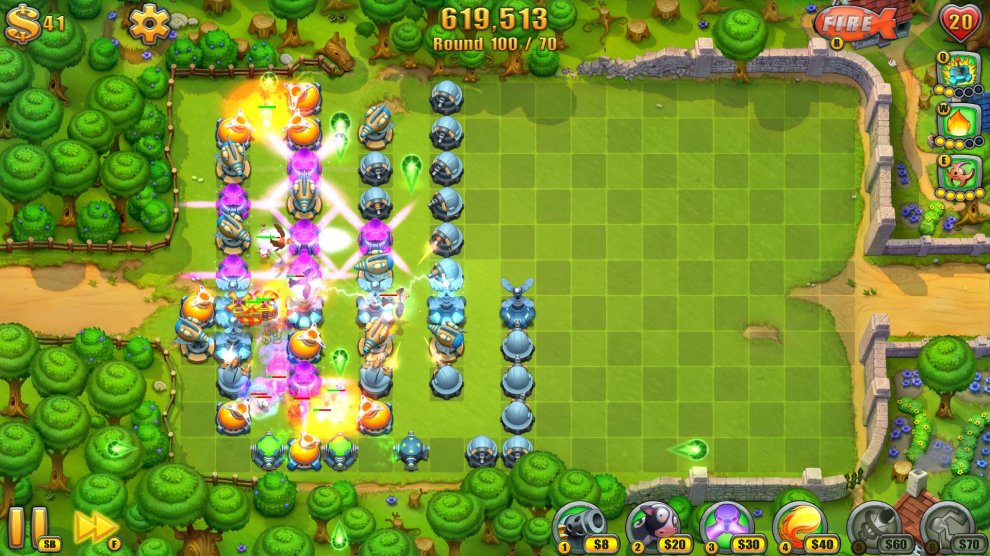 What this means is that towers that deal an effect rather than damage (such as a Slow Tower), can’t have their effects doubled by hitting a runner with two or more of them. Example: If you hit a runner with a Glue Tower, hitting it with another one won’t slow them down any more than they already are.

Same for things like Gas Towers or Radiation Towers, the damage they deal over time is 'set'. This means that you should take into account their effective range and make sure they’re not overlapping, as that’s a waste of their potential. 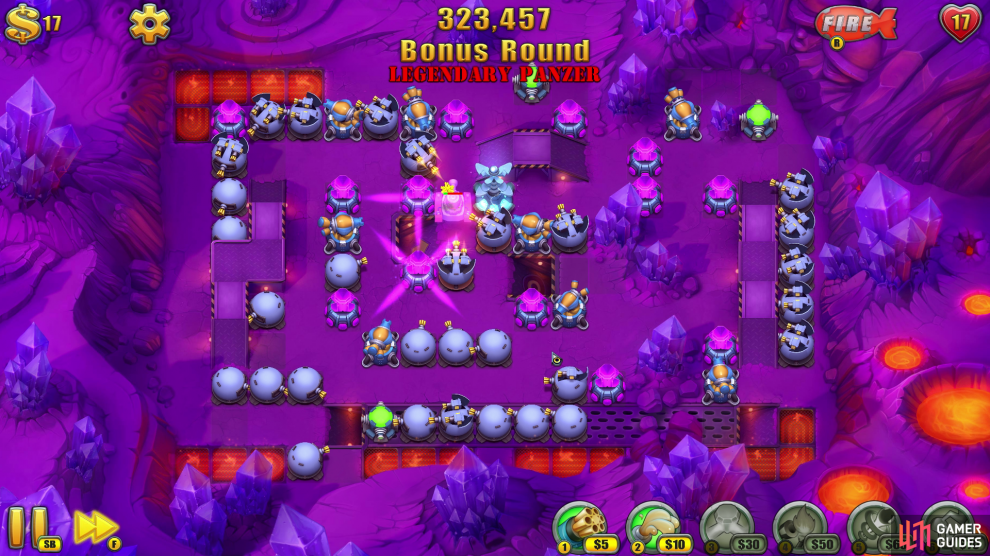 Seeing as Fieldrunners are designed to take the shortest route to the exit, you can be really crafty and use this against them. If you’ve got a heavy-hitting long corridor, you can sell a tower at the end before they get more than halfway down.

This will cause them to double-back up the corridor to the new exit. Now, before they get to it, place a cheap turret back down, forcing them back down that same corridor. If you have a decent bit of cash, you can keep repeating this until they’re dead (or you money runs out).