Everything is black and white, retro, in this world. The music and sound effects may sound a bit off too, that is intentional. Leap up to the chest in the background to find the Cornerstone Hill Map (1/7) then hop down. Open another chest for a Frost Shard (2/7) then head to the Pier after checking the Moogle Shop.

Open the chest under the tree to find a Hi-Potion (4/7), use Valor Form to High Jump above the tree and claim Two Sides #9 . Open the chest on the far side for a Mythril Shard (3/7) then claim Edge #6 next to Pete. "Punish" Pete by beating him up. He doesn't do much and has a Reaction Command "About Face" for when he starts running amok.

Seems Pete isn't the bad guy here after all. Back at the Cornerstone of Light are now four windows to different areas, teeming with Heartless. Start on the left entering the Building Site. Here you must fight off the Minute Bombs and the new Hammer Frames before the scaffolding collapses. Take advantage of "Air Strike" Reaction Commands and aerial attacks to avoid taking damage and quickly eliminate the Heartless. Head to the second room called Lilliput; use the "Stomp Bomb" Reaction Command to push back the Aeroplanes and Hammer Frames while you defeat them.

The next area is called Scene of the Fire and it's arguably the hardest area of the four. The new Hot Rod enemy is annoying with its charge attack and you also must contend with the flames from the building that cause the gauge to rise which can also cause a failure. Use Valor Form if you need to, it should let you defeat the Hot Rods much easier. Head into the last area, Mickey's House, when you are ready. This is fairly simple, just defeat all the Rapid Thrusters and you'll receive the Window of Time Map .

The Hammer Frame is a relatively weak Heartless though its attacks can be lethal. Watch out for its Shockwave attack that causes a large pulse around it, usually followed up by a Hammer attack that smashes you with the head of the hammer. Lastly, it uses a spin rush that has the Hammer Frame use a spinning charge. Don't get caught up in a group of these or you could be bounced around for a little bit and take fatal damage.

The Aeroplane uses a Machine Gun attack that fires multiple bullets at the target. It also uses a Raiding Charge, an attack that sees it spin three times in a charge attack. Lastly, the Aeroplane uses Ram, a high damage attack that should be avoided then countered for best results. If you are having trouble getting in close to land melee damage then use Blizzard or Thunder to land better, more effective strikes.

Watch out for the initial Bite and One-Two Punch attacks that the Hot Rod uses to inflict mild damage. Once it reaches 50% health, the Hot Rod will whiz around the field charging at you. Be sure to Guard this attack!

Follow Pete to the Waterway where you'll see him taking the Cornerstone! Use Triangle to hit the items back at Pete; it will take six before he is knocked out and the boat comes to shore. Grab on to the hook and start breaking the cage, using Triangle to "Hang On" as the hook sways back and forth. If you end up letting go then you must defeat some Heartless and quickly continue your assault.

The best way to attack Pete in this fight is to wait for him to leap or flank him. Pete constantly throws out exploding bombs, uses a shockwave slam, and throws a Tantrum when he yells, "Get outta my way!" Use Past Pete to your advantage with "About Face" to launch him into Pete! When 20% of his HP is depleted, Pete will change the area to Scene of the Fire where you'll contend with the balls of flame amongst his normal flurry of attacks. At about 40% HP Pete will shift to Mickey's House where you must deal with the gravitational pull in the center of the room.

The scene changes to Lilliput at about 60% of Pete's HP, you have to deal with the cannons shooting at you during this phase. At 80% health the scene changes for the final time to the Building Site. When Pete gets launched up in the air be sure to use "Air Slash" to deal a ton of damage and end the fight.

After the battle Sora seals the Keyhole and receives the Monochrome Keyblade . The thorns are removed back at Disney Castle and the next two worlds are unlocked. In addition, Wisdom Form is unlocked and the " Pain and Panic Cup " is available at the Olympus Coliseum. Check these out in their respective sections or continue on with the main plot. 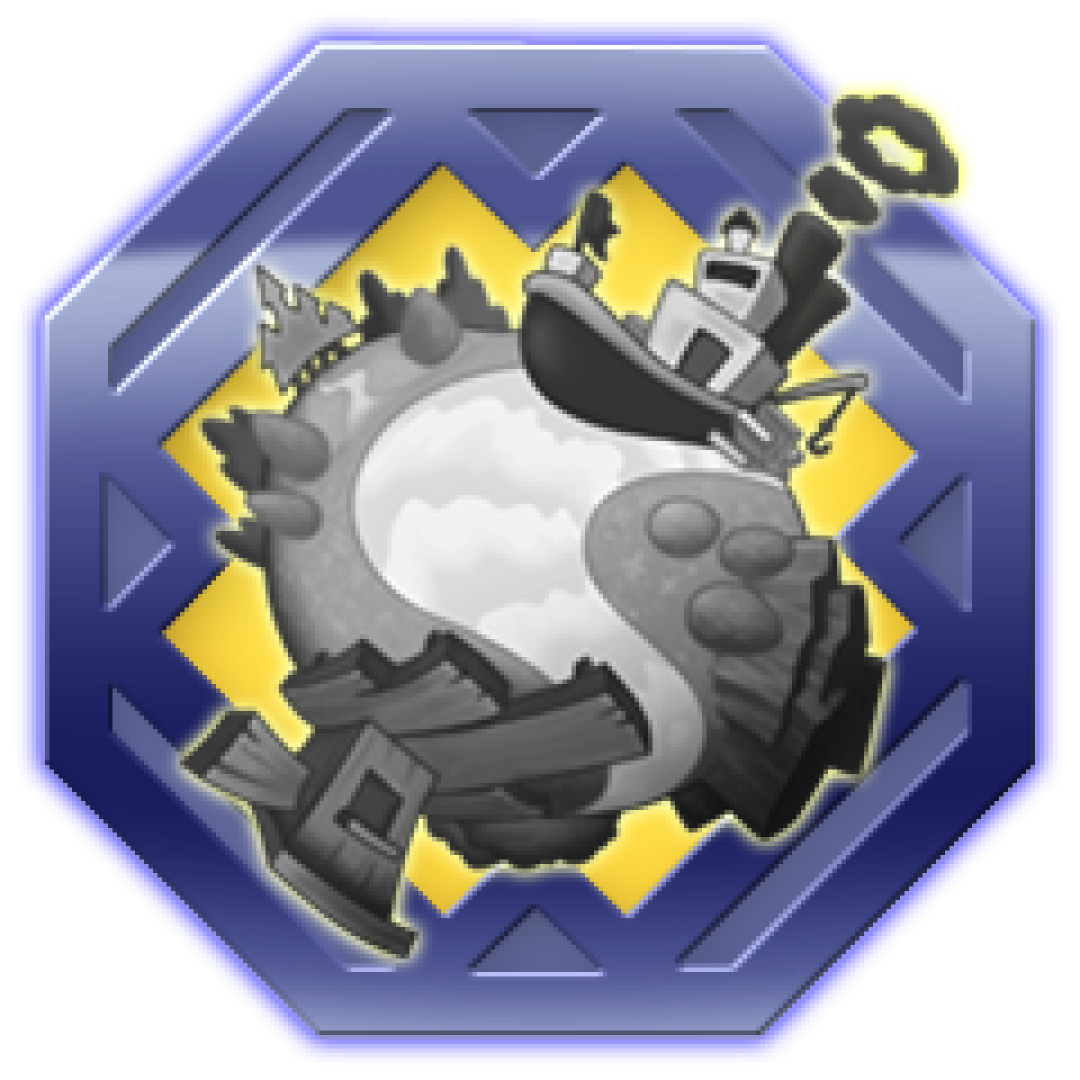