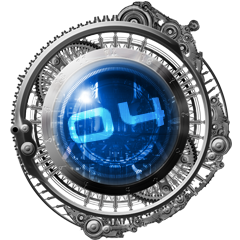 Acknowledged the threat facing the world, and decided to fight back.

Things turn ugly very fast upon arrival. Unlike most areas we've been through, you'll see all enemies onscreen in this timeline. You'll also fight an insane amount of battles, because new foes keep spawning all over the place. This is also the reason I won't be going out of my way to claim treasures, even those that are in plain sight. Wait until the AF4XX Academia timeline and nab them all then.

From the starting position go east, then examine the panel to change the colour of the nearby escalator from red to blue. Go up the escalator and then dash north into an Alley for a scene. Currently you're in a safe zone where enemies cannot pursue you.

Examine the yellow terminal to get the map of Academia and the notice about defeating robotic enemies in order to clear the barriers further on in the city. Turn left around the corner and check in.with Chocolina - she sells new weapons, new accessories and level 2 monster materials.

Talk to Miss Horizon, the blonde girl tending another of the yellow terminals to take on the quest of delivering all of your explored maps once you hit 100% coverage on them. This is a mammoth task and can be very time consuming so it is advisable you complete 100% coverage whenever you visit a new area if you can. We already have New Bodhum covered, so that gives AF400 ACADEMIA FRAGMENT - **Sunleth Waterscape** (01/13) + **200CP** ! Near the girl is a treasure cube with the **'Farewells' Gate Seal** that unlocks Time Reversal in AF300 Sunleth Waterscape.

The next point of interest is located after many twists and turns with lots of enemies blocking your path. We shall attempt the shortest route. From Chocolina go west and bash up some enemies that have surely amassed just beyond the barrier. Further west is an enemy group of 3x Koboldroid Yan. Dismantle them to remove the yellow barrier they've been protecting.

Now follow my instructions to the letter: Go south over a short catwalk, then turn east again to spot a Fencer, a big silver robot guarding another orange barrier.

With the robot gone so is the barrier. There's a set of stairs leading north which you should take... and fall into an event battle.

Afterwards proceed east downstairs near the escalator into Grand Avenue Square. At the bottom turn left onto Grand Avenue (note that a small section south from Grand Avenue is called Grand Avenue - Southern Block), main street and make a beeline straight west, fighting off waves of enemies. There will be another scene with Soul Edge. After it rolls, continue going west and go down the blue escalator into another section of Central Bridge. A scene of the bridge collapsing plays, and the enemies stop bothering you for a while. Take a brief detour south to find the Kaiser Knuckles .

Dash north and then west across the broken bridge, then turn north again and blitz through enemies for the panel, which changes the nearby escalator from red to blue. Take that escalator up, turn west into the New Town, and then turn south.

Note that by going further north you run into a huge monster Geiseric.As it dies it drops 1000 CP and 5000 gil , but it's very tough to defeat. Perhaps best left for later.

It is not necessary to do any grinding unless you wish to so do not worry too much at this point. Anyway, you're south-bound now - ignore the red escalator branching off west, and take the next road west. Then turn north and engage the Fencer that guards a barrier. Dismantle it then ride the blue escalator up. If you need supplies, Chocolina is to the right.

If your accessory capacity is at 100, you can equip three accessories that increase ATK by 10% to gain the synth ability Vampiric Strike 3% (3% of damage incurred is absorbed as HP recovery).

From Chocolina go west and win two event battles before it's time for Zenobia...

At the start of battle Zenobia immediately deploys several sets of tentacles which shield the boss from any harm. The tentacles are weak to all element magic and can thus be quickly destroyed, but don't dawdle too long because they can debuff you with Fog and Deprotect. With the tentacles gone, Zenobia now takes the full brunt of magic assaults, but still halves physicals.

Employing a SAB is not a shabby idea - Deprotect, Deshell and Poison debuffs are great ways to severely weaken Zenobia as you whittle down its HP. With about 75% of health lost, Zenobia deploys another set of tentacles (clearing any debuffs it has incurred). This time the tentacles can also attack as well as heal Zenobia. Destroy them with a set of three RAVs, briefly switch to triple SEN to reduce damage from an incoming attack as the tentacles protrude from the ground below your characters, and then finish off Zenobia as well.

For a perfect Cinematic Action you get Crystal Petal , and AF400 ACADEMIA FRAGMENT - Zenobia Fragment (02/13) + 6000CP !, as well as the Tower Artefact which activates the shiny gate in New Town, in the north portion of the area. Go north to find the shiny gate in question and use it to unlock AF200 Augusta Tower timeline.