Enter the Research Facility at the extreme north and talk to Alyssa or Hope to move things along. Address Hope two more times for a Live Trigger: (Hope has traveled 400 years into the future. What should I ask him?) and then collect the Live Trigger Cube that appears on the right side of the room. Go back to Hope and align your camera so that you see the ledge on the bottom, and on that ledge is a treasure sphere! Aim Moogle Throw carefully to get the Platinum Casino Ticket .

To get the Silver Chocobo , align your Moogle Throw into the big sphere projection behind Hope. If you’re lucky, Silver Chocobo is yours! Keep trying until you get him. He is the best Sentinel in the game and is invaluable later on during post-game when you fight the super hard enemies.

Now talk to Alyssa two times to learn that Hope and Alyssa need several Graviton Cores in order to put their master plan to fruition. If you check with the receptionist at the front desk in the Entrance, she gives you details on seven Graviton Cores. You have to get five of them in order to progress with the game. If you talk with Hope one more time, he’ll tell you about the Chaos Crystal , which turns out to produce two amazing weapons for Serah and Noel, but you need to gather all 160 fragments for that power to be released. Now to hunt for the graviton cores’ locations!

Warp to AF003 New Bodhum and go to the Tidal Shallows, which is the eastern part of the middle of the map. There are two metallic platforms, and one of them is raised a bit. Hop on the raised platform and there will be a concealed item. Use R1 to reveal it and nab AF003 NEW BODHUM FRAGMENT - Graviton Core Alpha (04/04) + 500CP ! Leave to the Historia Crux.

Warp to AF005 Bresha Ruins. Grab a chocobo, and from the central shiny gate in the Echoes of the Past pillars area ride east to the staircase leading down to the south. Jump over the staircase’s stone fence to the left and Mog’s bobble will start glowing. Hidden in the grass is a concealed item. Use R1 to reveal it and nab AF005 BRESHA RUINS FRAGMENT Graviton Core Beta (03/08) + 500CP ! Also floating in the grass is a treasure sphere with 8x Power Droplet . Now you can leave to the Historia Crux.

Use the chocobo to jump on this roof (left). Graviton Core Beta location. (right)

Warp to AF200 Oerba. From a big tree in the middle of Village Proper walk briefly south east to spot a pile of sand against the stone fence. Grab a chocobo and by choco-jumping from this pile of sand you can land on the nearby roof of the of the building next to Chocolina’s shop. There’s a concealed item floating around - Use R1 to reveal it and nab AF200 OERBA FRAGMENT - Graviton Core Gamma (04/05) + 500CP ! Leave to the Historia Crux.

Warp to AF400 Academia (great). Head to Chocolina’s shop in New Town. Going north from Chocolina’s is a red escalator leading to a dead end. Go down the escalator to find a concealed item. Use R1 to reveal it and nab AF400 ACADEMIA FRAGMENT - Graviton Core Delta (03/13) + 500CP ! Do not leave the timeline yet! Also next to Chocolina’s shop is a blue escalator leading down to the south - jump down it, and then make an immediate 180-degree turn to find the next escalator leading down to the north. At the bottom again make a hard 180-degree turn and walk as far south as you can to discover a crystal gate in New Town! Use a Wild Artefact to activate the crystal gate, which unlocks the AF100 Yaschas Massif timeline. 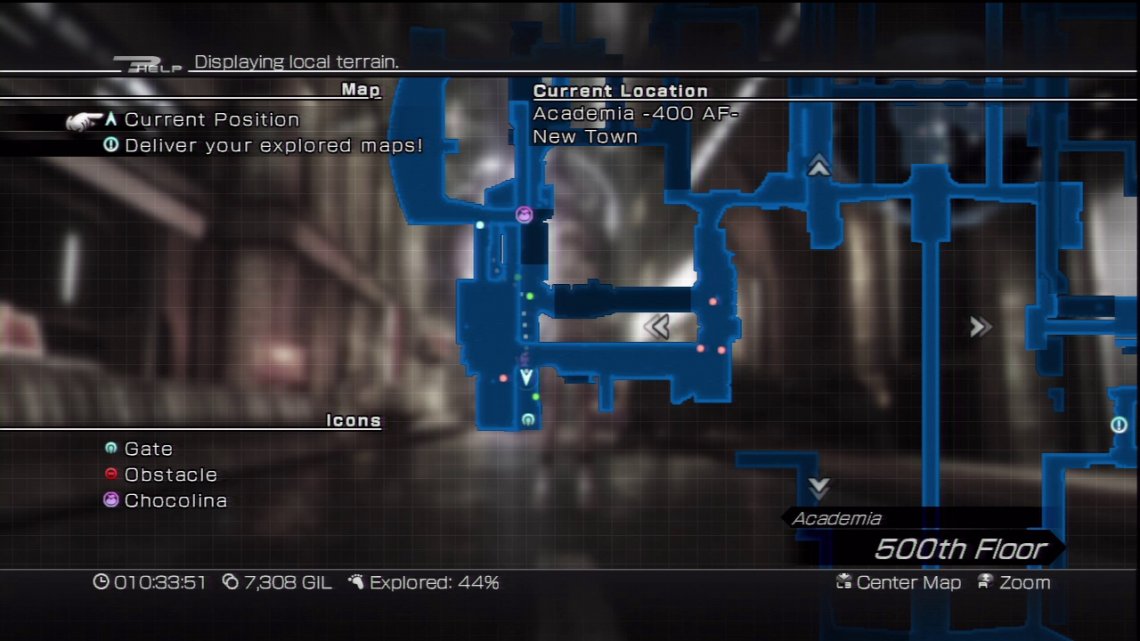 Find the Crystal Gate in the southwest corner of the map.