This quest isn’t too different from a standard hunt, and you should already know what to expect from a Kula-Ya-Ku. The difference here, then, is preparation. Visit the Provisions Stockpile and buy at least one Trap Tool, but ideally you’ll get a couple. They cost 200z each, they’re not individually expensive, but it can add up.

When you have those components, go interact with your Item Box and select the "Crafting List" option, which will allow you to craft with all your resources at your disposal. Craft at least one Shock Trap and at least two Tranq Bombs - or get some EZ versions from the Supply Box (capture missions tend to give you the tools outright, along with a bonus Trap Tool in case you need more). Keep in mind you can only carry type of each type at a time, although the EZ versions do not conflict with normal versions, so you could carry a Shock Trap and an EZ Shock Trap at the same time. You can also carry two Trap Tools and some Thunderbugs, giving you the ability to craft more Shock Traps on the go, if necessary.

Note: Generally, opting for Shock Traps is easier than creating Pitfall Traps, as the latter requires Nets, which in turn require Spider Webs and Ivy. The former can be cultivated later on, while the latter cannot, although you can farm it if you’re willing to put in the time. It can be found in AREAS 13, 15 and 11. While not terribly abundant in any one place, learning its locations, doing some runs, and wearing gear with the Botany skill can make this harvestable in a reasonable time frame.

Now that the how has been covered… how about the why? Capturing monsters is ideal for two good reasons; first, you don’t actually have to do all the work of killing the monster. As soon as it has a skull by its icon, just follow it back to its lair, wait for it to sleep, then drop your Shock Trap. Failing that, if it refuses to retreat, just drop your Shock Trap near it. Once ensnared simply run up to it and drop a Tranq Bomb or two near its head. Taa-daa! Captured monster. The second reason to capture them is simply because you get greater rewards for doing so. What’s not to like? Less hassle, more rewards.

As for the quest itself, this hunt takes place in the Wildspire Waste, not your usual Kulu-Ya-Ku stomping grounds in the Ancient Forest. That said, the critter likes to steal eggs, and there are at least two nests in the Wildspire Wastes, a Rathian nest in AREA 12, and an Apceros nest in the southern reaches of AREA 4. The Kulu-Ya-Ku lairs in a cave along the northwestern end of AREA 6. 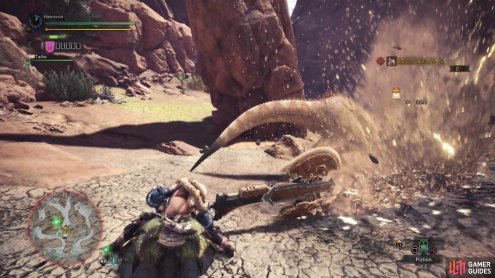 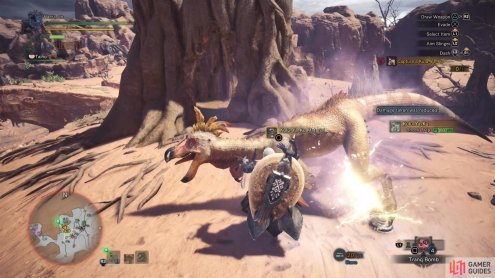 So much for the build up, the execution is, by comparison, pretty simple. Or at least, redundant, in that you’ve already fought a Kulu-Ya-Ku, and should already know how to fight one. Be sure to research it thoroughly before engaging - if your Scoutfly Level isn’t three, you won’t know when it’s near death save by watching its mannerisms. If he head for its aforementioned lair, that’s an obvious sign it’s hurting… but a skull by the icon is more fool-proof. When it’s nearly dead, drop a Shock Trap near it, then drop a Tranq Bomb (or two, just to be sure) near its head.

Note: To place a trap, you need to be on a dry, relatively stable surface. Some ground isn’t suitable for deploying traps, like the swamps in the Wildspire Waste. Fortunately you can almost always find a dry patch somewhere to deploy a trap, then lure the monster onto it.

Note: It’s worth noting that if a monster flees to its lair and goes to sleep, you can use Tranq Bombs to weaken it before deploying a trap, and it’s actually easier, as it’s head isn’t moving around at all when it’s sleeping. It should get captured as soon as it’s caught in a trap if you use Tranq Bombs first.

After completing the quest Snatch the Snatcher, return to Astera and find the Smart Biologist in the northwestern end of the city, near the Ecological Research station. He’ll reward you with 500 Research Points, after which you can immediately talk to him again and he’ll have another request for you. This time he wants you to capture a Barroth, and to this end posts the quest Landing the Landslide Wyvern.