Return up the lift and check the ceiling for a Writhing Rotten Flesh near a small alcove that leads to a Cathedral Evangelist and a Deep Gem .

The other door has a Giant Slave that attacks as you walk around the outside of that level, but you can actually have him rise to his feet as you exit the doorway and then target his head while rolling back into the doorway to avoid damage.

You can now circle the area to defeat more Devouts while collecting the Soul of a Nameless Soldier , Lloyd's Sword Ring , and Exploding Bolts .

Head down the stairs and take the first left and rush across to the other side, turning around to defeat the three Hollow Slaves, and then pick up the Seek Guidance spell. The ladder leads to the area where the crossbow Devout was shooting at you, but be careful of the Evangelist that stands between you and the Ember.

Now take the stairs down to find a Mimic with the Deep Braille Divine Tome .

Take the stairs down and head forward until the Cathedral Knight exits the archway ahead and focus on your defense. These enemies don't have as much poise as a Darkwraith or Black Knight, but they deal a ton of damage if you let them attack you.

Back up and bait them into an attack before you counter and don't be afraid to race in when they go to buff themselves, as they leave themselves wide open. If the Cathedral Knight does buff his weapon you'll not only have to evade the initial attack, but also the magic explosion that is slightly delayed where he struck.

Enemy Info: Cathedral Knights are heavy damage dealers that use buffs to increase their already powerful damage. Bait them into an attack and strike with a combo, but back off before you run out of stamina.

The shielded versions can be stunned by striking until they run out of stamina, but don't take an aggressive tactic with the greatsword versions.

Enter the archway at the back of the room to find an Ember and then turn around roll past the huge spider-like Deep Accursed to exit the room. These enemies cause curse build-up through their bites and the fog they spew, but if you attack with ranged attacked through the archway that they can't pass you shouldn't have to worry about this at all ( Aldrich's Sapphire ).

Exit the room via the stairs leading up to the waterway and watch out for the Hollow Slaves and poisonous mist along the side of the area.

If you're embered you'll be invaded by Longfinger Kirk, wearing a Spiked Shield and using a Barbed Straight Sword . Longfinger Kirk is easy to interrupt and he often will use a jump attack that leaves him open to attack, so you shouldn't have much difficulty killing him.

Head through the water toward the large double doors to find a Soul of a Nameless Soldier and Maiden Armor Set and then head outside to find the Saint Bident and Homeward Bone x2 .

Make your way back to solid ground and check the left side of the area, across from where you entered, to find more Hollow Slaves and a Cathedral Knight and then take the doorway to final another shortcut to the Cleansing Chapel.

Ignore the doorway with a lift inside, as this will ruin the quest for an upcoming NPC, and head back to the waterway.

The second Giant Slave stands in a pool of water with some Rotten Flesh and can be dealt with by attacking near the corner on the opposite side of the area, allowing you to use ranged damage and then take cover when the giant swipes water your way.

With the Giant Slave defeated you can kill the remaining Rotten Flesh and collect the Drang Hammers , Drang Armor Set , Pale Tongue , and Large Soul of an Unknown Traveler .

The stairs lead to an altar outside the boss arena with some Deacons of the Deep and Cathedral Knights. Focus on killing the Deacons first with ranged attacks and then pull over the Cathedral Knight sitting on the pews, fighting it away from the other, and then deal with the greatsword knight.

Defeat the remaining Devouts on the pews and then take the archway across the room to find a lift that leads to the main doors of the cathedral, the one that was locked near the graveyard section. Open the double doors and refresh the area by using a Homeward Bone to return to the Cleansing Chapel or Firelink Shrine.

The quickest way back to the cathedral is to exit the chapel through the front door, drop into the riverbed, and climb the ladder to reach the main doors.

Head down the stairs on the right to find a Duel Charm x3 near the man that looks like Siegward, though speaking with him will make it obvious that it isn't Siegward, and then cross the beam behind him for a scene.

Head back to the Cleansing Chapel and take the shortcut on the left, heading up the lift you ignored previously.

Kill the Devout with a crossbow and climb the ladder outside to reach the next level with a Deacon, who drops a Deep Ring. Roll onto the buttress below and make your way up it, watching out for the Hollow Slave that crawls up the side and the crossbowmen in the area below, and then turn left and kill the Large Devout.

There is another Large Devout with a halberd straight ahead and as you continue forward youll encounter a number of Hollow Slaves.

Check the right side of the path as you pass each rooftop to eventually find another buttress that leads down to an Arbalast and then head back up and follow the path to a dead end with a Pale Tongue .

Head back and check each alcove until you find one that leads to the rafters of the cathedral and then carefully make your way across them to the right. Lure the Cathedral Knights and Hollow Slaves to attack at the corners of the cross sections, causing them to fall off, and then collect the Blessed Gem near the Cathedral Knight with a greatsword.

You can now head to the other end of the rafters where there are two more Cathedral Knights, one of which has a crossbow and can be lured to attack with his mace by getting close enough or killed with ranged attacks.

Between the last cross section, on the opposite side from the entrance, look down to spot a platform that you can roll to and then drop onto the wooden stairs. Look up at the ceiling of the area to spot some Man-grubs that you can shoot down with arrows and then kill the Man-grub with a staff.

Unbreakable Patches is standing in this area and if you call him out you'll obtain the "Prostration" gesture and a Rusted Coin and then purchase the four piece of Catarina armor from his inventory.

Take the stairs to another area with a group of Man-grubs just waiting to fall from the ceiling above and turn the corner to deal with the sorcerer first. Use ranged combat or strike and then back up to avoid damage and then kill the non-aggressive Man-grub at the other end to obtain the Red Sign Soapstone .

You can now enter the doors behind the bent gate to find a bonfire, the Armor of Thorns Set , and the Rosaria's Fingers covenant.

Use the bonfire to travel back to the Cleansing Chapel and then head outside and approach the well to find Siegward of Catarina . Drop his armor into the well to obtain the "Rejoice" gesture and exhaust his dialogue so that his quest will continue.

You can now head through the shortcut in the Cleansing Chapel to return to the waterway area that had the Giant Slaves and make your way to the boss arena near the Cathedral Knights. 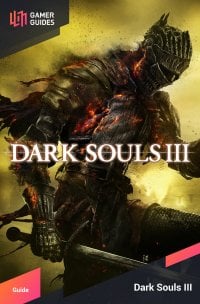 “Only in truth the lords will abandon their thrones and the unkindled will rise. Nameless accursed undead, unfit even to be cinder.”

You are an Unkindled, a being of ash, unworthy of becoming even a Lord of Cinder. You awaken in the Cemetery of Ash to the tolling of a bell, signalling the approaching end of the First Flame. You must seek out the embers of the First Flame and defeat the Lords of Cinder so the flame can be linked again.

“And so it is, that ash seeketh embers…”

As you journey through the treacherous realms of Lothric, our guide will be a constant companion. Inside you will find: