You learned at the end of last mission that Lord Shimura wants to meet with you, by the still waters under the red-leafed tree, which turns out to be Omi Lake by your estate, or the place where you sparred during the flashback at the beginning of the game. Fast travel to Omi Village and head south-by-southeast to the predetermined meeting spot. When you arrive, you see Lord Shimura is not there, so you decide to wait on the dock for your uncle. Eventually, Lord Shimura will arrive and after a conversation, you decide to take a ride with him. While riding, you encounter a peasant who has gotten his wagon stuck in some mud. Push the button when you’re behind the cart (left), then mash the button that appears on your screen to get it free from the mud (right)

After the conversation with the peasant ends, get behind the cart, hit the R2 button, then mash on the X button. Remount your horse and continue your ride with Lord Shimura. You will eventually arrive at your family’s cemetery, where you have to write another haiku.

This is your final fight of the story and Lord Shimura is definitely no pushover, but you should have plenty of experience under your belt now. Before moving on to the actual maneuvers he has in his arsenal, it should be noted that you’re forced to wear the Ronin Attire for this duel and you can’t change out of it. This can be a bit of a bad thing, especially if you have the Sakai Clan armor leveled for the health bonus or not have the Ronin Attire leveled at all. First off, you will want to stay in Stone Stance for this battle, as it allows you to break his guard much more easily. 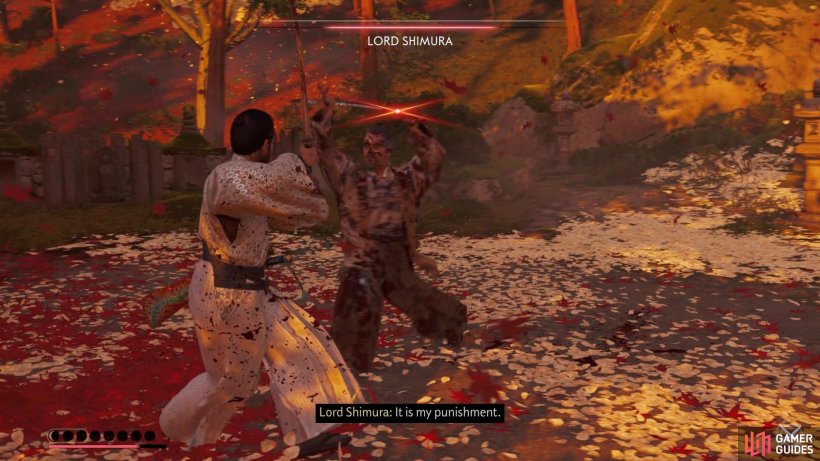 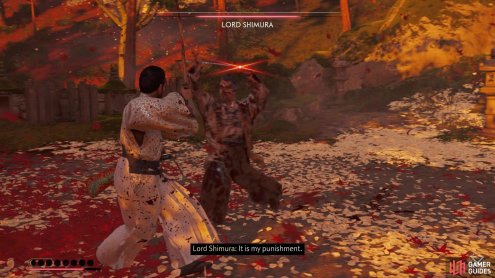 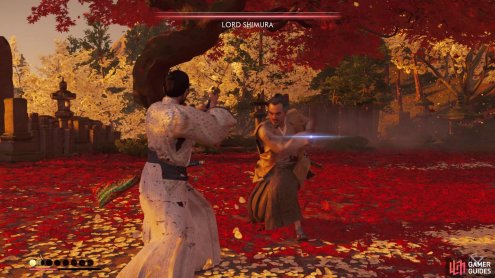 The overhead attack with him grabbing the blade is the first of a three hit combo (left), The attack from the back and forth darting can be blocked with the right skill (right)

Shimura has an unblockable attack where he runs at you and tries to do an overhead slicing attack. He also has a stabbing attack that can be parried if you have the correct skill for it. There is also the familiar two-hit combo whenever he sheathes his sword, with both hits being unblockable. As you whittle his health down, Shimura can perform a three-hit combo that is all unblockable, starting with an overhead swing, then an upward and the third hit being another overhead. There are also a lot of other combos that are in Shimura’s repertoire, like an overhead attack where he grasps his blade with both hands, then follows it up with a spinning horizontal slice and finishes with a blue-tinted attack.

You will also witness an attack where Shimura darts from side to side, then performs a two-hit combo; both of these strikes can be parried with the correct skill. The one stabbing attack mentioned earlier can sometimes have a small delay in hitting you, which is about the only real trick up Shimura’s sleeve. Since you never know whether the stab will come quick or be delayed, there’s no telling when to press the parry button, so there’s a high chance you might get hit by the delayed one.

Upon finishing him off, you will have one final task on your plate, to either let Lord Shimura live or to kill him. There will be a different ending depending on your choice, but there’s not trophies assigned to picking both options, so it’s entirely up to you what you want to pick. Your choice here affects the ending

Congratulations! You’ve beaten the main story of Ghost of Tsushima. After the credits are over, you will be put back in the open world, but you won’t be able to fast travel just yet. Exit the building for a short cutscene, then you are free to finish up anything you didn’t before you completed the story.