Head on through the first room, past the statue here and into the chamber beyond. In the centre of this area you will see a giant cage with a lever out of reach inside. Go into the door to the right and use the summoning circle here to summon a Dead Lord. Return to the main room and have the Dead Lord use the lever in the centre of the room to open the locked door.

Here you will see a platform on the far side that we need to cross over to. Between us and the platform however you'll find quite a hefty gap. Before doing anything else, Look up at the bottom of the left hand cage and shoot the crystal for a Stone of Power. Now lets head into the door to the right. As you enter a group of undead prowlers and skeletal champions will spawn. If you want to make things a little quicker head over to the summoning circle to have a Dead Lord help you out.

When the room is clear, pull the switch in the back right hand corner and return to the entrance. Get the dead lord to cruise over to the pressure plate opposite. This will raise the nearby platform. Drop down into the pit below and push the pedestal between the two platforms here to create a platform between the two and climb back out. Jump across the platforms and pedestal to reach the other side.

Before heading down the stairs here, check the small area to the left for a chest and the right for a Soul Arbiter's Scroll. Continue down the stairs and through the door. Walk forward until you see a scene. Geez, this game loves making you go and find three of certain things in different dungeons doesn't it?! We'll now have to go and locate three souls. It happens that the three souls are in three different towers around the dungeon, so let’s get started. 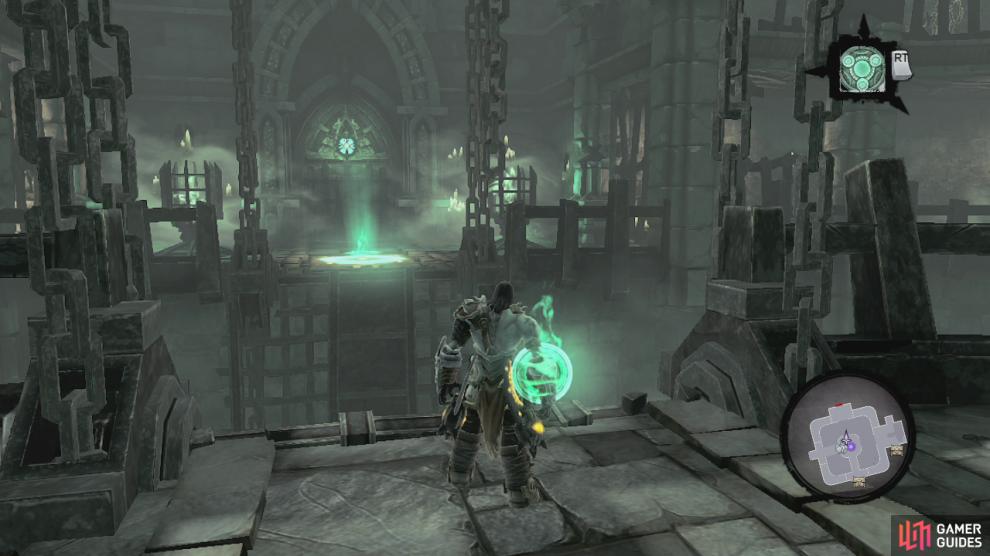 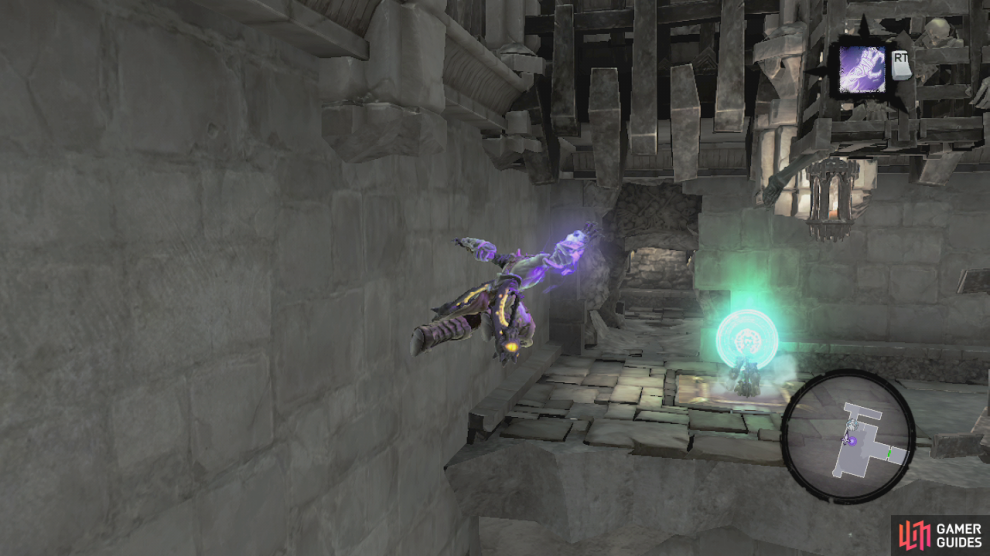 This guy is fairly easy and there are no real tricks to taking him down. Simply dodge his attacks and counter attack when you see an opening. He does have a lot of health and a bigger move set than the regular enemies running around, but shouldn't be too hard.

Now that he is dead, head through the now open doorway and then climb the stairs opposite to the door at the top.

Use the summoning circle here and get the Dead Lord to activate the pressure plate in the Northeast corner of the room. This will flip a couple of sections of wall around. Wallrun across to the second block and instead of jumping again, let him run until he drops and you will land on a platform with a chest. Wallrun over towards the platform with the Dead Lord and use your death grip on him to pull yourself across. Enter the nearby passageway. Inside turn to the left to find a Book of the Dead page, turn around and use death grip to cross the gap.

Throw the switch at the top here and head over to the open gate nearby killing any skeletons that get in the way. Inside, follow the balcony around to the left to find a chest containing the skeleton key. Continue around to the other end of the room to find another chest here. Return to the previous room and drop down the hole next to the lever. Before heading back to the door, enter the hallway to the East of the summoning circle. In here the camera should change and show you a death grip ring. wallrun up to this and up to the handhold. Move to the left and drop down to find a platform hosing a relic of Etu-Goth. Run back up to the previous handhold and use it to wallrun to the left to find a chest.

Drop back down and return to where we fought the Tormentor. Kill the skeletons in here if you like and when you are ready, open the locked door to enter a the second tower, which is a tall circular room similar to the one containing the first soul.

Cruise up the stairs to the right to find a death grip hook. Climb up to the central ledge. From here look to wards the next death grip hook and to the right to see another Book of the Dead page – death grip this. Now grab that ring nearby to start off a platforming sequence, continue along using all the hooks and handholds until you emerge at the top of the tower. Grab the soul from the cage here. Grabbing this will trigger an undead stalker and a pair of skeletal champions to spawn. Dispatch them and drop back down to the room just to the right of the statue here to find a set of broken stairs below with a chest Drop down into the water at the bottom to find a Boatman’s Coin . Backtrack back to the Judicator. 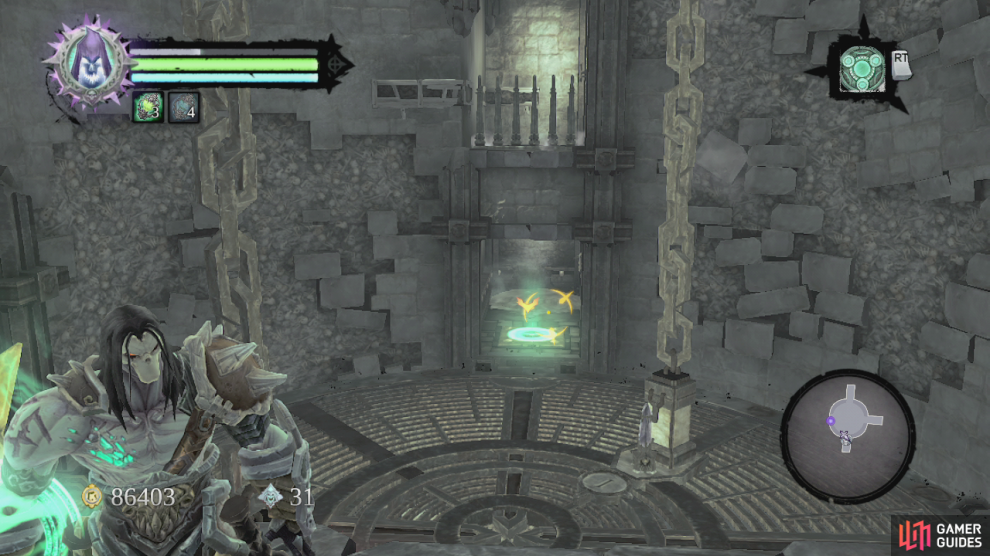 The Bone Keeper will hang suspended from the roof out of range of your melee capabilities for the duration of the fight.He will however continue to summon wave after wave of skeletons at you. Fight them until you have breathing room to fire off a few shots at the bone keeper with your pistol, and then return to killing skeletons. Repeat until he is dead.

It’s not over yet though! As the Bone Keeper bites the dust, a new challenger appears…

This boss plays out in essentially the same way as the ice giant from the prologue. He is big and slow moving, let him perform his attack then go in for the kill. Rinse and repeat.

When he is dead, return to where you jumped up and rather than dropping down right away, follow the railing around to the right to find a Book of the Dead page. Drop down to the room below and head all the way back to the Judicator.

After a short scene you will get a new objective and a message indicating the completion of the dungeon, huzzah! Note that when using interdiction from now on you will have two dead lords to command.

We are all done here so feel free to fast travel back to the Eternal Throne. If you feel like restocking potions or selling your trash, go for it. When you are ready then head back to the Gilded Arena.